Despite the lacklustre market conditions of 2019, Khazanah Nasional Bhd recorded its highest profits ever of RM7.36bil compared to losses of RM6.27bil in 2018.

The fund’s hardwork had seen fruition as it managed to reduce its expenses by 28% year-on-year, and its debt by 17%. The sovereign wealth fund declared RM1bil in dividends to the government for 2019. This was thanks to big gains from its disposal of some overseas assets including its shares in e-commerce giant Alibaba Group Holdings Ltd.

Khazanah, whose asset values now stand at RM83bil, had been created to grow the nation’s long term wealth.

It is invested in the country’s critical sectors, through major holdings in companies like Axiata Group Bhd

Khazanah’s goal is to sustainably increase the value of its assets as well as to enhance economic outcomes to meet the nation’s needs over the generations to come.

For 2019, Khazanah attributed the boost of its profitability to higher divestment gains, which increased to RM9.9bil compared with RM1.4bil previously, as well as a robust investment portfolio.

For comparison purposes, the local stock market measured by FBM KLCI index, fell 4.7% in 2019. This was due to uncertainties in the global landscape, which saw a prolonged Brexit process as well as the heightening of the US-China trade war.

Khazanah has reduced its operational expenditure (OPEX) by 28% from RM674mil in 2018 to RM484mil in 2019, due to a decrease in nonrecurring costs and closure of selected regional offices.

As part of a refreshed mandate introduced in 2018, Khazanah is pursuing two distinct objectives through a dual-fund investment structure.

The first is the “Commercial Fund”, which is an inter-generational wealth fund. This fund generated a time-weighted rate of return of 8.3%, surpassing the long-term targeted rate of return equivalent to the Malaysian Consumer Price Index plus 3% on a five-year rolling basis.

As at December 31, 2019, the Commercial Fund’s net asset value (NAV) stood at RM73.1bil. Amongs its focus for the Commercial Fund include the flexibility to invest across multi asset classes in different geographies in accordance with its Long-Term Strategic Asset Allocation with a mix of active and direct investment strategies, and external fund managers.

Khazanah said after one year into its portfolio rebalancing exercise, it has progressed significantly towards diversifying the Commercial Fund under the refreshed mandate and is well positioned to increase its investment activities in 2020.

The second is the “Strategic Fund”, which is a developmental fund to meet Khazanah’s strategic investment with long-term economic benefits, including holding strategic national assets. This nclude its stakes in Malaysia Airlines, Malaysia Airports Holdings

Last year, the Strategic Fund generated an overall return of 2.9% compared to the targeted rate of return of the 10-year Malaysian Government Securities (MGS) yield on a five-year rolling basis.

In 2019, Khazanah successfully achieved a resolution on the PLUS Malaysia toll restructuring, which will see an 18% reduction in toll rates on PLUS highways. There will also be a savings to the government of RM42bil over the new concession period ending 2058. The restructuring also ensure that Khazanah and the Employees Provident Fund (EPF) would remain as PLUS shareholders. “This restructuring is now at the stage of discussions with stakeholders to put into place the necessary amendments to existing agreements,” Khazanah said.

However, Khazanah reckoned that this year will be extremely difficult for it to achieve the same levels of success as in 2019 due to the uncertainties of global economic growth due to the coronavirus (Covid-19) fallout. Nonetheless, Khazanah expected to mitigate the impact, thanks to its diversified portfolio and robust investment strategies. 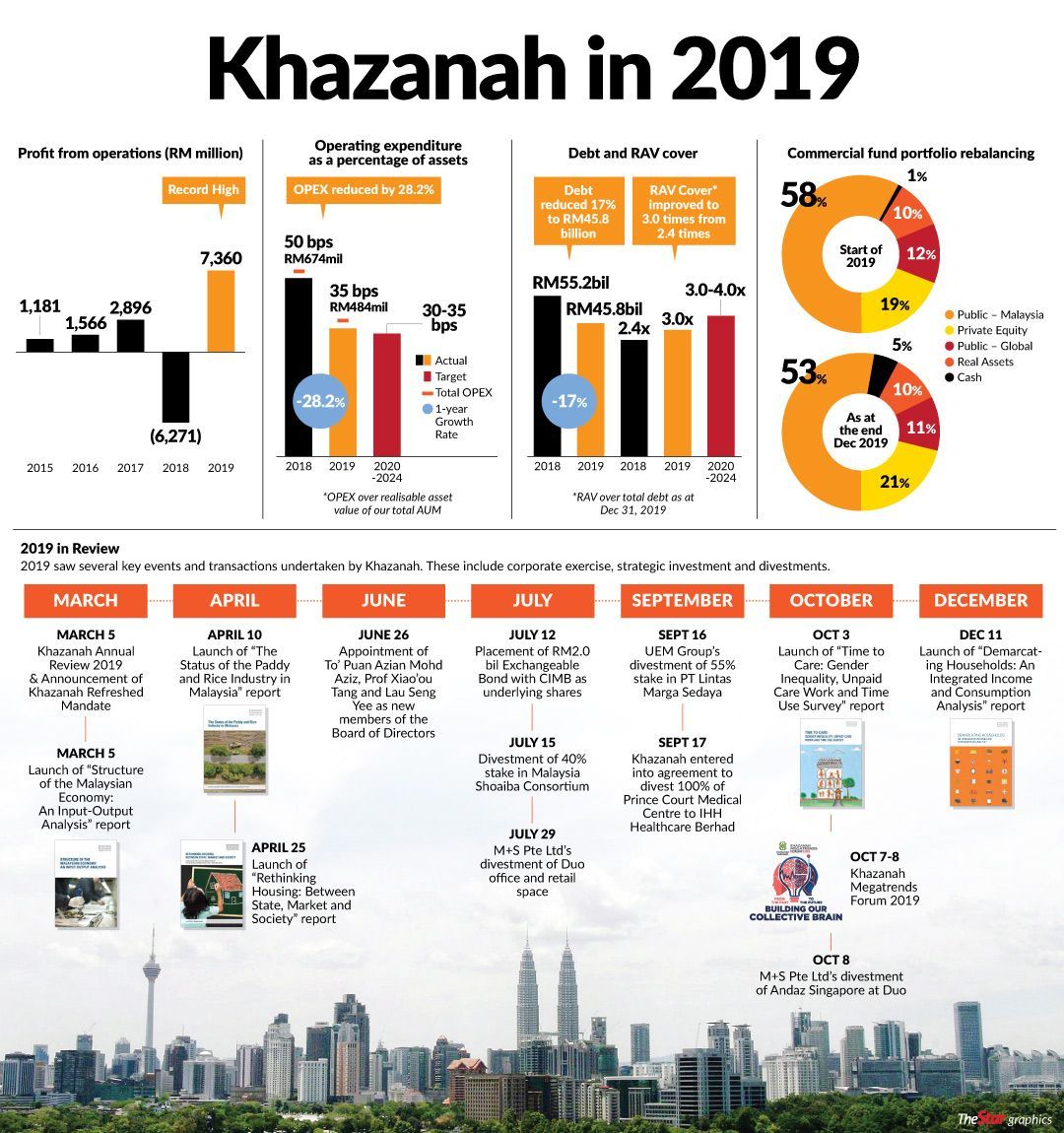 O&G and gold stocks in the limelight on Bursa