continued to underpin the FBM KLCI’s advance and keeping the stock market on track for the seventh straight days of gains.

Bloomberg reported Asian stocks were mixed after strong global gains Monday that saw US shares close higher for a fifth day. The dollar remained under pressure.

Shares dipped in Japan and saw modest gains in South Korea and Australia. S&P 500 futures climbed after the benchmark rallied for a fifth session, with tech gains pushing the Nasdaq Composite to a record high, according to the wire report.

At Bursa on Monday, foreign funds were net buyers at RM79.9mil and local institutions at RM61.2mil while local retail investors took money off the table with net selling at RM141.1mil.

Bank Negara’s Monetary Policy Committee meeting is set to deliver its decision on the overnight policy rate this afternoon. A pool among economists had indicated the central bank could reduce the OPR by another 25 basis points to 1.75%.

fell 2.5 sen to 87 sen with 22.9 million shares after it posted losses in the first quarter ended March 31, battered by travel curbs due to onset of the Covid-19 pandemic then.

AmInvest Research was maintaining its Sell recommendation on AirAsia after the low-cost carrier disappointed in 1QFY20 with a core net loss of RM502mil vs. its full-year forecast and the full-year estimates of RM1.48bil and RM1.05bil net loss respectively. 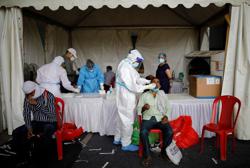