Nissan to bank on Rogue

Hot segment: The third-generation Nissan Rogue will replace its seven-year-old predecessor in one of the most competitive segments of the the US market – crossover SUVs. — AP

TOKYO: Nissan Motor Co is counting on a spunky SUV to help turn around a sales slump in the United States and staunch the flow of red ink draining its coffers.

The third-generation Nissan Rogue will replace its seven-year-old predecessor in one of the most competitive segments of the US market: crossover SUVs. Nissan desperately needs a hit to rekindle buyers’ interest and spur sales in what was once the company’s most profitable region.

Nissan’s US sales slipped 9.9% last year and sank 30% in the first quarter of 2020. Amid that carnage, the Rogue was its top seller in 2019 with deliveries of 350,447 vehicles – more than a quarter of total US sales and well above volumes for the Altima sedan and Sentra compact car, its next two most popular models.

The turmoil at the company’s US operations, which just lost its third chief in less than two years, is a sign of the depth of the problems facing Nissan after the late 2018 arrest and ouster of former chairman Carlos Ghosn. The Yokohama-based automaker last month posted its biggest loss in 20 years and announced the latest in a string of restructuring programs, this time promising to cut 20% of global production by 2024.

“The Nissan Rogue is our best-selling vehicle and becomes the new tip of the spear leading our US transformation plan, ” Ashwani Gupta, Nissan’s chief operating officer, said in an emailed statement. The new car will be the first of five new models that the automaker will roll out for US consumers over the coming year, he added.

“Each launch of Nissan’s 12 new cars will be a crucial stepping stone for its recovery, ” said Takeshi Miyao, an analyst at Carnorama in Tokyo, adding that its brand value has already hit the bottom. Nissan is also planning new models in Japan and other markets.

Nissan shares rose as much as 8.6% by midday Tuesday in Tokyo. The stock has declined about 30% this year.

The Rogue has outlasted now-discontinued SUVs by Nissan such as the Juke and X-Terra and people familiar with the automaker’s thinking say Nissan is considering dropping the smaller Rogue Sport model as well. The Rogue will face off against a pair of chief rivals: Toyota Motor Corp’s RAV4 and Honda Motor Co’s CR-V.

“The Rogue is an especially important car for Nissan” as its chief money-earner, said Tatsuo Yoshida, a Bloomberg Intelligence analyst. But the market dynamics have changed, he said, noting US and Korean automakers are also riding a shift away from sedans. “The battlefield is shifting to mid-size SUVs.”

The number of crossover models has more than doubled since the original Rogue debuted in 2007, and the segment is expected to be one of the fastest-growing in terms of new launches, from about 100 vehicle models being sold this year to more than 150 by the 2024 model year, according to Bank of America.

“This will be the most crowded segment in history, ” Bank of America auto analyst John Murphy told reporters Thursday on a conference call. “It does put at risk the excess profits that have been earned by these jacked-up station wagons.”

Nissan said the new Rogue boosts 10% more horsepower than the current model, and a one to two miles per gallon improvement in fuel efficiency above the outgoing vehicle’s 26/33 mpg.

The latest Rogue won’t offer a third-row configuration like earlier versions or a hybrid gas-electric powertrain to match the RAV4. It will only be sold with two-row seating and a four-cylinder gas engine, a move designed to keep complexity and costs down. — Bloomberg 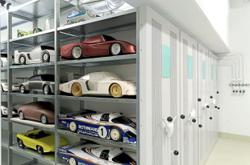 Treasure trove of car history: a peek into the archives of automakers