will see some impact on its profit margin from the East Coast Rail Link (ECRL) works should the Covid-19 pandemic be prolonged.

“It is lowered due to the costs incurred from the pandemic. We are expected to incur additional costs actually, ”.

“For example, previously we could do this project with 100% capacity but in certain months now, we can’t anticipate that we will be able to operate at full capacity due to the pandemic.

“This is why I lower my expectations for a very low profit margin, ” he told StarBiz in an interview.

Abdul Rizal said there are also costs that would have to be borne by contractors from an expected increase in labour charges following the strict standard operating procedures that needed to be complied with.

“These include the wearing of masks and the provision of sanitiser at the workplace, ” he said.

The company had at the end of May received two projects from China Communications Construction (ECRL) Sdn Bhd for ECRL works with a contract value of RM81.18mil.

These were for Section 5 and 6 of the ECRL project that covers the construction and completion of subgrade earthworks as well as drainage and culvert works.

He said for the company’s current active ECRL contracts, some 40% would be tendered out to local subcontractors.

“This is our plan for security, miscellaneous works that will be farmed out to the local subcontractors of between 30%-40%, inclusive of raw materials.

“We have opened job vacancies for the east coast states as well for easier communication due of the dialect barrier, ” he said.

Abdul Rizal said the company has also tendered for up to RM27mil in additional ECRL jobs.

“The ECRL jobs are actually based on an open tender basis. Based on the capacity we can handle now, we have confidence for the future (to secure more projects), ” he said.

The Gadang group’s overall order book is now at between RM1.4bil and RM1.6bil for the construction of the Mass Rapid Transit project, TRX City and Hospital Cyberjaya. 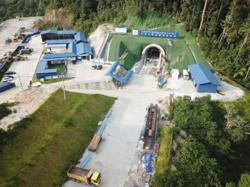