Genting Highlands has for a long time been a hive of activity. Day trippers, tourists and gamblers often head up the mountain, navigating through congestion to spend time up on the hill.

Nowadays, though is a stark contrast to how things were. The crowd has disappeared and the roads are generally empty. Roadblocks manned by police and guards of the Genting group are the only people seen around the popular tourist destination.

“The theme park looks like a ghost town, ” says a motor mechanic who has gone up the hilltop casino-resort a few times since March 18 when the movement control order (MCO) came into force to contain the Covid-19 outbreak.

Genting Highlands, the place where the Genting group has its theme park and Malaysia’s only casino, has been shut since mid-March.

For the first month of the MCO, employees working in the theme park and casino stayed back at the highland.

However, they too started to leave after it became apparent that theme parks, entertainment centres and the casino would be among the last to reopen for business.

The ongoing Covid-19 outbreak has stalled the operations of integrated casinos and resorts in all regions, which have led to investors fleeing gaming-related listed stocks.

For once, the odds are not in favour of the house.

From Macau to the United States, casinos have had to temporarily close their operations. Genting’s operations in Malaysia and Singapore, which cumulatively contribute 90% of its earnings before interest, tax and depreciation (Ebitda), were no different. They have remained closed for the past two months or so. Worse, nobody has an inkling on the schedule of the reopening of Genting’s vast and glitzy gaming halls.

Macau, which shuttered its casinos for two weeks in February, has resumed casino operations, while Las Vegas has set June 4 to reopen its doors for patrons waiting to see the resumption of blackjack, poker, bingo and craps, among other table games.

In contrast, Genting has not given any clue as to when its operations in Malaysia and Singapore will be back in action after Covid-19 closures.

The group did not reply to StarBizweek’s query at the time of writing.

Genting, the most valuable gaming company in the region with strong cash flows, is in an unusual spot.

Its stable businesses of gaming and entertainment have come to a standstill at a time when it is undertaking three multi-billion ringgit projects.

At Genting Highlands, Genting through its subsidiary, Genting Malaysia Bhd

, is in the midst of constructing an outdoor theme park with Fox Entertainment features on a 26-acre land.

The project, mooted in 2014 at a cost of RM5bil had been delayed several times and some analysts contend that cost has gone way above the initial budget.

In Japan, Genting through SGX-listed Genting Singapore Ltd has set its sights on an integrated resort-cum-casino in Yokohama city. The budget set aside for this is up to US$10bil. Currently, the biggest project for Genting is its state-of-the-art integrated resort, casino and MICE (meetings, incentives, conferences and exhibition) centre in Las Vegas. Resort World Las Vegas (RWLV) in the Nevada gaming hub in the US has cost Genting US$2.1bil as of end-March this year. It needs to spend another US$2.2bil in the next one year to see its completion next year.

However, what’s worth noting is that the Las Vegas project is fully funded.

“Genting has committed credit lines and project financing for this, so the issue of it needing to raise further debt does not arise, ” Moody’s Investors Services vice-president and senior credit officer Jacintha Poh tells StarBizweek.

She contends that while the group’s credit metrics will be weaker with the committed spending, Genting has excellent consolidated liquidity as a buffer against its high gross leverage.

“Yes, there is a cash-burn with operations shuttered. But it has sizable cash on hand, plus a well managed debt maturity profile, ” Poh adds.

As at end-December 2019, Genting had RM30bil in cash and cash equivalents, compared with its gross balance-sheet debt of RM33bil.

However, around 64% of the group’s cash is held at three majority-owned and listed subsidiaries - around 39% at Genting Singapore, 21% at Genting Malaysia and another 3% at Genting Plantations Bhd

, therefore limiting Genting’s ability to access funds in their entirety.

Following the MCO in March, Moody’s had placed Genting’s Baa1 rating on review for a possible downgrade to reflect its expectation that earnings will decline on the back of a weaker operating performance across the group, particularly at its gaming operations in Malaysia and Singapore due to Covid-19.

At the same time, the rating captures the execution and financial risks associated with Genting’s strong appetite for expanding its gaming franchise in the US and Asia.

While such projects are large in scale and could consume operating and financial resources over the medium term, Poh

says Genting has a strong track record of execution.

“Historically, it has shown that it can prudently manage its finances and investment strategies to contain the risks associated with expansion plans, ” she says.

At the holding company level, she notes that Genting’s cash position stood at RM3.5bil as of end-December with no debt maturity until 2022.

But with the current capital spending commitments, it has limited headroom to accommodate further increases in debt until RWLV begins operations and contributes to the group’s earnings from 2021 onward, according to the rating agency.

RWLV is slated to open in the summer of 2021 – a development that will increase the group’s presence in the US and improve its earnings diversity by reducing reliance on operations in Southeast Asia.

Over at Genting Singapore, the pile of cash stood at S$3.7bil (RM11.4bil) at end-2019 and enjoys a higher rating than parent company Genting. With bidding for Yokohama to start in the third quarter of this year, Genting Singapore will have its hands full.

JP Morgan in a May 14 report loosely estimates Genting Singapore’s cash-burn at about S$1.5mil-S$1.6mil a day.

This suggests that the company theoretically has about six years of liquidity runaway to survive a zero-revenue environment, or at least a couple of years as the expansion cost of Resorts World Sentosa (RWS) of S$4.5bil is not going to be ramp-up until 2023, says JP Morgan.

According to industry players, about 60% of the cost structure of gaming companies comprise salaries to employees.

Singapore’s wage-subsidy scheme would help offset some of this fixed cost impact for Genting Singapore.

The 52.7%-owned Singapore subsidiary is also committed to paying its dividends given that parent Genting is seen to be needing more cash with the ongoing RWLV project. Yesterday, Genting Singapore said it has approved an aggregate year-end dividend of S$302mil, which equates to S$0.025 per share. Genting portion of this is S$112.25mil or RM345mil at yesterday’s exchange rate.

Genting Singapore has strong credit metrics, but the weakening credit quality of Genting could pose downside risks to the former’s rating, says Moody’s.

Genting Singapore is now the largest earnings contributor to Genting, accounting for 40% or more of the latter’s consolidated Ebitda over the last five years.

The Singapore entity also holds most of the group’s consolidated cash balance.

Business-wise, Singapore’s RWS is more dependent on the international market as compared to Malaysia with more than two-thirds of its VIP volumes coming from overseas players. This means that as long as the island’s borders remain close, revenue recovery is delayed.

JP Morgan notes that Genting Singapore seemed to have lost substantial market share going by the 38% drop in its net gaming revenue in its recent 1Q20 business review. On the other hand, the gross gaming revenue of peer Marina Bay Sands (MBS) was down 15%.

Over at Genting Malaysia, the opening of the outdoor theme park has now been pushed to end-2021 from 3Q20 that was initially planned. This is due to travel restrictions, weak demand and slow pace of works during Covid-19, the company told analysts recently.

About 70% of Genting Highlands visitors are locals. So some pent-up demand could return as soon as the partial lock-down is eased. However, this is unlikely to be sufficient, prompting a cost-cutting drive by Genting Malaysia, which reported a net loss of RM418mil in the first quarter ended March 31,2020 (1Q20).

In the first quarter, visitor arrivals to the hill-top resort were down nearly one-third year-on-year. Meanwhile, the number of foreign visitors, who mainly come from Singapore and China, was down 40%.

For Malaysia, cash-burn (including interest) from the complete shutdown in April is estimated to be about RM4mil a day, its management indicated, according to Nomura.

However, Nomura does not see solvency risk as the group has RM6.5bil cash, while net debt-to-equity stood at 25% as of end-1Q20. This, according to Nomura, assumes the pandemic is broadly under control and the new outdoor theme park opens some time by 2021.

Long road to return to normalcyWith complete shutdown in April and May and for most of June too, 2Q20 earnings of the companies under the group are likely to come in worse than 1Q20.

When they do reopen, expect visitation to ramp up slowly and capacity to be restricted as social distancing rules will have to be followed, says Nomura’s Tushar Mohata.

Going by this, Nomura sees earnings for the remainder of the year likely to be weaker, which could lead to Genting slipping into the red for FY20.

“We built-in our recent earnings cuts in Malaysia and Singapore, along with delay in capex plans and opening of the outdoor theme park in Malaysia to end-2021. As a result, we now forecast a marginal core net loss of RM29mil in FY20, ” the research firm says. Overall, Nomura finds it is still “very hard to accurately predict the earning per share trajectory given Covid-19 containment uncertainties and structural changes to the tourism theme.”

Because of this, it feels the discount to revalued net asset value for Genting will remain wider for a longer period and is unlikely to revert to its historical 30% average. At the moment, there is limited visibility as to when business can return to normalcy. “We expect a gradual pick-up in visitations with prospects coming from domestic tourism at the initial stages of Covid-19 recovery as international borders are closed. Challenges are social distancing, poor consumer confidence and general apprehension among consumers, ” Tushar tells StarBizweek.

In Macau for instance, casinos have reopened but with less than desirable results due to the significant travel restrictions set on the gambling city.

In the US, casinos are slowly but surely opening from June 4 but with all the proper precautions.

The global economy has weakened with Singapore and Malaysia entering into recession with growing unemployment.

S&P Global Ratings has cautioned that Genting’s RWLV could have a slower ramp-up because it expects Las Vegas to be one of the last gaming markets to recover in the US. “We believe RMLV’s construction is on track to open in summer 2021, but a ramp up will likely be slower than anticipated.

“We foresee structural changes that could alter the attractiveness of Las Vegas as a gaming destination in the next 24 months. Travel fears, restrictions, reduced airline capacity, and shrinking consumer pockets can put pressure on half of Las Vegas’ visitors who fly in by air. Businesses could also rethink on conventions, or prefer smaller group meetings or smaller budgets, affecting midweek demand, ” S&P said in a press release yesterday where it lowered its long-term issuer credit rating on Genting from ‘BBB+’ to ‘BBB’.

“The Covid-19 pandemic is hitting the Genting group harder and longer than we anticipated, ” it says. But the positive is that Genting has a sizeable cash to help it ride the period out. The odds are still stacked against the gaming giant given the myriad of uncertainties of how a new normal for the sector would be. When the chips do begin to pick up, investors may roll the dice on the Genting group of listed stocks, whose share prices are still substantially down year-to-date. 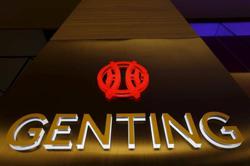