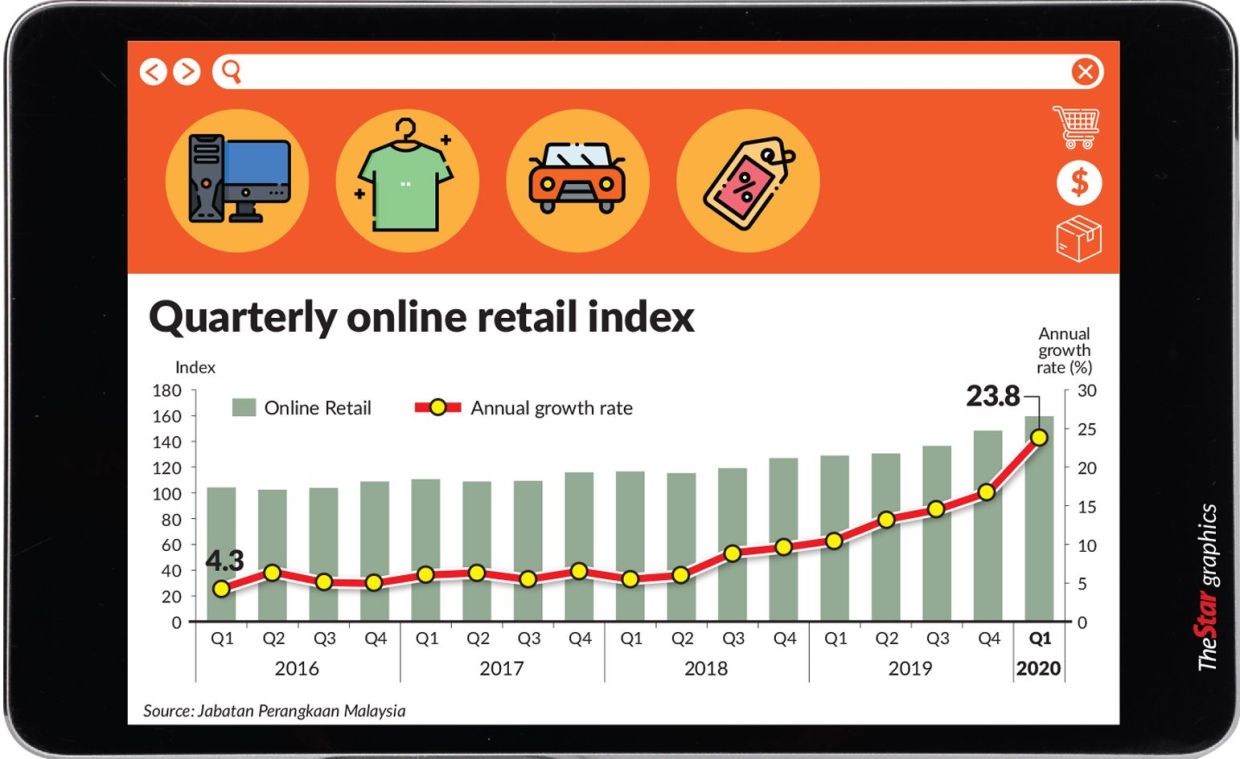 PETALING JAYA: There will be a further expansion in the online retail scene with more consumers moving towards e-commerce to purchase goods and groceries.

While Malaysia has moved towards a conditional movement control order which allows movement within states, Uzir said many were still concerned and are not leaving their homes.

“They are doing their purchasing online even for groceries, which are sent directly to their houses.

“I believe online retail will be increasing further in the near future and also in the mid-term period.

“The technological advancement today has changed the trend of buying and selling from the traditional concept to online, ” he told a virtual press conference after presenting the Wholesale and Retail Trade Census 2019. Buying frenzy: Workers sorting out parcels at the Pos Laju Kulai delivery facility. In 2018, income in e-commerce amounted to RM92bil with an annual growth of 13.8%.

Uzir pointed out that the income of RM26.1bil from online retail trade made up 5.5% of the total retail sales last year.

As for the first quarter, the index stood at around 145 points, with a growth rate of 23.8%, the highest quarterly growth rate that was recorded so far.

Meanwhile, Uzir said findings from the census also showed that out of 469,024 wholesale and retail establishments in the country, more than 70% do not own their premises and were mostly renting.“Out of that figure, 68% of them are micro-sized businesses, followed by 18% small-sized, 12% medium and 2% of the larger players.

“The government has urged private premise owners to give exemptions for the SMEs, in light of the Covid-19 pandemic, which we believe will be significantly beneficial to them, ” he said.

The census also found that the monthly gross profit for micro enterprises was below RM4,360, especially for retailers who sell carpets, textiles, clothing and footwear, games and toys, food, beverages and tobacco products, music and video recordings, other food products and fresh vegetables and fruits.

He said this showed structural changes in Malaysia’s wholesale and retail landscape, which was on par with developed countries.

Kuala Lumpur, Selangor, Melaka and Pahang were among the 11 retail-oriented states and Uzir said they had the potential to be categorised as developed states.

“To strengthen the wholesale and retail trade sector, wholesalers and retailers should implement approaches such as making retail more people-centric, exploring the potential in e-commerce, optimising new technology usage for driving productivity, exploring the retail entertainment concept and making investment in technology, ” he said.