SYDNEY: A gauge of Asian stocks pared early gains on Monday amid souring relations between China and the United States, with Hong Kong shares extending losses on mounting fears about future stability in the city.

Japan's Nikkei <.N225> jumped 1.5% after the Nikkei newspaper reported the country was considering a fresh stimulus package worth over $929 billion that will consist mostly of financial aid programmes for companies hit by the coronavirus pandemic.

Analysts expect overall trading to be subdued with U.S. and British markets shut for public holidays.

"Rising tensions between the U.S. and China around Hong Kong, trade policy and who is responsible for the 2020 economic dislocation is threatening to end the post March-trough rally," said Perpetual analyst Matthew Sherwood.

Global equity markets have surged around 30% since hitting a low in early March, driven largely by policy stimulus.

"There is a plethora of headwinds brewing to have investors question their expectations including earnings downgrades, balance sheet develeraging, the absence of a (COVID-19) vaccine and rising geopolitical tensions."

Governments across countries have also announced heavy spending to support economic growth. But optimism around economic re-openings and stimulus is fading.

Investors were rattled on Friday when China proposed imposing national security laws on Hong Kong as Beijing unveiled details of the legislation that critics see as a turning point for the former British colony.

The proposal drew the ire of Hong Kong residents who defied social distancing rules and protested on streets while the United States warned China's move could lead to U.S. sanctions.

The U.S. Commerce Department responded by adding 33 Chinese companies and other institutions to a blacklist for human rights violations and to address U.S. national security concerns.

Sino-U.S. ties have nosedived since the coronavirus outbreak, with the administrations of President Donald Trump and President Xi Jinping trading barbs over the pandemic, including accusations of cover-ups and lack of transparency.

Later in the day, investor attention will shift to Germany, where the May IFO survey is expected to show some improvement off a record-low base.

Action in currencies was a tad muted. 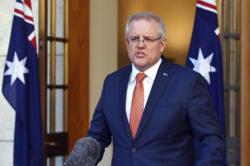