Updated look: The professional setup of Physiomobile's outlets is a far cry from their early days.

WARM smiles greet you at a Physiomobile outlet in Kota Damansara.

But the plush velvet sofa, soft lighting and bright spaces are a far cry from their shabby start in 2016.

“Our first outlet looked nothing like this. We operated from a cramped sublet unit and didn’t even display our certificates on the wall, ” shares Physiomobile co-founder Muhammad Nidzam Yatimi.

Founded by Nidzam and his fellow coursemate Muhamad Saiful Zhafri, Physiomobile has grown into a serious contender in the emerging physiotherapy space. With six centres in Johor and Selangor, the company employs about 30 physiotherapists and 15 management staff.

They have an impressive portfolio of clients including the likes of Johor Port, Perkeso and Tabung Haji.

And Nidzam will proudly tell you that they did all this without relying on any external funding.

The duo had started the company straight out of university with zero business or working experience.

Initially, Nidzam’s understanding of physiotherapy was largely limited to its role in healing sports injuries until he visited Perth in 2012. Struck by the high volume of physiotherapy clinics that offered services beyond rehabilitation and curative care, the then-foundation year student concluded that physiotherapy would be the next big healthcare trend in Malaysia, and subsequently majored in the subject.

During his practical training in the East Coast, Nidzam observed that a lack of manpower had caused patients at government hospitals to wait for months for their routine checks.

Out of compassion for their plight, he sometimes agreed to administer simple treatments for patients at their homes for free. 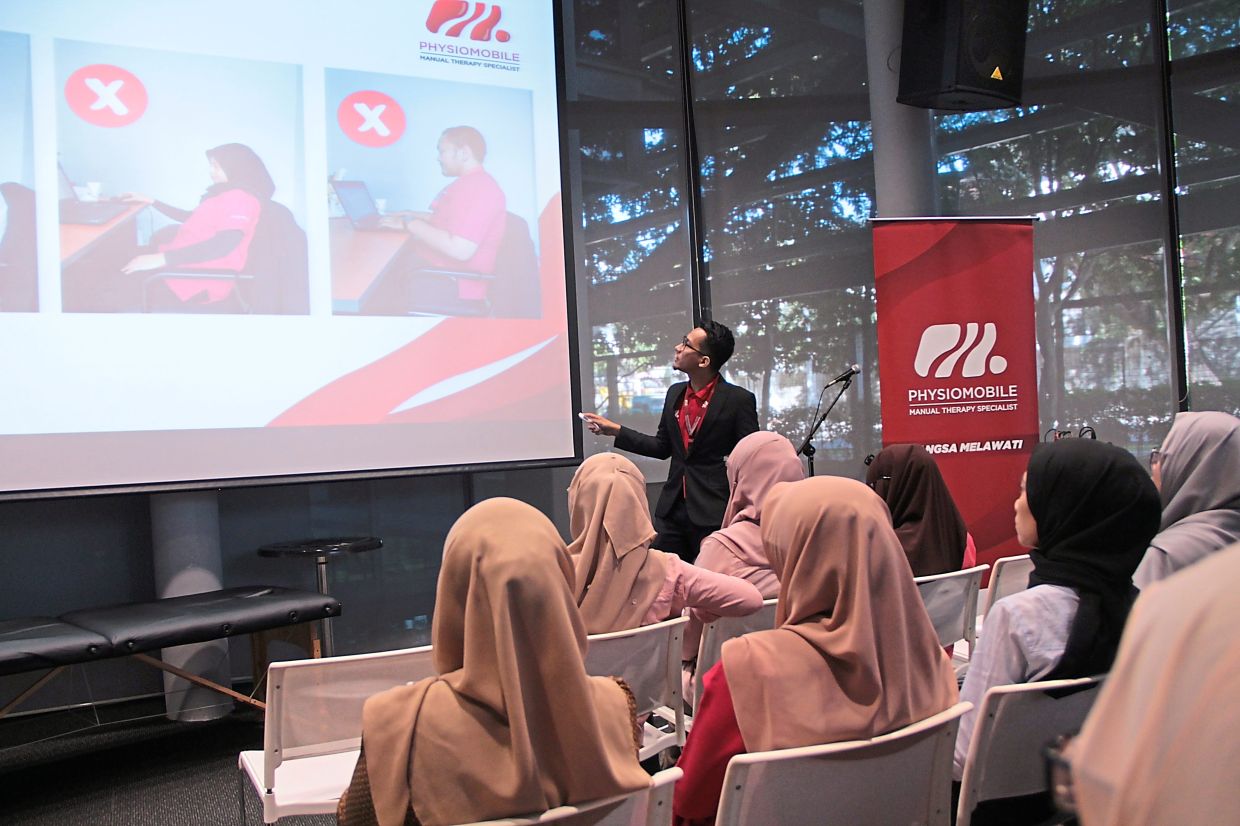 Corporate business: Corporate training on workplace health has become a core part of the company’s offerings

Most physiotherapy graduates start off by working at hospitals or centres, but Nidzam dived straight into business because of personal reasons: fatherhood.

“I married early. Several months before my graduation, my wife was due to deliver our first baby and I followed her back to her hometown in Johor Baru. As the man of the house, I was under a lot of pressure to be the breadwinner, but no hospital would hire me without my formal qualifications then, ” he shares.

He figured there may be a need in Johor Baru for physiotherapists and began plugging his services on Facebook.

“I didn’t think much about it. I was simply desperate!”

He was able to rake in RM2,000 a month, the equivalent of a graduate’s pay.

The side hustle gave Nidzam enough data to understand the market and its needs. Convinced that he was better off starting his own business instead of opting for employment, he got in touch with Saiful and the duo set up the first Physiomobile outlet in Shah Alam, Selangor. 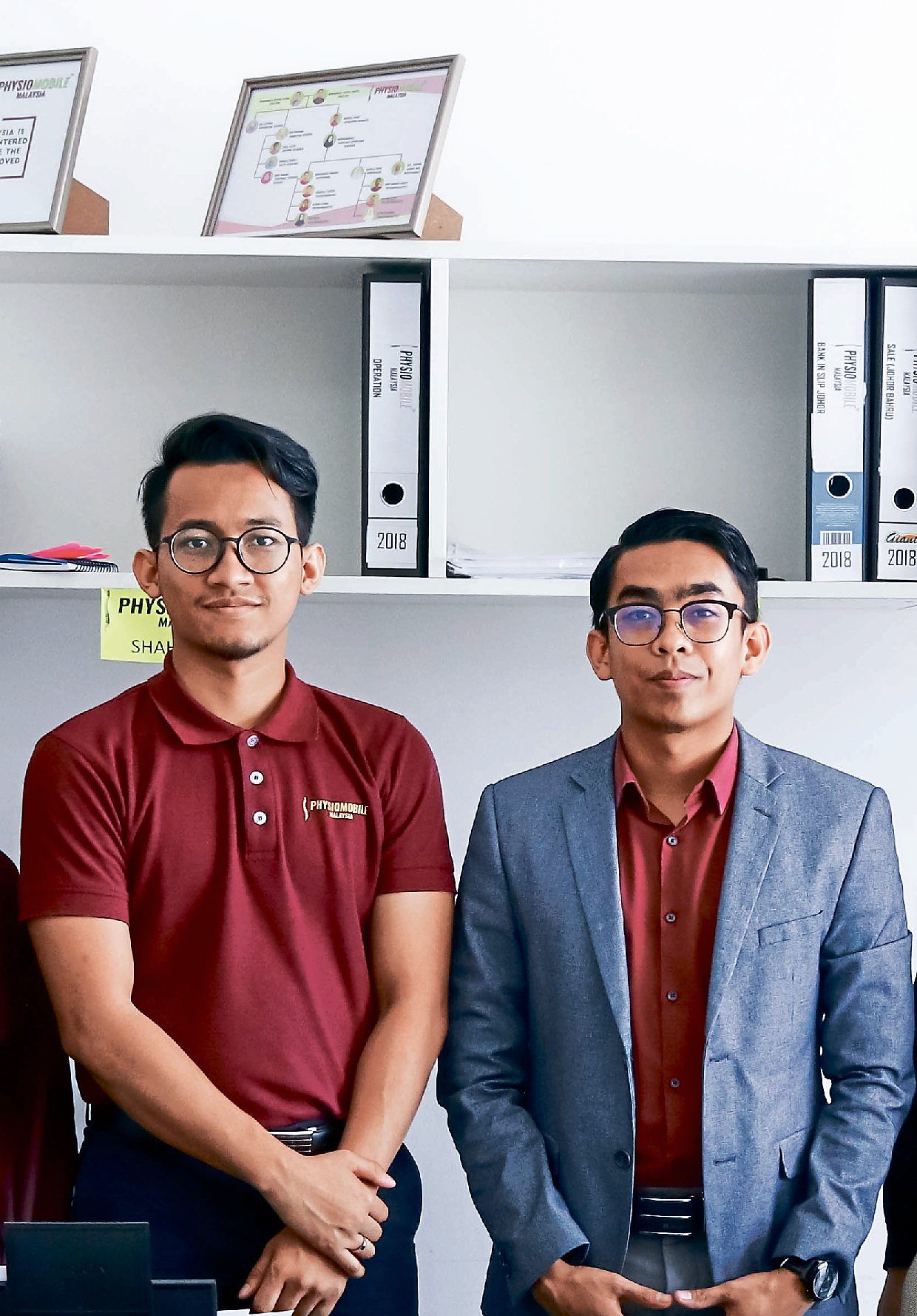 Solid foundation: Nidzam (left) and Saiful’s careful cash flow management will tide them through the MCO.

As newbies with limited capital, they focused on servicing house calls.

“Since a patient spends the bulk of their time at home, it’s important that they’re trained how to move around effectively in that space as well. When you have been injured, you would have lost usage of a percentage of your limbs and you develop a fear of walking at home, so tackling that fear is just as important, ” he says.

Given their focus on house calls, they didn’t bother to do up their outlet. Two tiny cubicles on the second floor of a shophouse would suffice, they thought.

Despite the lean operation, they grew on the back of clear care plans for their patients. Within months, they could afford to hire another two classmates.

By their personal benchmark, the company was doing well and might have continued along this modest trajectory, until one fateful incident inspired them to think bigger.

In May 2017, a distinguished-looking gentleman found his way to their outlet. But after observing Physiomobile’s barebones premises, the man made some disparaging remarks about running a serious business in a rundown place. He walked out without a second look.

That “slap in the face”, as Nidzam calls it, prompted the founders to look into some plans they’d never really considered much before.

They knew their current location was limiting their prospects.

“Some customers had been complaining. They are already in pain, how are they going to climb up to the second floor?”

After evaluating their financial situation, the founders decided that they had a strong enough cash flow and sufficient repeatable business to justify an expansion.

Using a combination of retained profits and family funds, they moved into a bigger ground-level shoplot at a high-traffic area in Shah Alam. The setup cost about RM70,000 while monthly rental shot up to RM4,500 – a huge jump from just RM700 a month previously.

“It was the scariest decision we’d ever made, ” Nidzam confesses. “Saiful and I were already mentally prepared to tighten our belts and go without our own salaries if necessary.”

Fortunately, it never came to that.

Being located on the ground level turned out to make a huge difference in attracting walk-ins.

The founders implemented new targets and a bunch of incentives to drive performance. They also tripled their spend on social media marketing to generate interest from other parts of Malaysia.

“We had patients travelling from as far as Penang, Johor and Perak, and some of them came by ETS train, ” says Nidzam.

In 2017, they scored a lucky break. After coming across their details on www.whatclinic.com, an online directory for medical services, Johor Port invited Physiomobile to help them address a pain point: its yearly medical budget had burst because of excessive injury claims.

Nidzam and Saiful saw an opportunity to create a paradigm shift.

“The old thinking was that workplace injuries are simply a cost of doing business and that doing the best for your employees equates to simply managing their injuries. What if instead of simply managing them, employers had a way to prevent them?” asks Nidzam.

This opened the door to a new business segment. Corporate training became a core part of the company’s offerings. Physiomobile has since conducted training on occupational health and hazards and been engaged in Perkeso’s Return to Work panelists.

In Malaysia, there is a fragmented but growing industry of small physical therapy clinics and a few large chains. Demand is growing due to an ageing population, ongoing sports injuries and growing awareness on the cost savings and effectiveness of outpatient rehabilitation.

“We foresee that the corporate space will be our biggest marketplace as employers begin to see how preventative physiotherapy can help them save money and improve productivity, ” says Nidzam.

While Physiomobile considers itself a small player in the market, it already has big plans.

“The idea came about as a result of a request by our long time customers, who had been following our journey and were keen to be part of our business.”

This will also provide the company with a new source of income. In the longer term, the programme will help Physiomobile to expand faster into other territories. Out of the four new outlets last year, two were operated by licensees.

For now, though, some of its expansion plans have been put on hold due to the Covid-19 pandemic.

“We were targeting to open 10 new outlets this year, but this plan will have to be put on hold. With the movement control order (MCO) coming into effect, our revenue has dropped more than 50%.

“However, as we practise a one-year cash flow planning for expansion and working capital, that cash flow will help us get through this difficult period. So there is no pay cut, unpaid leave or retrenchment of staff, ” he says.

Operation during the MCO is limited to selective patients with critical conditions such as stroke and post-operative cases. But strict safety measures are observed during this period including checking the patient’s health condition and performing detailed screening of the patient before accepting their booking for treatment.

The company also introduced new services such as online training, online live sharing and one-on-one tele-consultations to ensure that patients receive proper advice during this period.

Nidzam says they will also be applying for the various government initiatives in support of SMEs to better prepare for the future.

Physiomobile’s next mission is to penetrate into the multinational corporations and international hotel chain markets.

“In the past, we were invited to give awareness talks but we didn’t manage to convert those opportunities into sales, ” Nidzam shares.

This was an area for improvement and Nidzam and Saiful felt the solution was to hire a chief executive officer with the right skills and corporate experience to drive the company’s growth in a professional manner. They found their candidate last year.

“We can’t be good at everything. We started our business straight out of university, so we don’t have corporate experience. To grow, we need to leverage on other people’s expertise. That way, we can focus on what we do best, which is innovating, and be a true disruptor in this business, ” says Nidzam.