WITH global economy looking certain to enter into recession, perhaps as early as the second quarter (Q2) of this year, investors are left wondering where to put their money to generate income as practically all asset classes are going through a risk-off cycle.

Driven by fear, mainly due to the single unknown factor – the impact of Covid-19 on all of us, whether economically, financially, and even our social lives, markets have not only tumbled but they are now into deep bear territory.

The funny thing about asset prices is where cyclical stocks get impacted by events or by economic data, which is expected, but even the widely known defensive names are not spared as fund managers tend to offload not only losing mark-to-market positions but even winning ones as they are up against redemptions and managing liquidity risk at the same time. In worse cases, especially in extreme market movements, the volatility of prices is also driven by margin calls, an illiquid market and fear.

Amid the chaos, there are also opportunities as weak market prices are sometimes a chance of a lifetime to buy stocks that you would never dream of getting at such bargain prices. Ask anyone who had witnessed the bottom of the FBM KLCI when the 100-stock index then hit 262 points in 1998 or when the market also hit another temporary bottom in October 2008 following the global financial crisis, at just above 800 points.

Have we seen the bottom? Nobody has the answer to that as it all depends on how bad it would get as we are facing an unknown factor – the impact of Covid-19 on governments, on economies, on jobs, on income, on financial markets and so forth. Granted that 1Q earnings will be a wash-out, 2Q earnings too are at risk now and we could be lucky if we could reach earnings normality by 3Q of the year.

Given the clouded outlook, one of the defensive ways in managing an equity portfolio is to look at real estate investment trust (REIT) instruments as their business model is rather straight forward, driven mainly by rental income while profit is a function of cost controls. The biggest challenge for REITs is managing or maintaining a high occupancy rates for their properties.

As economic condition worsens, there is a likelihood that some of these tenants who are occupants of the prized assets may either default or simply close shop, resulting in a loss of income or time-delay in getting a replacement tenant for the REITs. There are also pressure coming from tenants for landlords to provide rental rebates or all together discount on rental rates during these trying times as tenants try to mitigate their own cost due to fall in business revenues.

For now, we can’t deduce the impact of Covid-19 on REITs sector because any assumption can be said to be purely speculative. It is also not right to assume that a particular REITs could see 10% or 20% reduction in their revenue due to tenants’ request for rebates or due to tenants simply terminating their lease due to poor business conditions. Hence, the only guide we can assume is to see which REITs really stands out, in terms of revenue growth, realised net profit income and higher dividends. In this way, we know for a fact that the REITs are doing what it takes to enhance returns to unitholders and at the same time their business model is resilient.

First, let us look at the big picture. The Bursa Malaysia REITs Index (RI) was last seen at 780.16 points. Measured against the FBM KLCI, which is down 23.2% year-to-date, the RI is down 19%. Hence, the RI has remained an outperformer, perhaps driven by its defensive nature. Interestingly, all of RI’s significant decline occurred in the past six trading days alone as the index fell from 962 points to 780 points, in what appears to be a major sell-off for the sector. 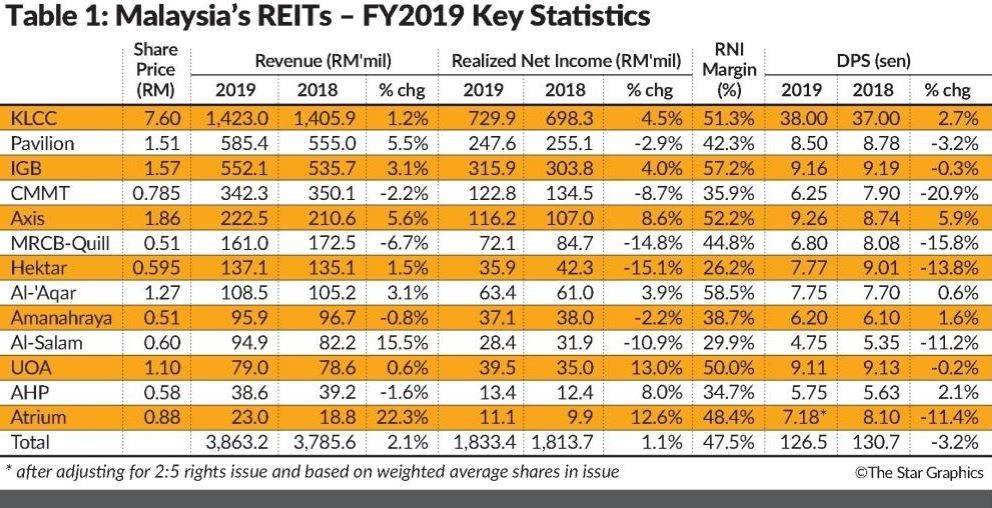 From the Table 1, we can see that nine REITs recorded higher revenue on a year-to-year basis but in terms of realized net income, only seven companies showed growth. In terms of dividends per share, only five companies gave higher returns to their unitholders while eight others saw a drop of 0.2% to as high as 21% fall in dividends. From the above table, we could also observe that there are only three REITs that exhibited growth in all three segments, i.e., revenue, realised net income and dividends. The three REITs are KLCC, Axis and Al-Aqar Healthcare.

Interestingly, Amanahraya and AHP, although showing contraction in revenue or realised net income or both, gave higher dividends to their unitholders on a y-o-y basis.

REITs that experienced a contraction in topline are typically faced with challenging market conditions, either in the retail or office segment or both, which is of course depending if they are exposed to the sectors, while REITs that experienced lower realized net income, basically are showing signs that cost containment for them is not easy. The above table also summarizes the current realized net income as a percentage of revenue and we can see that on average, REITs have very strong margins of almost 48%. Al-’Aqar Healthcare at 58.5% is a big winner here while others with more than 50% margin include IGB (57.2%); Axis (52.2%); KLCC (51.3%); and UOA at 50%.

We also see some REITs having very poor margins and the bottom of this is Hektar at just 26.2%, followed by Al-Salam (29.9%); AHP (34.7%); and CMMT at 35.9%. The margins enjoyed by these REITs will come under further pressure if the rental market for their properties gets worse during this economic turmoil. This in turn will impact their ability to pay dividends as well as their valuations. On valuation perspective, we cannot run away from valuing REITs away from using the dividend yield approach and price to book measurement. Table 2 summarises the 13 REITs mentioned above, ranked in terms of highest historical dividend yield based on total pay-out in 2019. Based on Thursday’s closing prices, the sector as a whole (i.e. for REITs that have announced their full year results) is trading at a yield of 5.83% (with range of between 5% and 13.3%) and at a price-to-book ratio of 1.02x (with a range of between 0.39x to as high as 1.47x)

Table 2 also shows that larger established REITs with large investors’ following and proven track record in terms of dividends, growth in revenue and realized net income tend to show lower yield while REITs that have exhibited contracting topline growth or lower dividends tend to trade at higher yield and at the same time lower price-to-book measurements. With the 10-year Malaysian Government papers trading at a 3.54% (which is up about 79bps from its recent low of 2.75%), driven by global sell-off in sovereign papers, the above REITs are giving excess yield of between 144bps and 979bps higher.

The question for investors is whether the current yields for some of these high yielding REITs is sustainable or otherwise, given the economic headwinds we are now faced with. Even last financial year we saw some of these REITs had weaker financial performance, they would likely be hard pressed to sustain their 2019 realized net income and dividends. Hence, the higher yield is actually a reflection of risk on some of these REITs.

Nevertheless, investors can take comfort that based on current market prices, these REITs looks relatively attractive even if the realised net income declines by about 20-30% this year. This is more so for REITs that are trading at 8% and above in yield today. Hence, even if distributable dividends were to decline, the lower dividend pay-outs are still relatively attractive vis-à-vis the conventional fixed deposit rate or even the 10-year benchmark MGS papers. Another important element to observe among REITs is the quality of assets. Have the fair value of their prized properties appreciated in value the past year and whether the trend is positive over the past 1-2 years. Table 3 provides some light into REITs this. An almost similar trend is shown. REITs that are exhibiting strength in their topline growth and sustained dividend paying ability tend to have assets that are appreciating over time. Both KLCC and Axis Reits

stand out with strong fair value gains in their investment properties. In Pavilion REITs’ case, although their landmark property, the Pavilion Malls saw an increase of RM100mil y-o-y, the total amount was reduced by RM90mil in their other property, DA MEN Mall. Other REITs had marginal change in fair values but two others experienced a relative weakness in the value of their investment properties. This was seen in CMMT and MRCB-Quill, whereby their respective properties had a reduction in fair value by about RM30.7mil and RM36.7mil respectively.

, which is in March.

Table 4 summarized performance of these five REITs as at end of Dec-2019.

These five REITs, once measured on an annualized basis are currently trading at weighted average annualized yield of 7.3% and price-to-book of 0.73x. The annualized yields are not indicative of what these REITs may announced by their respective year-ends as there are no certainties that their business model or realized net income will be sustained for the remaining quarters or otherwise. Nevertheless, similar to Table 1, we could see that YTL and KIP stands out as they are trading presently at an annualized yield of about 10% each. Even 20-30% deterioration in realized net income, the potential yield of 7-8% is attractive and more than double of the risk free rate of 3.54%.

Having analysed the data above, there is another interesting table to talk about and that is the performance to-date of all the REITs. In Table 5, we can see some REITs are much more resilient than others while some are still giving investors positive returns despite market’s uncertainty. 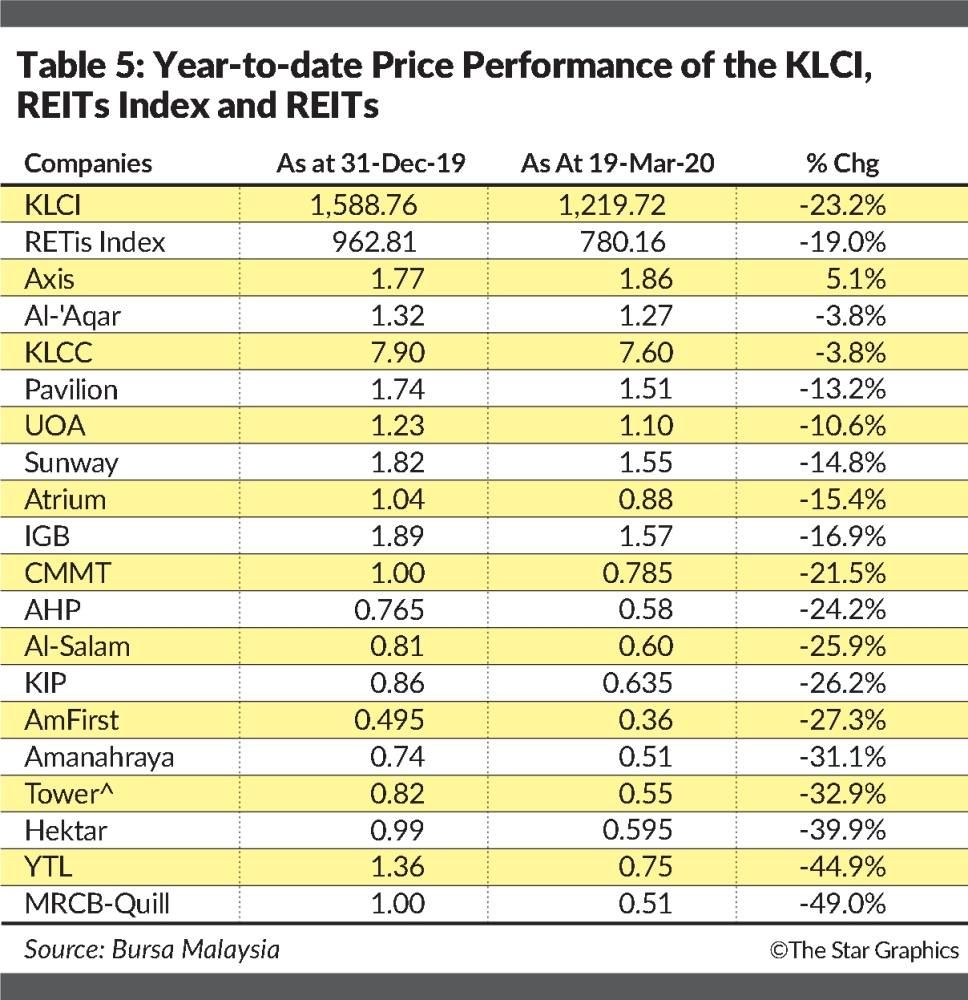 Table 5 basically summarizes who all the listed REITs have performed year-to-date and clearly a few of them have even underperformed the KLCI with declines of between 24% and 49%.

From the above analysis, it is interesting to see how market will view the REITs sector going forward. Unlike property stocks, where there can be a value trap due to deep discount to net asset value, all REITs’ business model is dependent on lock-in rental agreements with their respective tenants, either directly managed or via master lease agreements with the building operators.

The recent sell-off in the sector, deep values and high dividend yields provides an opportunity for investors to accumulate these long-term assets that can be owned indirectly via the REITs at a relatively attractive entry levels, both in terms of potential capital appreciation and dividend income. With significant price correction in just last six trading days, it is perhaps time to go offensive on REITs.