The rating agency said on Friday the PH coalition has notably improved fiscal transparency and moved to tackle corruption scandals, such as 1MDB.

The rating agency said on Friday the PH coalition has notably improved fiscal transparency and moved to tackle corruption scandals, such as 1MDB.

Fitch said the PH has been making progress in addressing uncertainties that surfaced after the 2018 election about the medium-term outlook.

It pointed out the government has faced a difficult task since taking office to reassure investors of policy continuity amid persistent concerns about political stability, fiscal consolidation and the outlook for economic growth.

In a video interview with Fitch Ratings just released, Finance Minister Lim Guan Eng emphasised the government's commitment to fiscal consolidation over the medium term in light of Malaysia's relatively high public debt at 65% of GDP.

In its 2020 budget announced last October, the government set a deficit target of 3.2% (from our expected outturn of 3.4% in 2019), which the minister stressed balances the need to support growth against the need to narrow the deficit over time.

Lim had also emphasised that last year's special dividend from Petronas was a one-off.

The PH administration's first budget in November 2018 raised investor concerns about the fiscal outlook, following the repeal of Malaysia's goods and services tax (GST), although these were balanced by expectations of improved fiscal transparency and governance.

The government replaced the GST with a sales and services tax, which partly offset the revenue loss, and has sought to reassure investors that it remains committed to fiscal consolidation.

“However, this commitment could be tested if revenues underperform or if Malaysia's economy were hit by new economic shocks, such as the outbreak of the Wuhan coronavirus. There are also risks associated with Malaysia's high property prices and household debt.

“The government's fiscal projections could be challenged if oil prices were to fall below its expectations.

“Fitch believes the loss of revenues from the GST makes the budget more reliant on oil proceeds. Nevertheless, the government's oil price forecast in the 2020 budget is not unduly optimistic, at US$62 per barrel, and aligns closely with our own forecast in the December Global Economic Outlook of US$62.50 this year, ” it said. 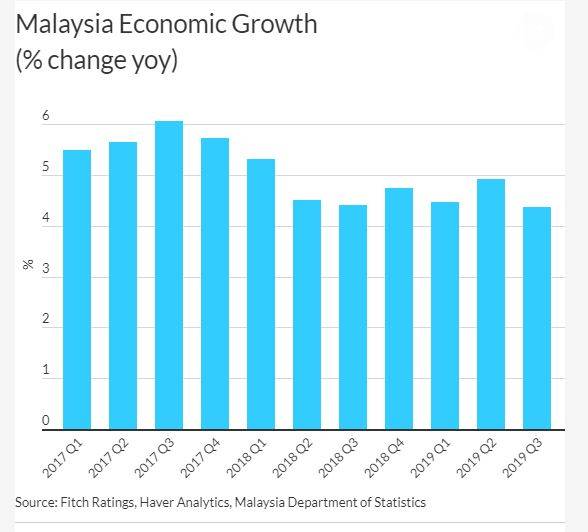 Fitch highlighted that another source of potential unease for investors, which the minister sought to allay in the interview, is the risk of near-term political volatility.

The PH coalition has an agreement that Prime Minister Tun Dr Mahathir Mohamad will hand over power to Datuk Seri Anwar Ibrahim, head of the Parti Keadilan Rakyat.

Although the agreement reportedly stipulated that this transition would take place within two years of the PH taking power, no formal date has been set for it.

“The perception of the PH administration among foreign investors is particularly significant for Malaysia as foreign-investor holdings of domestic government bonds amount to around 20% of the total, albeit down from a high of 33% in 2016 and less than Indonesia's 39%.

The rating agency said Malaysia has potential to benefit from the ongoing relocation of export-oriented manufacturing from China.

So far Malaysia's exports, which are diversified across commodities and manufactured goods, have held up reasonably well, and GDP growth is estimated by Fitch at 4.5% in 2019 and 4.3% in 2020.

Fitch said in its interview, Lim noted that the government believes Malaysia's economic performance in 2020 will be better than in 2019.