The making of RM1 trillion fund

Good dividends: The EPF, with 7.1 million active members, generally gives a dividend which is much higher than what the risk-free bank deposit rates offer. — Reuters

IN less than 18 months, the Employees Provident Fund (EPF) is projected to have assets under its management to the tune of RM1 trillion.

It is more than 50% of Malaysia’s gross domestic product and about 70% of the market capitalisation of Bursa Malaysia and three times the size of Permodalan Nasional Bhd’s assets under management.

The EPF, with 7.1 million active members, generally gives a dividend which is much higher than what the risk-free bank deposit rates offer.

In the last 10 years since the 2008 financial crisis, EPF’s dividend rate has not been less than 5.65%. Contributors are not used to getting anything less than that even though interest rates were at ultra low levels.

The ultra low interest rates environment was bad for pension and provident funds such as the EPF because 50% of its funds are with fixed income instruments.

After momentarily raising rates in 2016 and 2017, the US Federal Reserve signalled the end of its monetary tightening policy.

Since July this year, the Federal Reserve revised downwards its interest rates three times to between 1.5% and 1.75%. The rates are not likely to go up next year, meaning the era of low interest rates will continue.

Following that, many central banks worldwide started cutting interest rates, including those in Indonesia, Mexico, Thailand and Malaysia to shore up their economies. 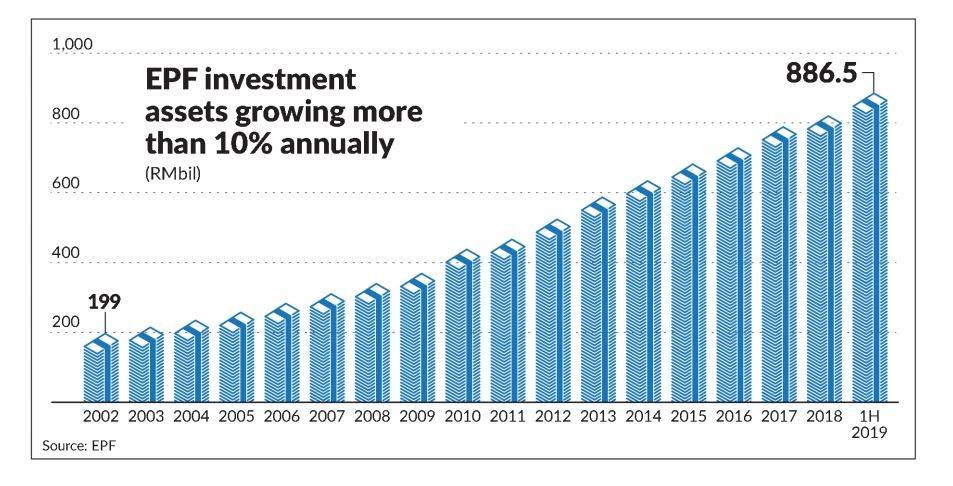 Investing in an ultra-low interest rate environment is tough for a fund such as the EPF, which is why it needs to put more money outside the country.

“The size is not a problem. It needs to diversify its investments such as being able to put more money outside the country if there are opportunities, ” says Nasir in an interview recently.

A seasoned hand in helping manage the funds in the EPF, Nasir understands the challenges of putting money outside the country.

From selecting the right types of asset mix to managing the political and and foreign exchange risk, Nasir has been in the thick of things when the EPF wanted to invest outside the country.

“The EPF had looked into its first overseas foray back in 1994, but before we make the move, the country was hit with the Asian Financial Crisis and the idea was shelved.

“It was only in 2004, after Tan Sri Nor Mohamed Yakcop had become the Second Finance Minister, that we revisited the diversification concept, ” he tells StarBizWeek in an interview.

Today, the EPF has invested in 40 countries globally with Latin America as its latest edition.

The provident fund is selective where it puts its money outside Malaysia.

“We don’t put money in Africa because of the political risk. In Latin America, we have invested in four countries including Mexico, ” says Nasir who was a pioneer in the research department of the EPF.

As for forex risk, Nasir says that by putting money in 40 countries is already some form of hedging the risk from exchange rate changes.

Apart from diversifying its money overseas, the EPF also has its own team to handle the forex risk hedging that is deployed for its fixed income investments, which makes up for 50% of its portfolio.

“Movements in forex can cause big gains or losses in fixed income instruments. That is why we have a strong team looking at forex risk, ” says Nasir.

Moreover, EPF’s return from its overseas markets has far outweighed the gains from its domestic investments even though the overseas portfolio only makes up less than 30% of its total assets under management.

Its investments stretched from properties in countries such as Poland to an airport outside London.

“One of the best real estate investments is our property in Poland. Through our relationship with private equity firms, we were given an opportunity of a direct 5% stake in Gatwick Airport, ” says Nasir.

“The size of the fund allows us to explore opportunities overseas that is not easily available, ” says Nasir.

The downside to dealing with large private equity funds such as the KKR and Bain & Co is a commitment to continuously explore opportunities that the funds bring. This element of commitment is something that could hamper the operations of a fund such as the EPF because it would need to get approvals before being allowed to take money outside the country.

For instance, three years ago after the 1Malaysia Development Bhd (1MDB) fiasco came to light which coincided with the ringgit coming under pressure, Bank Negara had imposed strict conditions for funds to take money out of Malaysia.

This was one of the measures the central bank had taken to help shore up the ringgit. The EPF’s overseas investment, which made about 30% of its total assets, has helped the fund to enhance its returns to contributors.

Since 2014, Bursa Malaysia closed lower every year except for 2017.

The average Malaysian fund returned only a measly 2% to its investors while EPF has been giving out more than 5.6%.

In 2018, the EPF recorded RM50.88bil in gross investment income, of which 40% of the income is generated from its overseas investment.

The fund announced 6.15% dividend to its members, which was a good return considering the the local market index FBM KLCI fell below 6% and the local economy grew at 5.5% last year.

One of the biggest issues that the EPF faces is liquidity in local investments.

Although there are more than 1,000 companies listed on the exchange, only 200 stocks meet EPF’s investment criteria. The provident fund has to ensure it does not hold too many shares in a particular company or it could get caught up by related party rules.

For instance in the proposed merger of CIMB Bank, RHB Bank and MBSB, the EPF was not allowed to vote because of its substantial interest in all three financial institutions. Sometimes when a company calls for a rights issue, the EPF is not allowed to pick up its portion unless the shareholders approve.

Nasir recalls the EPF being put at a disadvantage because of too high a holding in certain stocks.

A fund manager says that generally when the EPF starts selling a particular stock on Bursa Malaysia, other investors would stay out of the counter. Hence, the EPF would be stuck with the particular stock and sometimes takes years to clear its position.

“There are some good companies where the EPF would want to put its money. But the problem is liquidity of the stock, ” says Nasir.

The Malaysian economic performance peaked in the early 1980s through the mid-1990s, as the economy experienced sustained rapid growth averaging almost 8% annually.

The EPF was dishing out a handsome dividend of 7.5% to 8.5% annually to its members during that period, churning its return mainly from yield from the local bond market and equities investment.

At that time, Malaysia’s equity market was on a rapid growth as state-owned enterprises such as TELEKOM MALAYSIA BHD

In the 1990s, average interest rates were between 8% and 10%, causing handsome returns from Malaysia Government Securities (MGS).

“Those days, the EPF had more than 70% of the money in government fixed income instruments. It was a no brainer, ” says Nasir.

Then, the EPF could afford dividends of 8% easily.

Since 1999, interest rates have been trending down. In addition, the performance of the stock market has been inconsistent.

Churning 6% return would have been impossible for the EPF should the fund retain its investment in Malaysia.

Nasir points out that when the Asian Financial Crisis hit Malaysia in 1997, the EPF’s assets fell below its liabilities for a short period.

According to Nasir, although Malaysia had recovered quite fast from the crisis, the event was a “wake-up” call for the EPF to diversify its investment to overseas market.

“The rationale is simple, we shouldn’t put all our money into one basket. Diversification is key in managing risk, ” he says.

He acknowledges that getting the ball rolling for EPF to venture overseas was a painfully long process from getting the consultants to finding custodian to asset allocation.

Referring to the Canada Pension Funds as an example, Nasir points out that almost 90% of the funds are invested abroad, and the remaining 10% locally.

The Canadian Pension Funds is one of the largest in the world having more than US$400bil assets under management and owns assets across 52 countries globally.

Nasir says for EPF to sustain its growth especially at its behemoth asset size, it needs to increase its overseas investment in the future.

“By investing overseas, it does not mean the fund will reduce its investment size in Malaysia. The EPF has about RM600bil invested in the country. But due to the sheer size of the EPF as a fund, it would need to increase its investment overseas, ” says Nasir.

Since central banks in developed markets such as in the United States, Europe and Japan have been persistent on keeping interest rates extremely low, the competition for yield has become more intense, especially among the pension funds.

This has made it more challenging for the EPF, going forward.

Nasir feels that the market situation would continue to be challenging next year on the back of low interest rates globally, the US-China trade war as well as many funds chasing yields.

“There is so much money out there and everyone is chasing yields, which has put pressure on returns, ” he says.