Increase in excise duty for alcohol seen unlikely in Budget 2020

On year-to-date, shares in both listed breweries on Bursa Malaysia, namely, Carlsberg and Heineken Malaysia Bhd had done very well raising more than 32% and 21% respectively to RM25.14 and RM24.10.

PETALING JAYA: Cheers to brewery companies as the government is unlikely to increase the excise duty for alcohol in the upcoming Budget 2020 announcement next month, according to CGS-CIMB Research.

In a report yesterday, the research house said a hike in excise duty for beers was unlikely to happen as Malaysia has the second highest excise duty on beer in the world.

“Malaysia ties with Singapore for the second highest excise duty levied on alcohol in the world after Norway.

“This is despite the large disparity in income per capita between Malaysia and these two countries.

“Hence, any further increase in excise duty will have a negative impact on tax revenue from the beer industry as malt liquor market (MLM) volumes will be dampened by unaffordable beer prices, ” CGS-CIMB said.

It pointed out that expectation was based on plans to attract more tourists into the country under the Visit Malaysia 2020 campaign, weak consumer sentiment and potential loss of tax revenue due to lower sales volume if duties were hiked.

In terms of sales, CGS-CIMB expected the annual beer sales to continue to grow by mid-single digits driven by new product launches including non-alcoholic drinks to tap into a bigger customer based.

Sporting events such as the World Cup and Olympics 2020 would help to boost sales, it added.

was its top pick due to higher dividend yields and cheaper valuations.

Overall, it is “overweight” on the brewery sector due to the dividend yield.

“We believe that the inelastic demand for beers should support the sector’s earnings and valuations, with attractive FY19-21F dividend yields of 3.9-4.7% offering investors a safe haven in a volatile market, ” it said.

CGS-CIMB said that a hike in any excise hike for alcohol products (inclusive of beer) would lead to higher consumer demand for illicit beers.

“This will be detrimental to the strong ongoing efforts by the government to clamp down on the easy availability of contraband alcohol products.

On year-to-date, shares in both listed breweries on Bursa Malaysia, namely, Carlsberg and HEINEKEN MALAYSIA BHD

This was in comparison to the broader market performance that saw the benchmark index FBM KLCI declined almost 5.6% year-to-date. 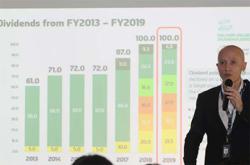