A LOT has changed in the 40 years since the day Agromate Holdings Sdn Bhd (AHSB) chairman and founder Raymond Tang started the integrated fertiliser manufacturer and distributor business.

One example are the highways that criss-cross Peninsular Malaysia today. When Raymond started the business in 1979, the North-South Expressway and the East Coast Expressway were not built yet. Also, information was not always readily obtainable unlike now with the advances in communications technology.

Back then, AHSB’s main subsidiary Agromate (M) Sdn Bhd (AMSB), which supplies fertiliser to large plantations, had just a small team to cover the entire country. Due to the remoteness of plantations and the lack of infrastructure such as roads and telecommunications, fertiliser suppliers needed to rely on dealers who had direct access to the plantations and farmers. 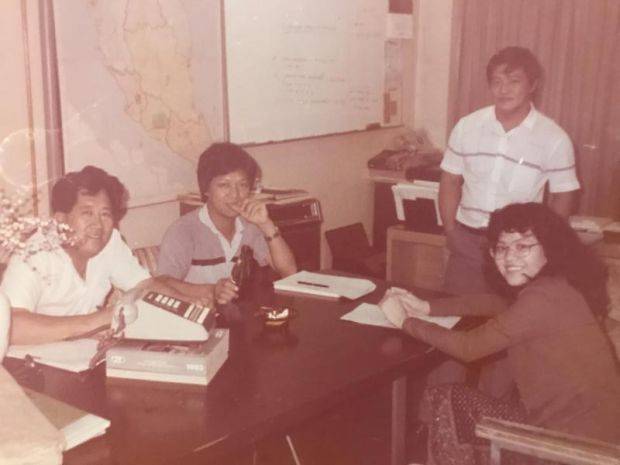 A young Raymond Tang (standing) with his staff at the first Agromate office, at Shaw Parade in downtown Kuala Lumpur.

Strong relationships were forged with these dealers by Raymond, who managed to secure capital investment by a few major dealers in AMSB when it was first established.

“Dealers were the intermediaries in those days, and we relied on them for market information as they were close to the estates and farmers, ” says AHSB chief executive officer Edward, Raymond’s eldest son.

Today, just as the Malaysian landscape has changed and infrastructure become more developed, the market for fertiliser and how it is distributed has also progressed. Plantation firms buy fertiliser through a central procurement system now and distributors like AMSB bid for these tenders to supply the fertiliser.

“With our knowledge and business know-how from experiences gained in Malaysia, we expanded our business by developing and penetrating the overseas market, initially among neighbouring countries, namely Thailand, Indonesia, Myanmar and the Philippines, then to Taiwan, China, Papua New Guinea, Sri Lanka, Africa and beyond, ” says Edward about Agromate’s expansion plans. 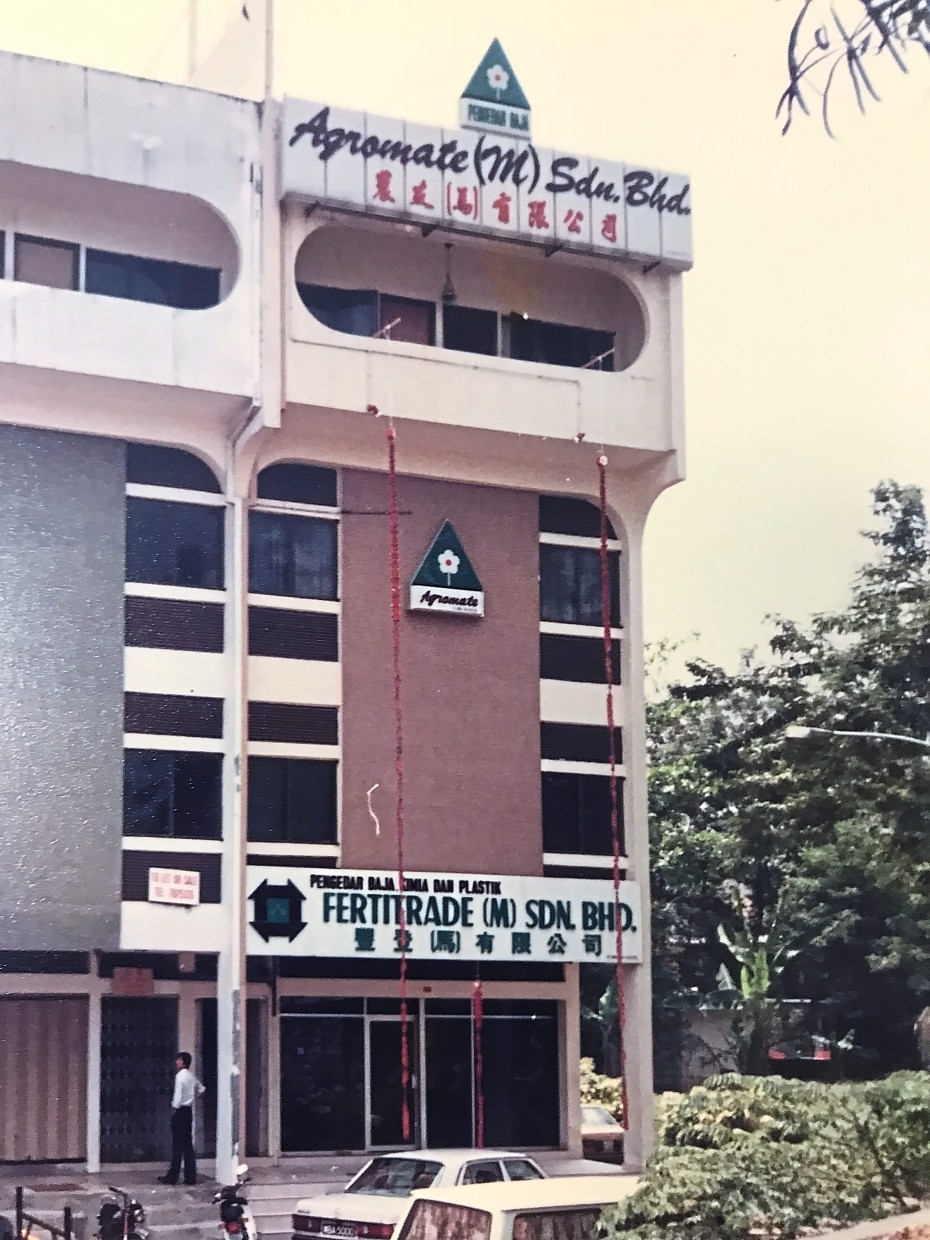 “We formed joint ventures and smart partnerships with renowned international companies to create synergy and open doors for business ventures in new markets to further strengthen our global presence. We will continue to expand into regional businesses by forming alliances with local partners and exploring new related businesses.

“We treat clients as our partners, and we extended and applied our family-oriented culture to provide full support and work with them closely for the long term. We provide advisory service and introduce new agricultural practices and fertilisation methods to enhance their yield.

“Our efficient supply chain management is backed by a strong relationship with reliable suppliers for competitive sources. This was earned through trust and credibility built through long-term good working relationships. Agency was given to AMSB not only for Malaysia but also in other South-East Asian countries.

“We have a dedicated team handling procurement, shipping, logistics, marketing and sales support, as well as comprehensive infrastructures which enable well-organised upstream and downstream operations that efficiently cater to the entire supply chain – from the point of production to delivery to customers, ” he says.

Given the changing business environment and the market becoming more competitive, Edward formed the brand Ag-tech to further differentiate the company’s offerings compared to its competitors. 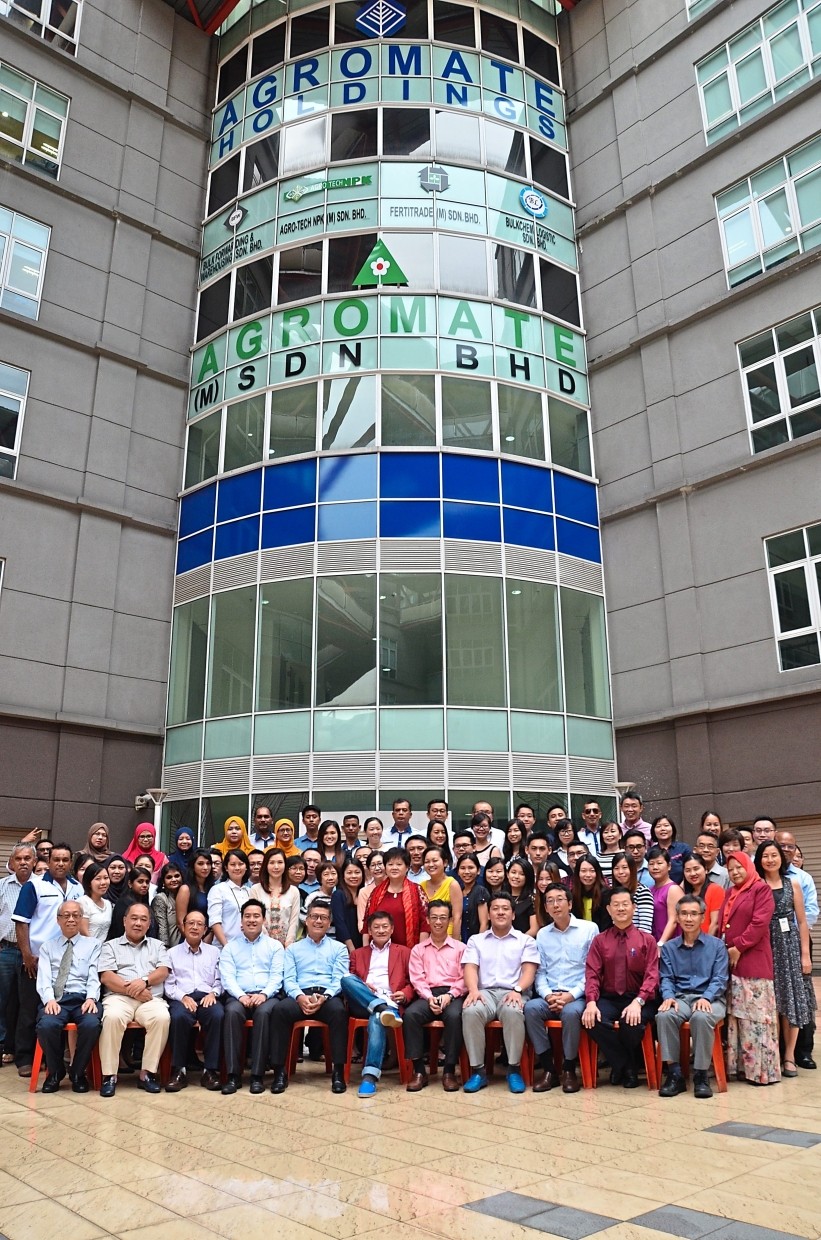 Milestone: The management and staff of Agromate in a group photo at their current office in Kota Damansara, Selangor, to mark the company’s 40th anniversary.

The idea behind Ag-tech came about as Edward believed that the group needed a brand distinguished for its quality when the collaboration with Oslo-based Norsk Hydro ASA’s agriculture arm, Yara International ASA, ended in the mid-2000s following a restructuring. Norsk Hydro had at one time owned up to 49% of AHSB, which was then known as Hydro Agromate Holdings Sdn Bhd from 1999 to 2006.

The Ag-tech brand is actually a super-brand with a number of other brands that come under it, for example Agro Activa, Agro Vita, Super Nitro Potash, Super Ferti and Royal Terra. These brands are not only sold in Malaysia but overseas as well and are much sought-after.

Besides the brands that come under the Ag-tech super-brand, the group also has other house brands, namely Cap Segi Tiga, Golden Palm, Agro Blend and Agro Mix. These products comprise imported straight fertilisers as well as mixtures, blends or compacted fertilisers that are locally produced but using imported raw materials.

AMSB distributes these brands to the local market, while other subsidiaries within the group cover the overseas markets. As a percentage, around two-thirds of group sales come from Malaysia and the rest from overseas.

“Agromate has taken a prudent approach towards risk management and hence we have never defaulted a single payment to our suppliers or banks for the past 40 years. As a major importer of fertiliser, cash flow management is a key integral part of the business, especially in interest rates and foreign currency exposures, ” says Edward.

In the early days, the ever-prudent Raymond avoided much of the volatility by not being greedy.

“This was a good practice taught to him by another trader, who told him that the first loss is always the cheapest loss, ” says Edward.

Along the way, as sales rose, the entrepreneurial Raymond acquired Fertitrade (M) Sdn Bhd (FMSB), which was founded in 1981 by several individuals who saw an opportunity in the niche fertiliser market supplying to oil palm smallholders and cash crop farmers. Raymond and the FMSB founders shared a good business relationship, supplying fertiliser to each other.

“FMSB is the pioneer in introducing specialty fertilisers comprising macronutrients, micronutrients, foliar and NPK water soluble fertilisers to the Malaysian market, ” says Edward, adding that the acquisition of FMSB allowed the group to extend its market from cash crop farmers to dealers as well as small and medium-size plantations.

The early days of FMSB saw its team working with cash crop farmers in Cameron Highlands to introduce water-soluble fertilisers and cultivation techniques for fertigation and hydroponic farming. Since then, the cash crop industry in Cameron Highlands has grown, and farmers from the region now export tomatoes to as far as Dubai.

FMSB is one of the market leaders in Malaysia where supplying to farmers are concerned and its products are now selling in Africa and China too, “two countries that have very strict importation standards for fertilisers but they accepted our export products, ” says Edward.

“We’re looking to increase our overseas sales to 50% and we’re optimistic that the volume will double in five years as we open new markets as well as increase our current market presence, ” says Edward.

FMSB’s biggest overseas markets are in East and South Africa with plans to expand to other regions.

“We have plans to increase the production capacity for foliar and NPK water soluble fertilisers to expand our market presence locally and globally, ” he adds.

Besides fertilisers, FMSB also has a general trading division that deals with a wide range of nettings for agriculture, aquaculture, industrial and domestic use.

From a fledgling company, AMSB has become a force in the local market and over the years, has diversified its product offerings through research and development.

Likewise, FMSB’s footprint has extended to the overseas markets from supplying local cash crop farmers in the early days to supplying markets in Africa and China, with plans to grow sales.