Top five themes investors are likely to look out for this week:

Investors have zero doubt the U.S. Federal Reserve will cut interest rates on July 31 for the first time in more than a decade. For weeks, money markets have bet on a 25 basis point rate reduction in July, CME Group's FedWatch tool shows, and while chances of a half-point cut briefly shot up to 60% in mid-July, they have settled back at around 25%.

But interest rates may not be the only item on the to-do list during the two-day debate around the Fed's board room table. Currently, the U.S. central bank rolls off billions of dollars of maturing bonds from its balance sheet each month without reinvesting the proceeds. That balance sheet reduction -- quantitative tightening as it's known -- has, since October 2017, whittled down what had been $4.25 trillion of bond holdings which the Fed accumulated between 2008 and 2014.

The programme is set to end in September, but with only a month to go, why wait? Many Fed policymakers are leery of having two policy tools -- interest rates and balance sheet size -- working at cross-purposes. Top Wall Street firms, Goldman Sachs among them, are in the end-it-now camp.

The European Central Bank is expected to go in all-guns-blazing with a variety of stimulus measures to ward off the curse of "Japanification" -- depressed growth, near-zero inflation and low or negative interest rates. But in Japan, which has been trying for years to extricate itself from that situation, policymakers have an even tougher job.

The Bank of Japan is divided on whether to ease policy or hold off. A rate cut would seem to make sense given Japan's dwindling exports, exposure to a slowing China and unwelcome currency strength. Oh, and stubbornly low inflation of course.

On the other hand, Japan's banks are already agonising over negative interest rates. And many argue it may not be wise to dip into an alarmingly bare toolkit and use precious ammunition now, only to see the yen swiftly reverse any post-cut falls when the Fed lowers rates.

But not doing anything while everyone takes action is also not advisable. From that perspective, the ECB standing pat this month gives the BOJ some breathing space -- it may use words rather than action to show it will not lag behind when it comes to easing policy.

It's going to be a busy central banking week. The BOJ and Fed meetings will be followed by the Bank of England on Aug 1. It is expected to keep interest rates on hold as policymakers wait for the Brexit fog to clear.

But the meeting will be watched for policymakers' assessment of the British economy's current downturn, and how they might respond should the UK exit the European Union without a transition deal under new prime minister Boris Johnson.

Sterling has fallen more than 5% since May, largely on fears of a disorderly no-deal Brexit. Johnson, less than a week into the job, has already clashed with Brussels after he again called for the withdrawal deal to be rewritten and vowed to take Britain out of the EU on Oct. 31 regardless.

BoE policymakers must also contend with stuttering growth. Some analysts reckon the economy shrank in the April-June quarter; another poor showing this quarter would tip it into recession.

Markets now price in a 75% chance of a 25 basis point cut in interest rates in 2019 from the current 0.75%. That's a U-turn from a few months ago when a rate hike was expected by some. Still, the BoE may resist the global monetary easing tide and push back against rate-cut expectations. That would allow sterling to find support near 27-month lows of below $1.24
Article type: metered
User Type: anonymous web
User Status:
Campaign ID: 46
Cxense type: free
User access status: 3 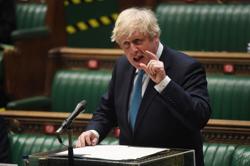