The perception of toll highways

PLUS Malaysia Bhd, has spent approximately RM1bil in 2016 for the maintenance of its long network of highways in the country

About 61% of respondents in a recent survey conducted by the Malaysian Highway Authority (MHA) felt that toll rates were high.

A total of 5,808 respondents participated in the survey, comprising both toll and non-toll users. The survey covered the entire country, lasting for eight months via face-to-face and online distribution. The respondents were mainly from the central region and use toll roads to travel to and from office and also school.

The whole idea of the survey was to gauge public perception on toll highways. There are about 26.8 million registered motor vehicles in the country.

MHA says that the findings of the survey “inferred that toll spending does not significantly impact the overall household expenditure of highway users.’’

It says toll payment accounts for 1.8% to 5.8% of household expenditure.

The main reason why the respondents felt toll highways were highly priced was that they were not getting value for money because of the constant congestion on the highways that does not help reduce traveling time.

The whole idea of using highways is to reach our destination faster, but that is often not the case because of the constant congestion.

If congestion is identified as a problem, then it needs to be addressed or public perception will not change.

“In order to appreciate and more importantly meet these expectations, the concession companies, authorities and the relevant agencies must be bold enough to identify all weaknesses and make room for improvements,’’ MHA says. The findings were shared by MHA during the recent 2019 Highway Concession Conference in George Town.

Abolishing tolls was part of the Pakatan Harapan government’s manifesto in the 14th general election. It wants to review all toll agreements and renegotiate to derive the best value for money for consumers and gradually work towards abolishing tolls.

Recently, the government made a RM6.2bil bid to take over four concessions of toll highways. This could save taxpayers RM5.3bil in compensation to the concessionaires.

It was reported that the proposed takeover of the four urban toll highways goes to show the government’s commitment to not only making sure there will be no more toll hikes, but also for consumers to enjoy lower toll rates during off-peak hours, and this will cease upon the expiry of the current concession periods for the four highways.

As for the proposed takeover of PLUS Malaysia Bhd’s North-South Expressway (NSE), it has yet to be tabled in the Cabinet. Maju Holdings Sdn Bhd has submitted a proposal to take over the NSE. 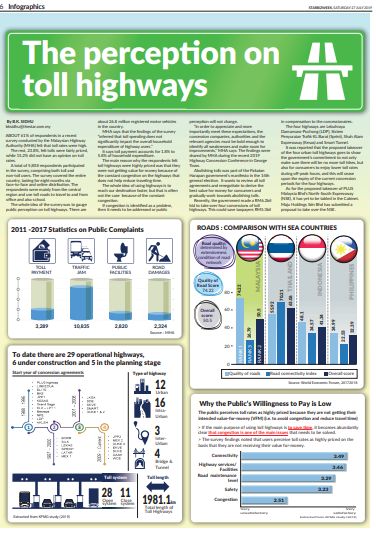