Economy likely to get worse before it improves

IF anybody had been waiting for confirmation that more is to come from the current slowing economic environment, they need not go further than to scrutinise the statement by Finance Minister Lim Guan Eng.

Lim, in an interview recently, said that it would be challenging for the government to meet its fiscal targets for next year, as the lagging effect of the global trade war could hamper its efforts.

In 2020, the government has set a target to bring down the federal government budget deficit to 3%. The fiscal deficit was 3.7% last year and is expected to be down to 3.4% this year.

Another clear sign that the start of the slowdown cycle is just beginning is the Federal Reserve’s (Fed) move to reduce its interest rates to counter the slowing economy in the US. The Fed has not cut rates yet, but the signs are all there.

Short-term US Treasury yields are down to the 1.86% level that was last seen in December 2017. Germany and Switzerland have gone back to negative interest rates, meaning that deposits do not earn interest.

It was only two years ago that central banks signalled that interest rates would start to rise as part of a policy to normalise the monetary policy. The rates were dropped to ultra-low levels in 2009 and kept low until 2017. It was a policy response to help reflate the US and developed economies that had suffered from the 2008 financial crisis. 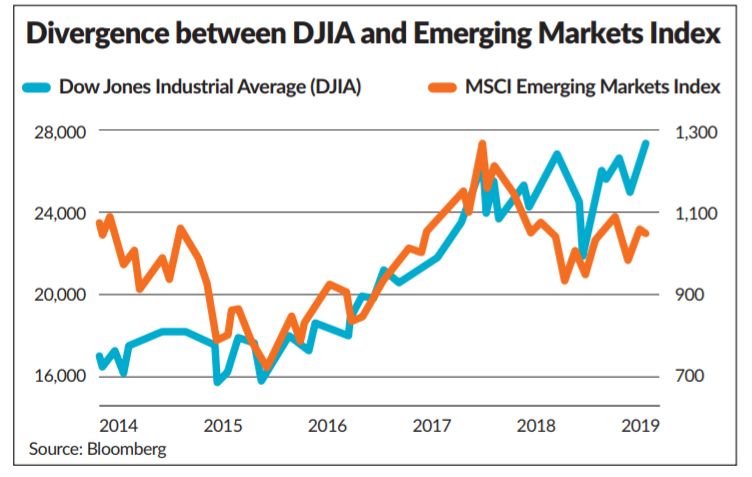 Other than dropping interest rates to almost 0%, the Fed has also embarked on bond-buying programmes to pump money into the system. Other central banks in the UK, Europe and Japan followed similar measures.

It resulted in a synchronised global economic recovery. By 2016, all developed economies saw growth, accompanied by higher employment and low inflation. It was perfect for the stock market. Wall Street hit record highs with technology stocks hitting ultra-high valuations.

The party ended when President Donald Trump won the presidency in November 2016. The cornerstone of his campaign was an `American First’ policy. The policy effectively called for rectification in the US trade imbalance, reducing the migration into the country and luring US companies back home with lower tax rates. To achieve the objectives, the trade war started, a wall is to be built along the Mexican-US border and globalisation was put in reverse gear.

The International Monetary Fund (IMF) has predicted global growth to slow to 3.2% this year and rebound to 3.5% next year. The IMF’s latest forecast is a revision from the numbers it had predicted in April this year, which is just three months ago.

The revision after just three months shows that the economic dynamics are moving fast and fears of a recession setting in are creeping up.

The trade war has had an effect on the global supply chain, which in turn impacts manufacturing hubs such as Malaysia. We are not helped by the fact that commodity prices are still low.

But it does not mean that all is bad for Malaysia and other emerging markets, especially the Asean region.

Values have been largely subdued in the Asean region. In the last 10 years, apart from China and India, valuations of emerging stock markets have moved sideways unlike that in the US.

Currently, Bursa Malaysia is trading at about the 1,650-point level, which was the level the local stock market traded in September 2012. The highest it hit was 1,882 in January 2014.

Like many other countries, Malaysia is going into a slowdown. And it may get worse, considering that the external economy is weak, but it does not mean that all is lost for emerging markets.

The bright side is that although the US is reducing interest rates, money is not going into the US equity market as much as it used to. Instead, it is going into safe assets such as high-quality debt papers and government bonds.

This is probably because monetary measures such as reducing interest rates alone is not enough to reflate the economy as large as the US or Europe. There has to be structural changes.

In respect to this, the US does not have much room to manoeuvre, as it has already brought down the tax rate, which gave a boost to corporate earnings.

This is one reason why even though the US is bringing down the interest rates, the money is not going into the equity market there. Instead, money is going into safe assets such as government and high-quality debt papers.

Capital markets are efficient. The money moves to places where it can get more value than just the yields offered by low-risk debt papers. In this respect, value should emerge in markets such as Asean. The changing demographics and urbanisation calls for governments to reform their way of handling public funds and charting out their growth strategies. Asean is already a beneficiary of the China-US trade war as more companies re-locate out of China. Among Asean countries, Malaysia can count itself as having seen the most number of reforms in the way government policies are formulated and the handling of public funds. The old contracts have been re-negotiated and given out at a reduced cost. New contracts are to be tendered out.

The move to weed out corruption is on overdrive. Towards this end, the Finance Minister had said that the government has managed to deploy RM2.4bil more into development expenditure from its measures to see that public funds give a better return on investment.

Rating agencies have maintained Malaysia’s rating despite the declared debt level of the country being re-stated at just over RM1 trillion. It was 75.4% of the gross domestic product as at end-2018. However, both Fitch Ratings and Standard & Poor have maintained their ratings on Malaysia.

A setback is Malaysia’s political instability. It has increased and will continue to be in the same mood as long as there is speculation on the transition from Prime Minister Tun Dr Mahathir Mohamad to his successor. Fortunately, it has not had a profound bearing on the stock market yet.

The reason is probably reforms, a term foreign investors favour when they decide to put in their money. As long as it continues, the bumpy ride into next year should be temporary.

The views expressed here are solely the writer’s own.