Stocks down but recover from post-election slump

Recovery under way: Based on the 300 largest companies on Bursa Malaysia, research has found that listed companies have recovered from the plunge in share prices since the 14th general election last May. — AP

THE first-half of the year has been eventful, to say the least. With external pressures from an ongoing trade war between the United States and China influencing equities throughout the world, many markets felt the brunt of uncertainty.

It was no different for Malaysia, which had already been labelled as the worst-performing stock market in Asia. Disappointing corporate earnings and slowing economic growth compounded the pressure felt on equities, but the overall performance of the market is not reflected in the more narrow showing of companies.

Based on the 300 largest companies on Bursa Malaysia, research has found that listed companies have recovered from the plunge in share prices since the 14th general election last May.

In the past six months, the total market capitalisation of the 300 largest companies on Bursa Malaysia has increased by RM38.3bil or 2.4%. The FBM KLCI during this period fell 1.1%. Research has also found that the major gainers during this time were the telecom companies and construction stocks.

topped the three gainers with a total gain of RM18.9bil, as the telecommunications sector recovers from the early pressure caused by the call by the government to reduce broadband prices.

Axiata and Digi’s share prices were also lifted by the announcement that Axiata and Telenor were engaged in a merger of their telecommunications assets in most of the countries they operate in.

Stocks in the construction sector saw a recovery in their prices due to the move by the new Pakatan Harapan government to reinstate and revive some of the mega-projects like Bandar Malaysia, the East Coast Rail Link (ECRL) and the Pan-Borneo Highway.

The recent 51% acquisition and subsequent mandatory general offer by YTL Cement Bhd of the shares of Lafarge Malaysia Bhd at RM3.75 per share, representing a 107% premium to its share price of RM1.81 as at Dec 31, 2018, also spurred investor interest in some of the battered-down construction and building material stocks. The biggest losers during the first six months were petrochemical companies and the banks.

’s share price fall was mainly due to the decline in its profit after tax and revenue during the first quarter of its current financial year, which fell 38% and 18%, respectively. The fall was due to softer global demand for its products arising from the ongoing trade war.

The three largest banks in the country – Malayan Banking Bhd

– saw a combined loss of RM17bil or 6.6% of their worth in market capitalistaion as foreigners continued to sell the shares of these expensive large-cap banks out of fear of a slowdown in loan growth.

On the flip side, RHB Bank Bhd managed to achieve an increase in its market value of RM1.2bil or 5.7% higher due to its cheap valuation, which attracted investors to accumulate its shares. 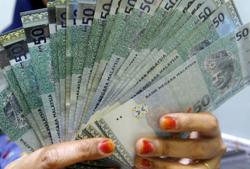