The positive crossing suggests a return of positive sentiment and a continuation of the short-term rally seen on the daily price chart.

The short-term SMA lines have turned towards a positive trajectory following the recent gains, offering lift to the share price.

Techbond has been on a protracted downtrend since January this year after falling off a historical high of RM1.02.

The share price only found bottom at 66 sen in the first week of June, which subsequently led to rebound and recovery.

For the immediate term, the share price is testing a resistance of 74 sen.

Given the rising momentum on the technical indicators, there is a possibility this hurdle will be taken out, following which the share price would test the 100-day SMA at 78 points.

While the slow-stochastic momentum and 14-day relative strength indices are both in overbought conditions, there is yet to be any indication of a retreat in momentum.

The daily moving average convergence/divergence line also reflects growing momentum as it rises more sharply off the signal line. This would suggest that the immediate uptrend remains intact and is growing stronger.

The immediate support level for the stock is pegged to 68 sen, near the short-term moving averages.

A fall below this point would be a bearish development for the stock, suggesting the end of the current recovery and a return to a downtrend. A further supporting price can be found at 66 sen. 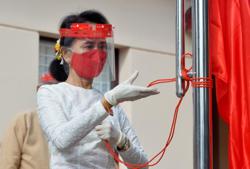