Scomnet unit to continue being global supplier to Edwards Lifesciences 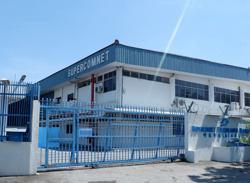 Business hub: (from left) Wang, Ong and Kamala at the event.

KUALA LUMPUR: Global medical technology company Edwards Lifesciences Corp is setting up a regional business hub here and it will be investing RM100mil over the next five years.

The California-based company, with a market capitalisation of US$37bil, has two Malaysian companies which are part of their global suppliers – Supercomal Medical Products Sdn Bhd, which is a subsidiary of Supercomnet Technologies Bhd

“Supercomal and SteriPack, are our global suppliers. We have an existing business relationship with them,” said Edwards Lifesciences vice-president, strategy and marketing for JAPAC Jeremy J. Curtis.

The JAPAC region contributes some US$600mil or 16% to Edwards Lifesciences revenue in 2018. The company made US$3.7bil last year.

The 61-year-old company, which is the first company to develop the commercially viable artificial heart valve, is listed on the New York Stock Exchange.

In October 2017, Scomnet announced that it had entered into a shareholder agreement to buy the remaining 80% stake in Supercomal. Prior to the acquisition, Supercomal was a 20% associate company of Scomnet.

It was a related-party transaction, where the vendors of Supercomal were also the major shareholders of Scomnet.

As the bulk of the acquisition was made via the issuance of new shares, Scomnet’s share base has increased from 243 million to 643 million shares.

Scomnet’s share price has been on an upward trajectory. On a year-to-date basis, the stock is up 70.5% at its last price of 95.5 sen, which could be due to orders from Edwards Lifesciences.

“We choose Malaysia because of the location, highly diverse culture and multilingual population. The talent pool here is highly-educated,” he said.

The business hub is the second for the Edwards Lifesciences after the first which was set up in Prague 10 years ago to cater for the European region.

Over the last five years, more than 3,700 patients in Malaysia had received Edwards Lifesciences’ heart valves or replacement therapies at the National Heart Institute.

Also present at the launching of the business hub were Deputy International Trade and Industry Minister Dr Ong Kian Ming and US Ambassador to Malaysia Kamala Shirin Lakhdhir.