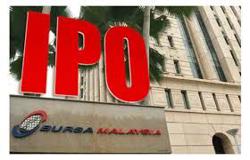 PETALING JAYA: QSR Brands (M) Holdings Bhd is tight-lipped on its new listing date after its shareholders and directors decided to postpone its initial public offering (IPO) on Bursa Malaysia.

Despite rumours claiming that the IPO would be relaunched in the fourth quarter of 2019, managing director Datuk Seri Mohamed Azahari Kamil declined to confirm it, saying the announcement would be made at an appropriate time.

Meanwhile, he said looking at the industry's growth, the potential for KFC and Pizza Hut operations remained tremendous.

"So the plans for expansion is ongoing," Mohamed Azahari said, adding that the company was also developing digital payment kiosks as part of its digitalisation exercise.

QSR Brands planned to open at least 67 KFC branches and 60 Pizza Hut outlets nationwide in the next three years, he told reporters after the launch of the Diploma Programme in Restaurant Management by SEGi Group of Colleges.

He said QSR Brands, SEGi and Penang State Islamic Religious Council (MAINPP) had signed a tripartite agreement to provide the B40 group access to education and employment.
Under the agreement, the students taking the diploma course will be able to undergo a one-year industrial training at more than 700 KFC outlets nationwide.

Additionally, MAINPP will identify 500 B40 students from 30 schools in Penang to give them the opportunity to take the three-year course, which is part of SEGi's Skill Academic Grant programme.

"We should not depend solely on the government to help the needy students, Malaysians can work together to help other Malaysians," he said.

Teng said since it was set up in 1977, 200,000 local and international students have acquired skills, knowledge and qualifications at SEGi.

He said the college offered scholarships for underprivileged students with a fee waiver of between 30 per cent and 100 per cent.