Brutally-honest: Tan, who is a seasoned hand in the fund management industry, will enlighten participants about the economies and stock markets of China, the United States and Malaysia for the coming quarters.

IF you wish to know about the country’s future in terms of politics, economics and markets in a blunt and brutal manner, then head for ICAPITAL.BIZ BHD

iCapital will also be discussing about the new government and whether the political parties are simply a coalition of convenience.

This year will be the 30th anniversary of Investor Day.

Founder and fund manager of iCapital.biz Bhd Tan Teng Boo, who is a seasoned hand in the fund management industry, will enlighten participants about the economies and stock markets of China, the United States and Malaysia for the coming quarters.

The 65-year-old chief executive officer of Capital Dynamics Asset Management Sdn Bhd is known for his brutally-honest thoughts on the challenges affecting Malaysia and the world. He has been advocating his optimism on China and its growth over the next few decades .

Tan will share about what value investing is in a world of low interest rates and constant technology disruptions under the concept of “New Value Investing”.

In 2015, Tan said: “If we were to take a sleeping pill and sleep for 50 years, Malaysia may become Argentina.”

Is he still holding on to this opinion?

Adding zest to the event will be Permatang Pauh MP Nurul Izzah Anwar who will examine issues around New Malaysia, the structural problems as well as its political and economic future. Not bullish: The FBM KLCI is trading at levels that only those who believe in musical chairs will understand. When one looks beyond the FBM KLCI, a lot of stocks have plunged. — AP

On the second day of the event, Tan will be speaking on China from a different perspective.

“The world now feels it needs China. Perhaps it is the other way around, and China needs the world,” he says.

Among the issues to be discussed are:

> How will China’s Belt and Road Initiative impact the country and businesses?

> Will there be World War III between the world’s two superpowers?

> Should one explore business and investment opportunities in Africa, just as China has been doing?

> In its dealings with China, is the United States making the same mistake it made many decades ago?

Among the panel of speakers for day two is vice-president, Centre of China and Globalisation Victor Gao Zhikai. Gao was the English interpreter to China’s iconic leader Deng Xiaoping, from 1984 to 1988, when China was in the throes of opening up and reforming.

James Bradley, a renowned author with four best-selling books including ‘The China Mirage’ which discloses the history of American disasters in Asia, especially with regard to China.

Another interesting speaker is Dr Goh Chor Ching, who is economic adviser to the World Bank. She is a Malaysian with over 20 years of experience in the World Bank and is fluent in English, Chinese, French, Japanese among other languages. She has rich knowledge on the implications of China’s Belt and Road Initiatives.

Professor Peter Kagwanja is an executive of the Africa Policy Institute. Africa is often seen as a faraway continent with little hope. In In the next 40 years, Africa will have 1.3 billion people.

Kagwanja will explore the often overlooked relationship between China and India.

Professor David De Cremer from the National University of Singapore will be giving his insights on Huawei’s success. Cremer is also co-author of the book “Huawei: Leadership, Culture and Connectivity”.

icapital.biz is a closed-end fund listed on the main market of Bursa Malaysia. It is managed by Capital Dynamics.

It is an independent fund manager and investment adviser. It currently manages assets worth some RM1bil.

Following are excerpts of an interview between StarBizWeek and Tan.

StarBizWeek: What is your market outlook and how would you position yourself and your fund? Tan: In terms of Bursa Malaysia, we are not optimistic for 2019. Its valuation is high. For example, the trailing PE ratio for the FBM KLCI is around 22 times, up from just 16.5 times a year ago. If the FBM KLCI is trading at 16.5 times trailing PE ratio, the FBM KLCI should only be trading at around 1,260 points or 25% lower than what it is now. Are there any good reasons for its current high valuation? A simple answer is none.

Investors should actually look at the European Union (EU), Britain and Japan. These economies are slowing down fast. Germany narrowly missed a recession while Italy is already in one. With the not-hilarious Brexit comedy, Great Britain could soon be Little Britain. Japan has long ago become Land of the setting sun.

Even the United States is faltering. If you stopped listening to the deafening Trump’s chest thumping, we can see signs of a sharp slowdown in the United States. Retail sales, industrial production, and the weekly initial claims are all pointing to a slowing US economy and investors have ignored the US yield curve, which has flattened substantially since 2018.

For Malaysia, where exports will make or break her economy, we should be worried with the fall in global new export orders (see figure 1).

They have plunged into contraction region, implying that 2019 will be very tough for Malaysian exports.

Global semiconductor sales have fallen, and crude oil price is struggling to stay where it is.

As if the damage from the attack on China were not severe enough, president Trump looks set to open a new front in his trade wars with a plan to end preferential trade treatment for India. India is the world’s largest beneficiary of the Generalised System of Preferences.

I have compared president Trump with president Hoover, who was America’s president in the 1930 Great Depression.

The other major concern is that the United States is dividing the world into camps. Based on its totally lack of understanding about China and her policies, the Trump administration is aggressively and unnecessarily pushing the whole world into a state of confrontation. America First has become to mean America Only.

World trade is the only engine of global growth for every country, including the United States. A shrinking world trade simply means a shrinking global economy, which will adversely affect every economy in the world, including the increasingly isolationist US.

In using tariffs to literally attack every major trading nation, Trump is in effect acting like Herbert Hoover in 1930.

Those opposing globalisation have gotten their socio-economic analysis completely wrong.

Shrinking world trade, in terms of declining exports and export orders, can and will create plenty of social and economic problems for every country, including the paranoid United States.

Are there any other concerns? My other concern is investors’ complacency. With cheap money, risk seems to be a four-letter word not to be feared.

Which part of the cycle are we in? A mature bull market or do you feel, the big fall is coming?

In terms of economics, the recovery is mature. The question is whether the current economic slowdown will become a full-fledged recession. The answer to this crucial question depends a lot on Trump and his antics. 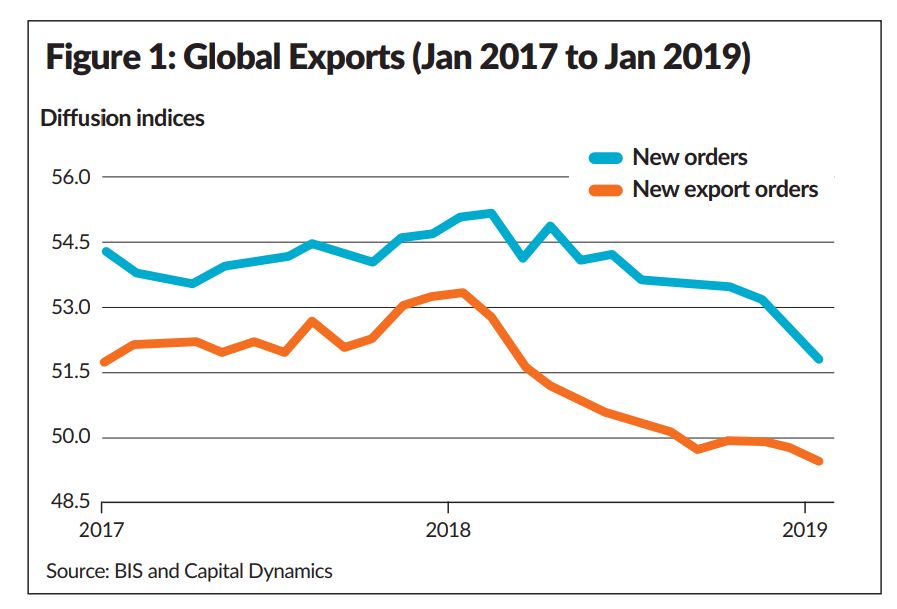 Even the very comprehensive Wilshire Index entered bear territory in the last quarter of 2018.

In terms of the Malaysian stock market, the bull ended some time ago. The FBM KLCI is trading at levels that only those who believe in musical chairs will understand. When one looks beyond the FBM KLCI, a lot of stocks have plunged.

As the Hokkiens would described it, they have plunged until you cannot recognise your own house. It is not just the BATs, the Telekoms, the many politically-linked stocks or the property and property–related stocks. ASTRO

, M Flour, Signature International, and many more have seen their stock prices fall.

What are some of the indicators of an impending bear market?At Capital Dynamics, we look at the US monetary policy, its yield curve and perhaps most importantly, corporate earnings.

Are your clients anticipating a drop, or are they confident?We have loyal clients. Without them, we would have closed shop a long time ago. They trust our discipline, patience, judgement, and most importantly, integrity.

The economy is on a better footing. Fundamentally, we are expected to see growth in most regions.

Do you expect better earnings to also help prop up stock markets?The economy is not on a better footing, whether local or global. Malaysia’s leading indicators are negative and not bottoming yet; the same for the OECD Composite leading indicator. Global trade in goods plunged towards the end of 2018. From the EU, the UK to Japan and the United States and China, 2019 will see further economic slowdown.

Let me quote our i Capital newsletter dated Jan 17: “As the eurozone flirts or enters a new recession in 2019, what can sick Europe do? Make the negative interest rate even more negative? Restart its asset purchase programme and make a mockery of its monetary policy?

Side with Italy’s populist approach and abandon fiscal austerity? Finally wake up to the fact that the whole of Europe has simply got to work harder and stop being so lazy while earning high salaries anyway? Fix their divisive and destructive politicking?

Or better still, get cuddlier with the United States and bash China even more? Has Europe forgotten that it was China’s economy that bailed the whole sickly bunch of them out of the 2008 coma? Depending on how one defines the term, the eurozone and the UK still form the largest economic block in the world.

A slide into recession at a time when the US economy is also expected to run out of steam in 2019 would make for a scary global economy. China will not be launching a 2009- type of stimulus any time soon.

You are obviously very negative on the United States. I am very worried about the US political leadership, Trump’s administration and its economic policies. It has made a lot of mistakes in her relations with China, and it looks like it is repeating the same mistakes and unnecessarily worsening an already weak global economy.

You’ve always been bullish on China. Can you provide a snapshot on China’s growth phase and what to look forward to?The past 40 years of China’s transformation have been breathtaking. To me, the next 40 years will be even more exciting and will be very rewarding for those who can take a long-term view.

What is your personal conclusion on Malaysia politically and economically?People say that an enemy of your enemy is your friend. I would say that when the common enemy disappears, the old enemies will re-appear. In Malaysia’s political landscape, I see “old crooks, new crooks, regular crooks”.

Malaysia needs to take a truly new direction. We are still practising race-based politics and until we truly embrace and live by meritocracy, we cannot expect our fortunes to change. How can expect greatness if our own attitude is still to side with mediocrity.

I feel that nothing has really changed. Besides, there is no clear division of responsibilities between the Finance Ministry and Economic Affairs Ministry. With such obscurity, how can the country deal with the next economic crisis?

People may call me a pessimist, but I feel that Malaysia has reached the point of no return.