, is progressively expanding its presence in Malaysia and Australia.

"In the past, a RM10 million project was considered a very big project but nowadays projects are going beyond this number.

"Due to this reason, we decided to bring Uni Wall APS to another level and have it listed on the LEAP Market of Bursa Malaysia for fund raising in order to enhance our production capacity and working capital," he said in a statement today.

The listing exercise entails the issuance of 45.70 million new ordinary shares, which represents 12.5 per cent of the enlarged issued share capital of the company, at an issue price of 16 sen per share to selected investors.

Uni Wall APS had successfully raised RM7.31 million of proceeds, with RM3.50 million would be used for the setting up of new factory on a vacant land adjacent to its existing factory and head office in Semenyih.

"The company expects the fabrication capacity to be increased to about 10 hectares from about 4.9 hectares of panels per month upon its commission by the first quarter of 2019," it said.

It said, another RM3.01 million of the proceeds would be used for working capital purposes and the remaining RM800,000 would be used to defray the listing expenses.

Shares of the building faÃ§ade services provider remained in the positive territory at mid-afternoon after it opened at 20 sen or four sen premium to its offer price of 16 sen. 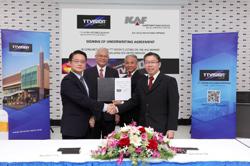