KPMG: CEOs still rely on intuition in this digital and data-driven era

THE Industrial Revolution 4.0 is upon us and business leaders around the world are seeing this technology-driven change as a momentous opportunity to be the disruptor and take their business to the next level.

According to KPMG’s “2018 Global CEO Outlook: Growing pains” report, CEOs are excited about the sweeping changes that technology brings.

At 95%, almost all CEOs see technological disruption as more of an opportunity than a threat.

Interestingly, 70% of CEOs in Asean are actively disrupting the sector they are operating in rather than wait to be disrupted by competitors; this is markedly higher than the percentage recorded at the global level (54%).

To win the technology race, 72% of CEOs say they are personally ready to lead a radical organisational transformation. They are embracing the likes of artificial intelligence (AI) and the Internet of Things (IoT) to reshape their businesses.

In fact, 87% of CEOs believe AI and robotics technologies will create more jobs than it eliminates; in Malaysia, 80% of CEOs surveyed have already started piloting AI in a small number of processes.

This is a far cry from the past where traditional business models used to be the foundation upon which technology was later interlaced.

Today, both technology and strategy are tightly intertwined. And the expectation is for business  leaders to realign their current workforce and provide avenues for their employees to upskill, so that they are prepared for the machine age. 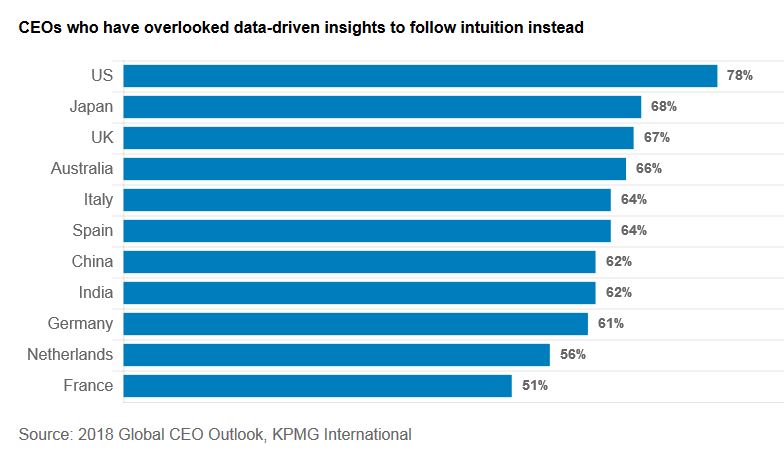 Despite the increasing influence of data and analytics, KPMG’s survey found that CEOs still cling to their own intuition; 80% of CEOs surveyed in Malaysia said they have chosen to ignore the insights provided by data and analytics models

or computer-driven models because they contradicted their own experience or intuition.

This is why business leaders want to understand where the data that inform predictive models are derived from and whether it can be trusted.

Interestingly enough, CEOs appear to place a high degree of trust in data and information from social media sources.

Our survey revealed that 87% of CEOs in Asean trust the information on social media, while government-commissioned research is the least trusted source of information at 51%.

This shift in trusted sources is aligned to changing consumer behaviour and market changes, which bears further study.

Millennials will form a huge part of the consumer markets of the future as they represent significant spending power.

KPMG’s survey notes that millennials tend to engage with organisations and brands in novel ways, and businesses would be wise to make sure they are in sync.

Presently, 70% of CEOs in Malaysia admit their biggest challenge is attracting millennial’s attention among competing online content from other brands and publishers, which is higher than the Asean average of 53 percent.

Across the region, business leaders say their organisation struggles to understand how the needs of this generation differ from those of older customers, with 45% also revealing a difficulty to reposition their brand to appease and appeal to millennials.

The same percentage admit to questioning their ability to respond to millennial’s expectations of on-demand service.

The companies that will bridge this generational divide are the ones that will listen, think about what their corporate and brand values are, and ask if they are aligned with the values of millennials and future cohorts.

It’s clear from our global survey how new and evolving forces are continuing to raise the bar for CEOs. The urgency to respond to an ever-expanding spectrum of complex challenges and "growing pains" are what’s keeping CEOs awake at night.

This is understood to be the reason for the tempered optimism shown where 77% of Asean leaders are predicting a cautious revenue growth of 2% or less over the next three years for their organisation.

In an environment where customer demands are constantly changing, new technologies are emerging and new competitive threats are surfacing, acting with agility is the dominant currency of business.

Agility is also about being able to spot new opportunities and effectively using sophisticated data and analytics.

High-performing CEOs will be those who can marry their experience and intuition with data-driven insight.

Datuk Johan Idris is managing partner at KPMG in Malaysia