PERMODALAN Nasional Bhd (PNB) is set to become Sapura’s largest shareholder with an equity stake of up to 40% (from 12% currently) following the completion of the group’s proposed renounceable rights issue of up to RM4bil.

This involves 30 sen rights shares on a five-for-three basis with one free warrant for every 10 rights shares subscribed with new Islamic redeemable convertible preference shares (RCPS) at 41 sen per RCPS to be allocated on a ratio of two RCPS-to-five shares.

As this exceeds the mandatory takeover threshold of 33%, PNB is applying for an exemption to undertake a general offer for the remaining shares.

PNB has given an undertaking letter to Sapura to subscribe for its rights entitlement and the excess shares and warrants not taken up by the other shareholders, up to an equity stake of 40% in the group.

This could mean that PNB will be taking up to 57% of the rights share offering.

PNB will also subscribe for the entire RM1bil RCPS offering.

Assuming full conversion at the end of the RCPS’ five-year maturity, PNB’s stake could rise further to 48%.

However, AmInvestment Bank understands that Sapura intends to fully redeem the RCPS before its maturity.

President and CEO Tan Sri Shahril Shamsuddin via Sapura Technology Sdn Bhd has also given an undertaking to subscribe for a miniumum rights entitlement of RM300mil.

Maybank Investment Bank and Credit Suisse have given an undertaking to subscribe for the remaining RM1bil rights shares not subscribed by PNB or Shahril, which means that the proposed rights exercise is a “done deal”. 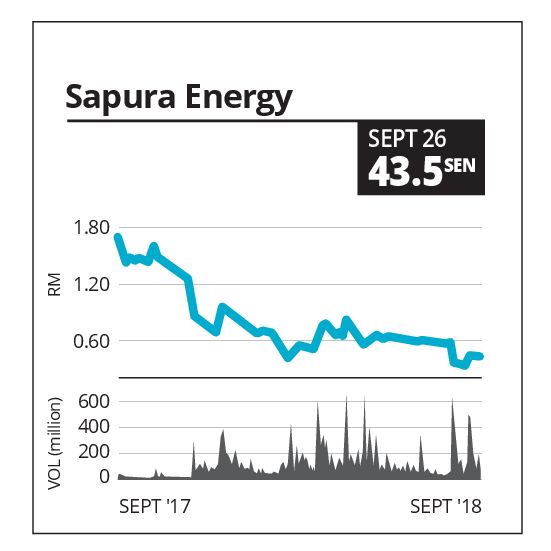 VS Industry’s (VSI) fourth quarter financial year 2018 (4Q18) results are slightly above expectations, with FY18 core net profit at RM159.4mil, accounting for 107% of both UOB KayHian and consensus’ full-year forecasts.

The core net profit excludes RM8.6mil related to the disposal of Qingdao Electronics by its 43.5%-owned VS International Group’s write-down on its associate in Vietnam, and impairment loss on properties (FY17: RM16.1mil of exceptional items).

The outperformance was due to better-than-expected margins on the back of improving operating leverage from higher sales derived from its key customers.

1Q19 is expected to be stronger quarter-on-quarter on higher sales volume of box-built products for its key customers due to the Black Friday event and the holiday seasons, and also in anticipation of the launch of a new product by one of its key customers in the fourth quarter of 2018.

VSI’s run-up in share price may be due to potential new investments by one of its key customers.

He added that the government would amend “restrictive” policies so that the key customer would be more keen to invest in Malaysia.

“In our view, the investments may be related to the home appliances segment given that the key customer had already poured in massive investment to build facilities for its other segment in its home country,” said UOB KayHian. 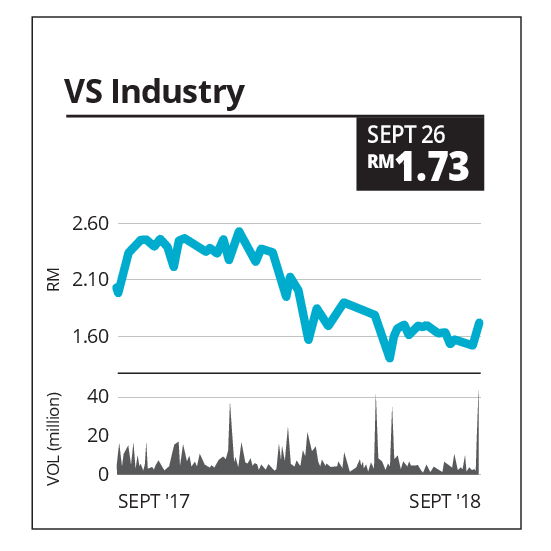 This is in view of the increase in volume of bottled water sold locally and lower advertising and promotion cost incurred in China.

For 2H18, MIDF Research expects earnings to be weaker mainly due to the rising cost of sales.

Nonetheless, this will be partially mitigated by the narrowing loss from China’s operation and continue resilient domestic performance.

About 70% of Spritzer’s cost of sales are in packaging. About 50% of packaging cost is made up of PET resin cost.

The research house gathered that PET resin price has spiked 24% y-o-y or RM1,000 per tonne in line with the uptrend in oil prices and weakening ringgit.

Due to the aforementioned factors, management is anticipating to increase its product prices by 5%.

“We expect the operating loss from China’s operation to narrow further in FY18 from RM10mil in FY17.

Previously, the group focused on renting space in retail outlets to display its products.

Management has since revamped its marketing strategies to engage directly with consumers.

This is premised on the expectation that Spritzer’s competitor will raise their prices as well to account for higher PET resin cost. 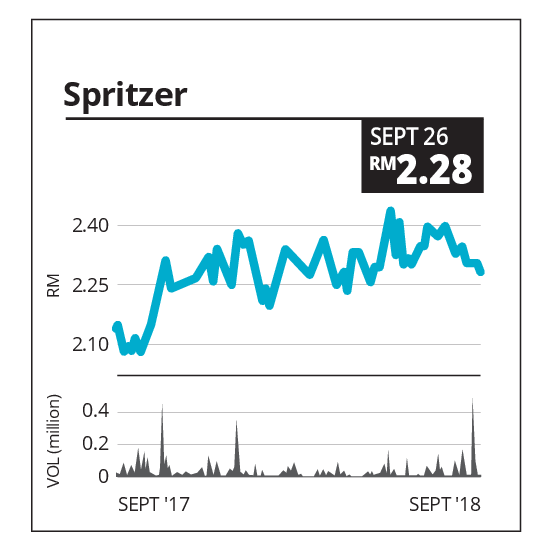 PESTECH’S wholly-owned subsidiary, Pestech Technology Sdn Bhd, has accepted a letter of award from Syarikat Pembenaan Yeoh Tiong Lay Sdn Bhd, under SIPP-YTL JV, for the turnkey EPC and maintenance of electrification system for the Gemas-Johor Baru electrified double-track at a fixed sub-contract price of RM399mil.

The project will take 26 months to complete by April 2021.

Pestech’s share price has been lacklustre for more than two years and it has finally secured this highly anticipated project, which was complicated earlier by the GE14.

As this announcement is only for the electrification portion, Kenanga Research understands that there are signalling and communication portions worth RM500mil yet to be announced.

With its partner Ansaldo, Pestech should have a better chance for the project as there is no other company which can do the signalling portion in the region.

This is the second contract Pestech has secured in FY19, totalling RM457mil and bringing total current order book to over RM2bil, which will keep them busy till 2021.

In the immediate term, the double-track’s signalling and communication jobs remain its top target while the potential projects East Coast Rail Link and KL-Singapore High-Speed Rail are the two main local electrification projects that Pestech can participate in the bidding.

“We continue to like this niche utility infrastructure play for its earnings growth story.

“In fact, its valuation is no longer excessive following the lacklustre share price performance in the past two years while earnings momentum remains strong,” said Kenanga Research. 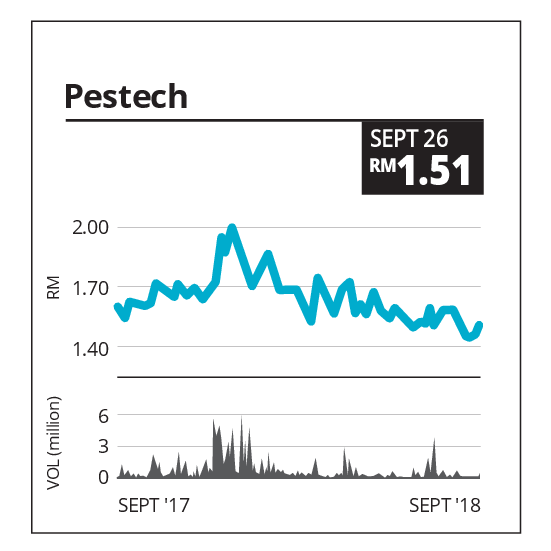