Lim: We are hands on and are able to respond faster when we manage our own malls.

As PGIM sells, developers and other funds buy retail space

JUDGING from the couple of retail deals in the last 10 days, small can be beautiful.

The SStwo Mall in Petaling Jaya is smallish. So is Aeon Mall Kinta City in Ipoh. Both of them have been sold.

The deals underscore the fact that small can be lucrative and attractive in the hands of innovative owners. Especially if the land it sits on is of a certain size.

The SStwo mall, closed for about three years now, will be making way for a mixed integrated development. Prime location: Koek says a 250-room hotel and some serviced apartments will be built in the SStwo mall area.

DK Group founder Danny Koek Tiang Kung says the plan is to build a 250-room hotel and some serviced apartments.

Koek says: “It has about 7.81 acres, so there is enough space for all the developments. Creating value: The Setapak Central Mall has net lettable area of 494,000 sq ft. It has a ready catchment because hundreds of residential units sit on the retail podium.

“This is an established and prime location and there has not been much development in the area in the last several years.”

The conversion of the mall, from a single-used development, to a multi-faceted one by the new owner also underscores the popularity of mixed integrated projects the last 10 years or so.

Mixed use projects seem to be the trend today with the residential-retail mix being the most popular combination. Newlook soon: There has not been much development in the area the last several years. This will change soon.

He plans to demolish the shops facing the houses on Jalan SS2/72.

Even as Koek is preparing to submit his plans to the local authorities for the SStwo Mall site, another deal involving a Setapak mall is in progress.

Besides the over-supply in office space, the rising retail space offered in mixed integrated development is posing a challenge for standalone malls.

To a certain degree, owners of standalone malls are competing with owners of retail space in mixed integrated development for tenants.

Says a mall owner in a vibrant part of the city: “Two new mixed integrated projects within walking distance of my mall will be ready soon. My tenants are being lured to go over.”

She is fighting tooth and nail to keep them.

This will be an ongoing challenge as more standalone malls and mixed used projects with a retail component are completed.

With such a scenario and the pressure on rental in Malaysia, it is little wonder why owners of small malls have decided to recycle their capital by selling their malls and going into something more lucrative.

“You have to be different in order to complete. It is always a balancing act even among the food and beverage (F&B). But have 35% of net lettable area for F&B is too much,” she says.

“We personally set up a team to manage the assets unlike many funds who outsource it. This sets us apart. We are hands on and are able to respond faster when we manage our own malls,” she says.

Lim says apart from the Aeon Mall in Melaka which is not managed by ARA, they are managing Citta Mall, Klang Parade, Ipoh Parade, 1 Mont’Kiara. Their jewel is Ipoh Parade.

Lim says there are nuances that managers must be attentive to.

“The idiosyncrasies of Citta Mall and Klang Parade, both in Selangor, is different. Citta Mall visitors are from the middle to mid-upper level. The Klang crowd is old money, they will buy property and cars but not spend the RM15 on coffee,” Lim explains.

When they first took over Citta, the number of visitors was unlike today.

“Citta has really turned around the last one year or so and we only did minor enhancements to enable more F&B to be added on the ground level,” she says.

Lim says the fund under which its Malaysian real estate are parked is seeking between 5% and 7% net annual yield.

On whether ARA group is buying Setapak Central Mall, Lim declines to give a direct answer.

“People come to offer us malls all the time,” she says.

Located at Jalan Genting Klang in Danau Kota, a Setapak township, Setapak Central is a three-storey retail with an NLA of 494,000 sq ft.

It has a ready catchment because hundreds of residential units sit on the retail podium. There are 1,100 parking bays for retail visitors.

The company’s strategy, says Lim, is to buy “under-performing” assets which they are able to value add and turn around.

“We see how we can move in and create value,” she says.

It depends on the particular fund which owns the asset. Some funds have a shelf life, that is, it is a closed-end fund. Others have a perpetual life, open-end fund.

Combined, ARA has a net lettable area (NLA) of 2.6 million sq ft currently. It sold its office space in Wisma Mont’Kiara last year to a Middle Eastern family but retained its retail portion.

If it seals this latest deal in Setapak, it will bring ARA’s retail NLA to slightly more than three million sq ft, and its total portfolio of assets to six.

PGIM used to have five malls, all of them small neigbourhood developments – AEON Mall Kinta City, which it sold to KIP REIT recently, the SStwo Mall which was sold to DK Group.

According to sources, it may not be so easy to find suitors for the Seremban and Penang retail space.

Seremban Prima’s NLA is said to be about 200,000 sq ft, a size that is neither here nor there.

It is slightly smaller than the Intermark Mall, six-storey podium with NLA of about 225,000 sq ft located at the intersection of Jalan Tun Razak and Jalan Ampang.

That Intermark Mall was bought by Pavilion REIT (PavREIT).

PavREIT and Malton Group are linked to property tycoon Tan Sri Desmond Lim Siew Choon, who is a substantial shareholder and chairman in both entities.

Island Plaza, Penang will also not be so easy to sell, a source says.

“It (PGIM) does not own 100% of it. Some of the lots belong to individual owners. So it will be difficult to manage as some owners may not want to sell,” the source says.

Island Plaza land area is less than one acre, another Penang source says.

There are two other malls within less than a mile of it, Straits Quay and a mall owned by the Boon Siew Group.

Executive director Chan Lai Hing of AsiaMalls Sdn Bhd, which is managing the assets for sale on behalf of PGIM, did not respond to phone calls nor emails about its plans to sell Setapak Central Mall, Island Plaza and Seremban Prima.

Even as the ARA Group increases its geographical reach and offerings, in the near term, the group continues to see opportunities here, Lim says.

ARA’s buying spree was between 2010 and 2012. It enhanced its properties soon after.

Late last year, it was reported that the ARA group was planning to list a real estate investment trust (REIT) on Bursa Malaysia.

Five Malaysian assets, excluding the potential purchase of Setapak Central, valued at RM1.85 bil were set to be injected into the mall-based REIT.

In Singapore, the group went for a delisting instead last year.

It was reported that the group is seeking to be a global powerhouse on the world’s stage and has set its eyes on the United States and Europe.

It has also set up the ARA Infrastructure this year to ride on the rising demand among investors in this asset class as the search for yield continues.

Delisting in one market and listing in another is nothing out of the ordinary.

If it lists in Malaysia, it will be able to access the country’s capital markets and at the same time recycle its capital for other investments.

So a REIT is an exit option. It could do that, or sell to other funds or owners. 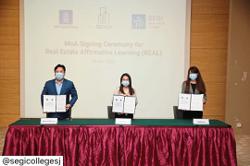