Out of these, about 13 will be drive-through stores, two reserved stores and the rest will be core stores.

As of now, there are a total of 39 drive-through stores, seven reserved stores and over 200 core stores.

“We are positive on this as the drive-through stores rake in the highest margin, followed by the core store and the reserved store,” said AmInvestment Bank.

Starbucks Malaysia makes up circa 79% of total revenue.

Coffee beans account for some 8% of Starbucks’ total cost of sales.

Coffee bean prices have been falling since the second quarter of 2018 though these were slightly offset by the weakening ringgit against the US dollar.

The research house’s sensitivity analysis suggests that a 5% decline in the price of coffee beans will improve Starbuck’s profit before tax (PBT) margin by 0.2 percentage points, resulting in a 2% increase in PBT.

“In FY19, we expect Starbucks’ same-store sales growth to continue at circa 1.9% and we estimate a 14% rise in Starbuck’s gross profit,” said AmInvestment Bank.

The group closed down 3 KRR restaurants in the first quarter of financial year 2019 (FY19) but plans to open two new KRR restaurants and four KRR express outlets in FY19.

Berjaya Food has also revamped the management of KRR to improve internal efficiencies to facilitate its turnaround.

“Moving forward, we expect KRR’s loss before tax to be narrowed to RM1.8mil, as compared to a loss of RM6.7mil in FY18,” said AmInvestment Bank.

The research house is “neutral” on Berjaya Food following a meeting with its management.

While it is positive on the growth of Starbucks Malaysia and the expansion plans that are slated for Berjaya Food’s segments, AmInvestment Bank is wary of its ability to turn around loss-making segments, which have weighed down earnings in recent years. YEE Lee announced that it had acquired 654,800 shares in Spritzer for a total consideration of RM1.54mil.

This represents a 0.3% increase in Yee Lee’s stake in Spritzer to 29.19% upon completion.

The shares were acquired at RM2.35 per share through an off-market transaction with Datuk Lim Kok Boon, a director and shareholder of Spritzer.

He is also a brother of Datuk Lim A Heng @ Lim Kok Cheong, the non-independent executive chairman of Yee Lee.

PublicInvest Research deems the price reasonable, representing a 0.4% premium to the share’s five-day volume weighted average price of RM2.34 up until Aug 29, 2018.

“Based on our estimation, this would have a minimal impact to earnings forecast at 0.1%, with marginal 0.4% (RM0.01 in value) positive increase to our target price.

“Thus, we keep our earnings estimates unchanged at this juncture.

“We are ‘positive’ over the shares acquisition, as Yee Lee’s position in Spritzer has been beneficial to the group.

“This is reflected in the growing profit contributions and long-standing compatibility in their trading relationship,” said PublicInvest Research.

Apart from owning a stake in Spritzer, Yee Lee is also a distributor of Spritzer’s products.

Spritzer is currently the largest bottled water producer in Malaysia with about 40% market share.

Going forward, Spritzer is building a new automated warehouse in its Taiping plant.

With an allocation of RM45mil, the automated warehouse is expected to accommodate higher volume of production and sales when it is completed, targeted by end-2019.

On top of enhancing production capability and capacity, Spritzer will continue to focus on its advertising and promotional efforts to drive sales of bottled water products in both Malaysia and Guangzhou, China.

Its business remains domestic-driven, with export sales making up less than 10% of Spritzer’s revenue.

“Our ‘outperform’ rating is maintained with target price of RM2.58 unchanged, premised on FY19 sum-of-parts valuation. 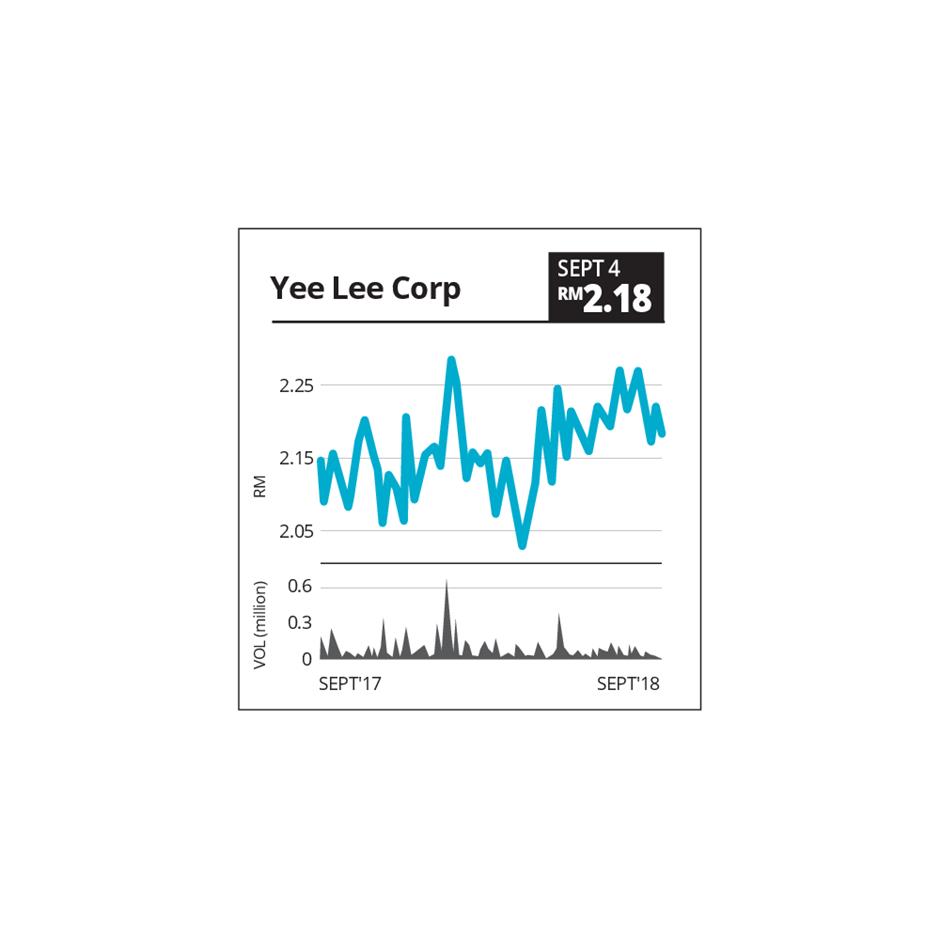 The research house is still concerned about the risk of a potential further increase in its gross impaired loan (GIL) ratio, including rescheduled and restructured (R&R) loans in the coming quarters, in line with the industry’s trend.

The bank explained that 23.3% of its GIL at end-June comprised R&R loans, which are loans that have yet to be defaulted but are impaired due to restructuring.

Affin Bank is guiding for a gross credit charge-off rate (GCCOR) of 30 to 40 basis points in FY18.

“To achieve this, we think the bank’s assumptions for the second half are that there will be no chunky provisioning for corporate loans, and there will be write-backs on some of the R&R loans.

“However, we are more pessimistic and project a GCCOR of 52 basis points for Affin in FY18, premised on our expectation for a rise in the industry’s GIL ratio,” said CIMB Research.

Affin Bank is targeting for loan growth of 6% to 7% for FY18, above the research house’s projected rate of 5.9%, which CIMB Research believes the bank can achieve even if a slowdown in the industry’s loan growth in the fourth quarter of 2018 is taken into consideration.

This is because the bank recorded strong loan growth momentum of 3.8% in the first half of 2018.

The research house also thinks that FY18 loan growth will remain supported by the expansion in residential mortgages while the bank is also pushing for more SME loans.

“We retain our ‘hold’ call on Affin as we are wary about the possible rise in GIL ratio in the coming quarters, in line with the industry’s trend.

“However, its valuations are attractive as FY19 price-earnings ratio of 7.9 times and price-to-book value of 0.5 times are one of the lowest in the sector.

“The upside/downside risks to our call are a pick-up or slowdown in loan and fee income growth. 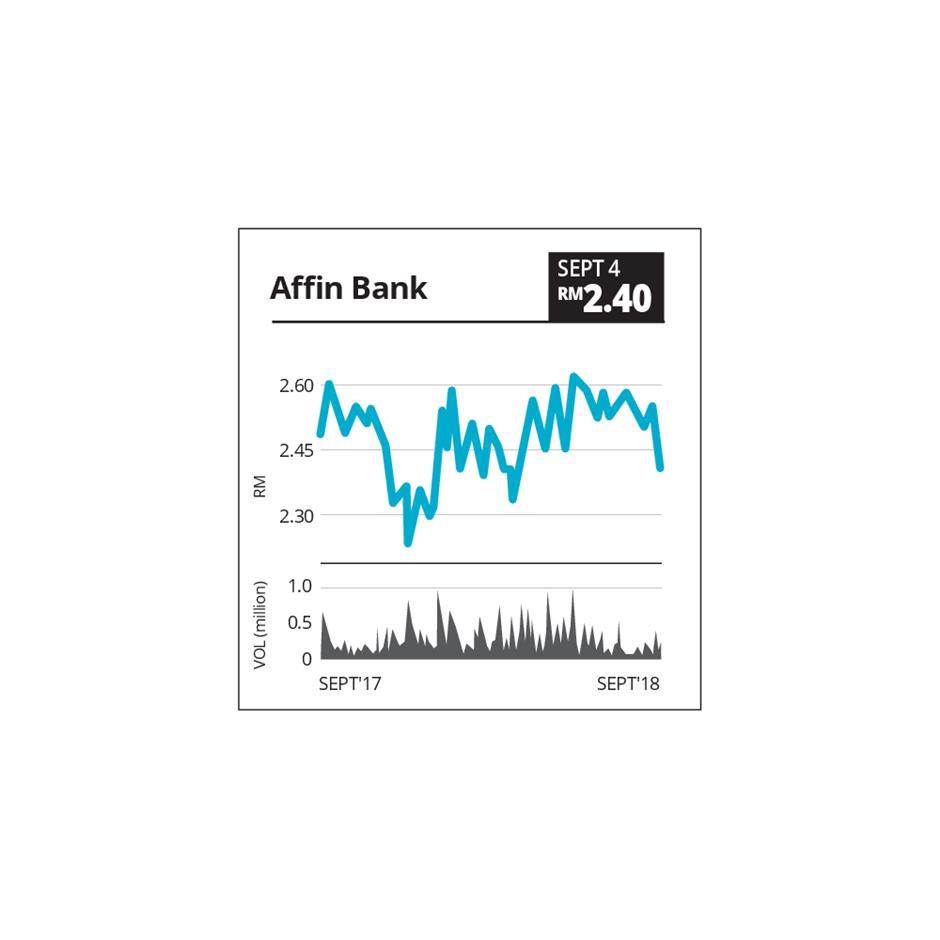 This is due to low crude palm oil (CPO) price and its turnaround strategy may take time to see results.

Effectively, the FFB growth target is now lowered to 9% from 13%.

Other targets for FY18 include an oil extraction rate (OER) of 20.5%, CPO production of 3 million tonnes, and CPO production cost of RM1,600 per tonne.

In the second quarter of FY18, FGV’s plantation division was in loss before tax and zakat of RM6mil, as compared to the first quarter’s profit before zakat and tax of RM18mil.

“We maintain our assumption of core net loss of RM72.7mil for FY18. “Things should improve in FY19 with expected FFB volume recovery. We maintain ‘neutral’ with target price of RM1.54, based on price-to-book value of one time.”