A view of the The Exchange 106 currently under construction in Kuala Lumpur on June 3, 2018. - Reuters

Speaking to the media on Thursday, Lim said the Cabinet has decided to continue the project to recoup all misappropriated funds, repay all borrowings, recover all funding investments and opportunity costs.

Lim also said that the TRX project may make a small profit return, upon completion.

"Yesterday, the Cabinet has met and decided the TRX project shall be completed, with government funding up to RM2.8bil", he said. This was to ensure completion of TRX to a avoid a RM3.51bil compensation.

Lim also added the RM2.8bil ceiling cap amount will be valid until 2024.

“More than RM3bil was misappropriated by 1MDB from the TRX project,” he said. “1MDB had used TRX funds for its loan repayment.”

Below is the statement read out by Lim Guan Eng:

The TRX project will be completed despite more than RM 3 billion of government funds misappropriated from TRX City Sdn Bhd by 1MDB.

The Malaysian Cabinet has decided to support the TRX project to recoup all misappropriated funds, repay all borrowings, recover all funding investments and opportunity costs as well as potentially achieve a small surplus return.

TRXC was transferred to MoF on 31 Mar 2017, as advised by the Parliamentary Public Accounts Committee, because TRXC was unable to secure land sales or bank financing, due to its association with 1MDB.

To recap, TRXC is the owner of the 2 key real estate projects under the 1MDB umbrella, comprising the 70-acre Tun Razak Exchange (TRX) and the 486-acre Bandar Malaysia development in Kuala Lumpur.

Since 2012, the Federal Government has guaranteed borrowings, extended advances and provided transfers to as well as purchased land from TRXC amounting to RM3,688 million.

Of this RM 3,688 million of transfers, a total of RM 3,067 million were misappropriated by 1MDB, mainly for 1MDB loan repayments.

As a result of the misappropriation of funds, TRXC does not have enough money to fulfil its obligations as the Master Developer for TRX.

To-date, TRX City has sold parcels of land to local and foreign investors such as Mulia Property Development, HSBC, Affin Bank, Lembaga Tabung Haji, WCT and IJM(whose building would be tenanted by Prudential).

The Mulia’s Exchange 106 Tower and the Prudential building are expected to be ready by early next year.

The alternative of not coming up with a funding of RM2.8 billion and not completing the project, is to pay RM3.51 billion of ringgit in compensation claims, as well as an eyesore of an abandoned mega-project in the heart of Kuala Lumpur.

In that event, apart from having to pay compensation of RM3.51 billion, the Government will also lose the RM3.7 billion transferred earlier to TRXC.

Yesterday, the Cabinet has met and decided the TRX project shall be completed, with government funding of up to RM 2.8 billion. This decision will help allay concerns amongst the local and foreign investors, who have put in billions of ringgit, on the fate of TRXC.

Injecting the additional RM2.8 billion, on top of the RM3.7 billion transferred earlier to TRXC, would make up total funding by the government to be RM6.5 billion.

Completing TRX will allow the full value of the project of at least RM7.6 billion to be realised.

This will help to recoup and repay the TRXC borrowings, including the sums misappropriated by 1MDB, recover all funding investments and opportunity costs as well as potentially achieve a small surplus return.

I have instructed the management of TRXC, represented here by its CEO, Dato’ Haji Azmar Talib and Executive Director, Tan Hwa Min to lodge a report with the investigative panel of 1MDB and the police on the RM 3 billion misappropriated funds by 1MDB.

MoF will ensure that the injection of funds is spent prudently to protect the interest of Malaysian tax-payers, the existing foreign and local investors of TRXC. 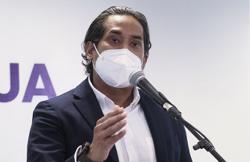