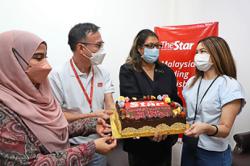 will cease its printing operations at its Bayan Lepas facility in Penang effective September 2018.

It said this was part of its ongoing cost-rationalisation exercise.

The decision is also part of the company’s transformation drive towards digitalisation and making Star Media Group more agile and lean.

The transformation will help Star Media Group take better advantage of the opportunities in the media space, it added.

In its statement, the company said this was in line with its efforts to centralise the nationwide printing of the country’s No 1 English newspaper at its printing facility in Shah Alam.

The move is expected to bring about a reduction in its overall operating cost, and as a result, about 100 employees in its Penang printing operations are expected to be retrenched.

The group does not expect any significant adverse impact on its newspaper circulation in the northern region as a result of this exercise.

It will also not affect the delivery of the newspapers to the northern region, especially Penang.

“The northern edition, with its emphasis on Penang news, will remain.

“We will continue to ensure the demands of our readers in Penang are met,” it said.

Last week, Star Media Group announced that improved operations and continued cost-management measures saw its profit before tax come in higher by 173% to RM17.59mil for the first quarter of 2018.