PETALING JAYA: With the Government expected to make announcements on changes to toll charges on expressways, attention will be focused on the impact this may have on concessionaires and the national finances.

While it remains unclear whether the new administration plans to remove toll charges entirely, ending tolls in stages or to pursue a toll rate restructuring will have some impact on concessionaires, bond holders and the government’s own purse strings.

Pakatan Harapan promised to abolish toll collection in its 14th general election manifesto. However, a complete abolition will likely see the federal government undertake significant burden on its fiscal spending.

Speaking to the media yesterday, Tan Sri Zeti Akhtar Aziz, who is part of the five-member Team of Eminent Persons, said that Tun Daim Zainuddin would likely announce the decision on toll charges as early as next week.

In order to nationalise and subsequently end toll charges in Malaysia, the government will have to defray the costs related to the takeover of the expressways’ assets. In addition, the government will also have to assume the debt obligations of the toll concessionaires.

In a 2010 study by the Performance Management and Delivery Unit (Pemandu), it was revealed that the overall cost to acquire all highways in the country was about RM383.3bil. However, as noted by CIMB Research, Pakatan Harapan had earlier estimated that the takeover of all highways via the expropriation clause would only cost the government about RM50bil.

The latest cost to take over all the highways is unknown. While the removal of toll charges will likely benefit road users and relieve pressure from the rising cost of living, critics believe the move could strain the federal coffers if the toll charge removal is not substituted with other sustainable revenue streams.

According to the Bond Price Agency Malaysia’s figures as at April 23, there was a total of RM55.3bil of outstanding bonds from various toll concessionaires within Malaysia.

This means the government would have to pay over RM55bil just to take over the debts of the toll concessionaires in the event of a complete acquisition of toll operators in the country - aside from the cost to acquire the assets.

In a separate report, Maybank Investment Bank Research pointed out that the government would have to pay about RM79bil in compensation, at the most minimal, to acquire all outstanding debt and shareholders’ equity. This is assuming a general 70:30 debt-to-equity ratio. 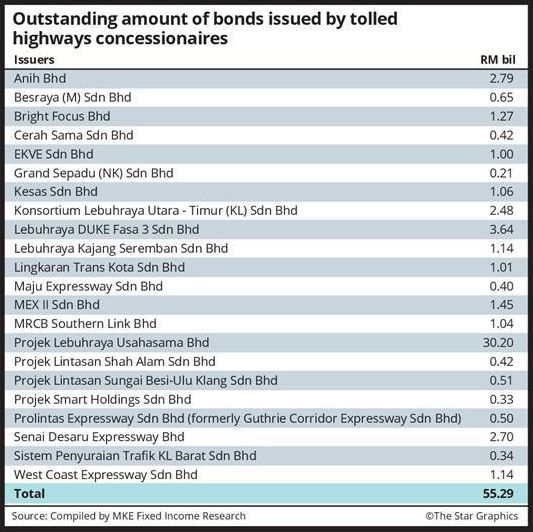 “We have to be mindful that a lot of money was invested through the capital markets and there is a need for some balance in this situation,” he said.

Former Deputy Works Minister Datuk Rosnah Abdul Rashid Shirlin said at the Dewan Rakyat earlier this year that there were 31 tolled expressways in Malaysia as at end of 2017.

The country’s toll concessionaires will likely be watching the developments related to toll charges closely.

Apart from these public-listed companies, the country’s sovereign wealth fund Khazanah Nasional and the Employees Provident Fund (EPF) are also involved in the toll concession business. Khazanah and the EPF are the shareholders of Projek Lebuhraya Usahasama Bhd (PLUS), the owner of five major highways, including the North-South Expressway.

Most of the major tolled highways in the country are owned by PLUS and Prolintas.

RHB Research Institute said the impact from the abolition of tolls in Malaysia would be largely neutral on the toll concessionaire stocks, provided that fair compensation is given. “The abolition of toll charges could result in a one-off cash injection, following the disposal of toll concession assets which comes at the expense of earnings from the collection of tolls. The proceeds, which could be used to pare down debts, may just give rise to special dividends to shareholders,” said the research firm.

Meanwhile, PublicInvest Research said that the acquisition of concessionaries with the aim of abolishing toll collections would be protracted. “With issues of compensation certain to be a sticking point, it may cloud sentiment on listed players like Gamuda, IJM Corp, Taliworks and Litrak, which own more than one concession, alongside Ekovest and Bina Puri which only have one each,” it said.