PETALING JAYA: Robert Kuok has once again topped the Forbes 2018 Malaysia Rich List with his wealth soaring by US$3.4bil to US$14.8bil from US$11.4bil a year ago.

Several other Malaysian tycoons saw their overall fortunes soaring, which was led by a 6.6% rise in the Kuala Lumpur Composite Index over the past year and a 13.1% appreciation in the ringgit’s value against the US dollar. Forbes said 34 listees saw their wealth increase, while only six experienced a decline.

Forbes set the minimum net worth to make the list this year at US$300mil, up from US$210mil.

Quek has substantial stakes in arguably the most number of listed companies, with 16 spread through jurisdictions in Malaysia, Singapore and Hong Kong, while Ananda holds stakes in Maxis Bhd

. However, in India, his majority owned-Aircel is filing for bankruptcy protection against its creditors.

A notable change in fortunes was recorded by gaming tycoon Tan Sri Chen Lip Keong, who added US$1.7bil to his fortune, doubling it to US$3.3bil.

This was led by the rising tide of tourists to Cambodia, the country’s low labour costs and Chen’s tight controls on capital expenditure.

Chen, a medical doctor by training, made his fortune through the gaming and tourism business. He is chief executive and majority shareholder of NagaCorp holding a 65.4% stake, Karambunai Corp Bhd

(82.9%). NagaCorp is the largest hotel, gaming and leisure operator in Cambodia.

Aluminium Holdings Bhd at No 8, with a combined wealth of US$3bil, are the year’s biggest percentage gainers with a 186% jump from US$1.05bil in the previous year. 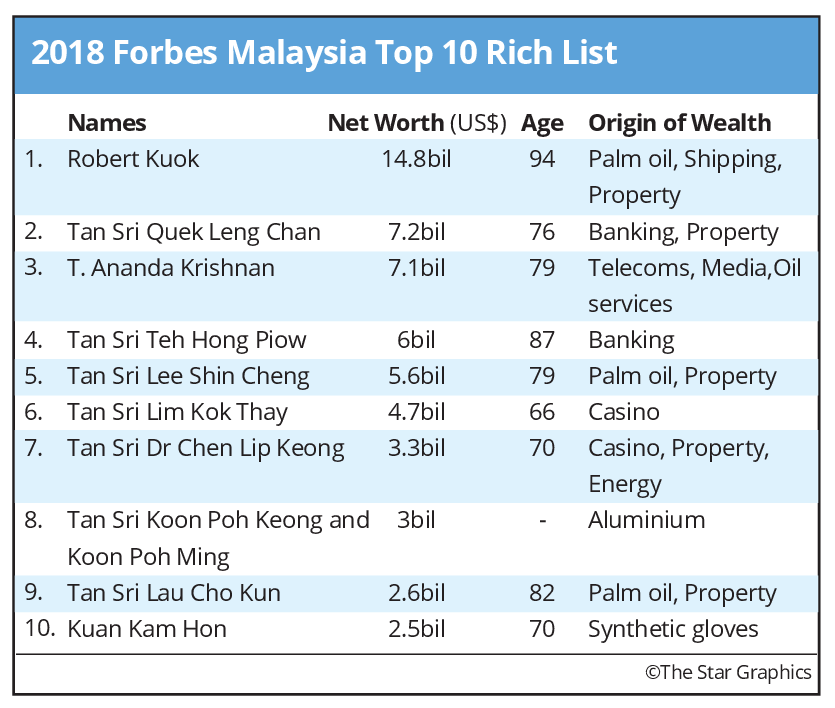 A cutback in aluminium smelting in China for environmental reasons boosted demand for the aluminium produced by Press Metal and it was Poh Keong who came up with the idea for the company and owns 80% of the US$3bil wealth. That makes him a new billionaire in his own right.

The other notable gainers whose net worth more than doubled were AirAsia Group co-founders, Tan Sri Tony Fernandes (No. 30, US$745mil) and Datuk Kamarudin Meranun (No. 31, US$735mil).

Among the eight newcomers this year were Padini Holdings Bhd

managing director Yong Pang Chaun (No. 39, US$430mil), and the only woman to make it to the list this year Datuk Norraesah Mohamad (No. 49, US$305mil), the executive chairman of MyEG Services Bhd.

The youngest tycoon on the list is GrabCar co-founder Anthony Tan with US$300mil in wealth.

, who passed away last October at the age of 87.

Francis has been running the family’s property, manufacturing and utilities conglomerate for more than two decades.