THE expression of interest from two powerful groups vying for the role of project delivery partner (PDP) for the ambitious Kuala Lumpur-Singapore high-speed rail (HSR) project should bode well for all stakeholders.

The fact that it is being done via an open tender is a positive sign for the industry, and the intense competition is expected to bring out the best from the companies vying for the job.

The company offering the best pricing and best terms for the job will eventually bag the coveted contract and this will also be good for the perception and image of the mega project.

The responsibility of the PDP is essentially to deliver the civil construction works of the project on time and within cost.

Prior to this, most of the previous major railway projects in the country had seen the PDP role awarded via direct negotiation, apart from the LRT3 project.

Looking back at the previous mega railway projects in the country, the PDP for the MRT1 and MRT2 projects, MMC-Gamuda, was appointed via direct negotiation.

For the MRT3 project, however, it was announced that Mass Rapid Transit Corp Sdn Bhd (MRT Corp) decided to go with a “build and finance” method by a turnkey contractor instead of the PDP model. 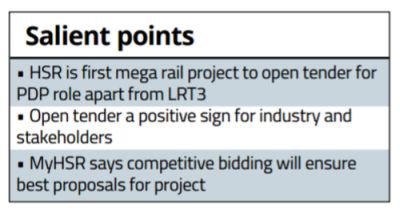 The PDP for the Sabah and Sarawak portions of the Pan Borneo Highway project are also believed to have been selected via direct negotiation as there were no reports of an open tender prior to the signing of the PDP agreements.

The Government’s project delivery vehicle for the HSR project, MyHSR Corp Sdn Bhd, tells Star Bizweek that the competitive bidding approach would allow the most qualified local and foreign experts to come up with the best proposals for the project.

“Echoing the previous successes of competitive open tenders and the commitment for fair and transparent procurement, MyHSR Corp believes that the procurement approach adopted will allow for both local and foreign experts to work together to provide us with the best proposal for the iconic KL-SG HSR project.

“This will allow for the further development of local talents and expertise, while supporting and catalysing the development of the local industries,” it says.

The company adds that the HSR project will also provide the the opportunity to improve the local industry’s capabilities via the exposure to the development and the construction of a high-speed rail mega project.

In terms of the selection criteria for the PDP, MyHSR says the PDP will need to demonstrate their technical capabilities and experience as well as to provide a value-for- money proposal.

As the submission deadline is Jan 30, 2018, MyHSR is targeting for the award of PDP job to be done by the second quarter of next year. So far, the two consortiums that have announced that they will be bidding for the job involve heavyweights in the construction industry, with strong experience in previous mega infrastructure projects.

On one side is the consortium of IJM Corp Bhd

(SunCon), which teamed up with two influential firms from Sarawak to bid for the job.

IJM Corp told the stock exchange on Monday that its unit IJM Construction Sdn Bhd had entered into a pre-bid agreement with Jalinan Rejang Sdn Bhd, Maltimur Resources Sdn Bhd and Sunway Construction Sdn Bhd to work exclusively with each other in the tender for the HSR project.

It said the parties had set up a consortium on a 25:25:25:25 basis known as the IJM Construction Sdn Bhd-Jalinan Rejang Sdn Bhd-Maltimur Resources Sdn Bhd-Sunway Construction Sdn Bhd Consortium for the submission of the tender and, if the bid is successful, to undertake the project.

IJM and Sunway Construction are big names in the industry, with outstanding orderbooks of above RM9bil and RM6.8bil respectively as of November 2017.

The other two players in the consortium, Maltimur Resources and Jalinan Rejang, are the two companies that form the PDP for the Sarawak portion of the Pan Borneo Highway.

Their joint venture company Lebuhraya Borneo Utara Sdn Bhd (LBU) was awarded the job in mid-2015 and is responsible for supervising and managing construction works of the 1,090-km long toll-free stretch of the Sarawak side.

Maltimur Resources, which holds a 55% equity interest in LBU, is a company linked to Tan Sri Bustari Yusof, a corporate figure from Sarawak who is also the brother of Works Minister Datuk Fadhilah Yusof.

Jalinan Rejang, on the other hand, is a unit of Rafulin Holdings Sdn Bhd, which is linked to Datuk Mohamed Raffe Chekku and his wife who are both directors of the company.

According to previous reports, KLSEB, is a subsidiary of Bina Puri Holdings Bhd

The company has a 40-year concession on the Latar Expressway.

and Malaysian Resources Corp Bhd. Gamuda is seen as a lead contender due to its experience as PDP for the mass rapid transit (MRT) project while MRCB is a member of the PDP joint-venture (JV) undertaking the light rail transit 3 (LRT3) job.

The PDP job involves building culverts, bridges, tunnels and other infrastructure on the Malaysian side of the HSR railway project.

The KL-Singapore HSR project is undoubtedly shaking things up by opening competitive bidding that will hopefully set a precedent for other upcoming mega projects.

Not only does it allow transparency in the selection of the PDP and a fair chance for all players to complete, in the end the people and the country stand to benefit.

A fair and level playing ground will ensure the highest efficiency in the usage of public funds as well as the highest quality infrastructure as the end product for consumers.