Will robots and artificial intelligence take your job?

“THEY took our jobs!” say the rednecks in South Park whenever someone “steals” their jobs.

But rather than losing your jobs to immigrants, as the rednecks in South Park belief, the more plausible and larger threat to your employment comes from robots and artificial intelligence (AI).

This trend has not the smallest minds worried. Bill Gates proposes to tax robots which take over people’s jobs to fund government spending.

This sounds like a bad idea: taxing investments which improve productivity ultimately benefits society as a whole.

Yet the sentiment is understandable, especially as the gains of automation are unlikely to be spread fairly among the population.

According to a survey of 352 AI researchers, AI will outperform all human tasks in 45 years. Complete automation of all human jobs will still take 120 years though.

Even a hamburger flipper or taxi driver may no longer be safe: advancements in motion control and sensor technology will greatly improve robotic movements and coordination.

Should we fear robots and artificial intelligence, or welcome them?

On one hand, nobody regrets that the days of ploughing the land by hand or mining the earth with a pick are gone.

Much manual labour is physically exhausting, unhealthy and dangerous and we should not long back to those days out of misplaced nostalgia.

We also don’t want to come across as change resistant, like the Luddite’s, the textile workers who smashed weaving machinery at the start of the Industrial Revolution in the UK as they (rightfully) feared for their jobs.

As jobs are destroyed, better ones are created. The development of weaving machines created new jobs: as those machines needed to be designed, built, sold, transported, maintained and operated.

On the other hand, experts argue that the current wave of automation – both robots and artificial intelligence – is somehow different.

The jobs that are being replaced by robots and AI are typically very different from the ones that are needed to build and run the machines and software. It won’t be easy to upskill a taxi driver to become a GRAB software engineer.

And there are many more taxi drivers that would lose their jobs when cars become driverless, then software engineers needed for an app.

Mass-employment might not be as bad as it sounds though. Many visionaries foresee a future in which people would only have to work a few hours a week and spend the rest of their free time in leisurely pursuits.

Since the majority of the benefits from automation and artificial intelligence will fall to a few entrepreneurs and companies, massive income redistribution (or the idea of a universal basic income) would be required for this vision to be realised without greater inequality.

It seems that blue-collar workers should be more afraid of robots, although they are somewhat protected by the fact that labour is too cheap to be taken over by expensive machines.

Even that certainty is disappearing, however, with the emergence of driverless cars for example.

If you have to make sizeable investments, you want to reduce the most expensive type of labour you can, which is why artificial intelligence is a much higher risk (for the first time in history) for the middle-class.

Personally, I believe much of the groundwork that junior lawyers, accountants, (tax) consultants, journalists and other (junior) white-collar workers currently do will be performed quicker, better and cheaper by artificial intelligence within the next five to 10 years.

Luckily, there are also things that robots and AI can’t do very well. It (for now) has trouble connecting with people’s emotions which is essential in education, healthcare and sales. Also, jobs with a high degree of uncertainty, complexity or risk-taking are harder to automate.

And of course, engineers are still needed to continually improve the hardware and software of robots and AI.

However, school is probably preparing you for jobs that will either not exist by the time you graduate or that will look very different.

Don’t look to the government to protect you. Rather attempt to re-train yourself and don’t expect to ever be done with learning.

Nor should you expect to do the same thing your whole life. Exciting times are ahead!

Mark Reijman is co-founder and managing director of https://www.comparehero.my/ dedicated to increasing financial literacy and to help you save time and money by comparing all credit cards, personal loans and broadband plans in Malaysia. 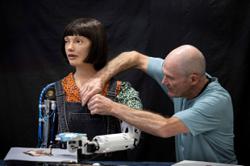