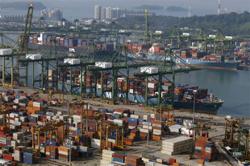 ’s indirect unit Sime Darby Engineering Sdn Bhd (SDE), which is no longer targeted by former consortium partner Swiber Offshore Construction Pte Ltd for an arbitration, has teamed up with the Singapore-based offshore construction services provider to make a claim against Oil & Natural Gas Corp Ltd (ONGC), for whom they executed a process platform job for US$618.4mil (RM2.53bil) six years ago.

Sime Darby told Bursa Malaysia that SDE and Swiber had on Wednesday last week issued a notice invoking arbitration to ONGC to refer the disputes and differences on the consortium’s claim against the Indian multinational oil and gas company.

The amount of claim sought and the reason for the claim are not mentioned in Sime Darby’s announcement. The contract for the process platform for ONGC’s B-193 field development work in India was awarded in August 2010, according to the Sime Darby announcement.

SDE and Swiber had in January 2010 entered into the consortium agreement to govern their relationship as a consortium with regard to the execution and performance of the contract awarded for the process platform project. In March 2013 Swiber sought a claim against SDE through a notice of arbitration but withdrew the notice of arbitration five months later.