will double the capital investment under the Genting Integrated Tourism Plan (GITP), which involves redeveloping and transforming Resorts World Genting, from the earlier-announced RM5bil to an estimated RM10.38bil.

The company said in a press statement that it would significantly expand and add new facilities under the 10-year GITP launched in December 2013.

It said it would offer “an extensive and wide array of new and exciting entertainment options, unique to visitors from across the region.”

The capital investment under Phase 1 of the GITP will increase from RM4bil to RM8.11bil, with total investment in the Twentieth Century Fox World theme park expected to exceed RM2bil.

This phase also will see the indoor theme park undergo a major transformation, offering a total of 18 rides from the existing nine.

Genting said the expansion plans also included a substantial increase in staff accommodation to cater for an additional 7,000 new job opportunities at the resort as well as new power sub-stations and water treatment plants to cater for future growth demands.

Phase 2, estimated to cost over RM2bil, will see the construction of more luxury hotels at the resort as well as a show arena with a seating capacity of up to 10,000.

Genting said the construction and development works for GITP were progressing well. Its first offering, the new 1,300-room First World Hotel Tower 3, has been fully operational since June last year.

In a separate development, Genting Malaysia announced to Bursa Malaysia that its earnings for the financial year ended Dec 31, 2015, rose 5.8% to RM1.26bil on a 2% higher revenue of RM8.4bil.

For the fourth quarter (Q4), its pre-tax profit was 2.9% lower at RM357.8mil due partly to foreign exchange losses on the group’s US-dollar denominated assets as well as higher depreciation and amortisation charges.

, which owns just under 50% in Genting Malaysia Bhd, reported a 23.8% rise in profit attributable to equity holders to RM338.9mil for the fourth quarter. 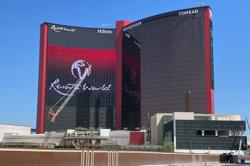