Mah Sing set to launch projects worth RM1.2bil in 2016 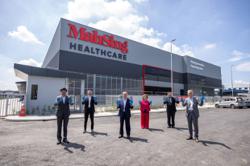 is set to launch over RM1.2bil worth of projects in Penang next year.
Mah Sing (North) senior general manager Daniel Law Wei Keong said the upcoming launches include the RM735mil Ferringhi Residence 2, the RM350mil Icon Residence at Lebuh Pykett, and an unnamed RM150mil project in Southbay City, Batu Maung.
He said the group also expected the Penang properties to contribute between 10% to 12% to the group’s total sales for the 2015 fiscal year ending Dec 31.
“We still have about RM2.8bil worth in remaining gross development value and RM300mil in unbilled sales on the 33ha land bank in Penang,” he told reporters after the exclusive preview of the Ferringhi Residence 2 on Thursday.
He said the group had launched RM2bil worth of housing projects nationwide in 2015 with 84% of the units costing below RM1mil and the remaining 16% priced from RM1mil onwards.
The Ferringhi Residence 2 project, comprising three blocks of 632  resort-style units, would be launched in the first quarter of 2016, he said.
“With built-ups from 1,208 sq ft to 2,910 sq ft and priced from RM775,265, we strive to live up to our brand’s promise, which is to build a premier lifestyle,” he said.
He said the group would also introduce a RM150mil shopping mall in Southbay City, which is expected to begin operations in mid-2016.
“It will have 84 retail lots, which are all sold out, priced between RM1 million to RM2mil depending on the size,” he said.
Law said units in the unnamed project, with a built-up area of 750 to 1,000 sq ft, would cost below RM680 per sq ft. - Bernama
Article type: metered
User Type: anonymous web
User Status:
Campaign ID: 46
Cxense type: free
User access status: 3