Listed timber firms not affected by crackdown in Sarawak PETALING JAYA: Timber companies listed on Bursa Malaysia have come out to say that their operations are not affected by one of the biggest clampdowns on illegal logging activities in Sarawak.

More than 500 bank accounts totalling RM700mil have been frozen since the start of Ops Gergaji from May 12.

In a recent statement, Sarawak Timber Industry Development Corp said the total export value of logs and timber products decreased by 7% to RM1.65bil for the first quarter compared with the same period last year.

AmResearch had downgraded the sector to “neutral” but opined that Jaya Tiasa and Ta Ann were not affected by the probe.

In a March interview with StarBiz, Jaya Tiasa senior manager (sales and marketing) Woung Lik Chiong said timber supply from Sarawak might be halved as a result of the government crackdown. Large quantities had been confiscated since the third quarter last year.

AmResearch pointed out that a short-term pain was likely for the players due to stricter enforcement of regulations, including the new marking requirements at harvest points.

However, the real negative impact on Jaya Tiasa and Ta Ann is still unclear.

To recap, the recent move by the Malaysian Anti-Corruption Commission (MACC) to raid some 50 companies across 49 locations in Sarawak was one of the biggest and most extensive.

Among others, 27 sawmills were raided. Up to 14 people were called up to assist in MACC’s investigations.

, in separate filings with Bursa, said they “are not affected by MACC’s ongoing investigations into illegal logging activities in Sarawak”.

In Ta Ann’s announcement, it said that alongside two of its subsidiaries Ta Ann Plywood Sdn Bhd and Lik Shen Sawmill Sdn Bhd, it was fully cooperative with the MACC.

“It has been the policy of Ta Ann to use only legal logs for timber processing at the group’s plywood mill and sawmill.

“In 2014, Ta Ann had engaged an independent international third party SGS (M) Sdn Bhd for forest sector monitoring, to verify the legality and sustainability of our raw material input,” the company said.

The clampdown on illegal logging activities in Sarawak might also indicate a strong political undercurrent.

An industry observer said the move was “unprecedented”.

“It’s never happened before. The operations have shaken up industry players all across. Even before the report was out, many plywood mills have closed.”

Due to stricter logging rules over the years, many of the listed companies have since diversified into other businesses such as oil palm plantation and tree cultivation.

Some observers reckoned that a reduction in supply following the raids would result in higher prices.

Selling prices of logs have gone up steadily. Last year, Ta Ann’s average log selling price jumped 16% while WTK saw a 14% increase. Volume has also gone up by 19% and 12.5% compared to 2013 for the two companies.

Some observers said that the accounts frozen were a fraction of the industry’s value.

Sarawak is also a high-quality timber exporter in the world. 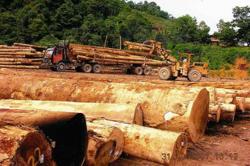