SAM plans to grow via additional investments and acquisitions (M) Bhd, which specialises in producing component parts for airline companies such as Airbus and Boeing, is looking at organic expansion as well as through acquisitions.

The group with backlog orders of RM2bil that will keep it busy until 2020 has set aside RM200mil to invest in its operations in Malaysia over the next two years.

Group managing director Jeffery Goh Wee Keng told StarBiz the expansion would be in line with its plan to position the group as a global player in the aerospace industry.

“We plan to be a global player with a presence in the US and Europe in five years, with an annual turnover of more than RM1bil.

“We are already on track to achieve our RM1bil turnover target in two to three years, which will position our group as a leading player in Asia-Pacific,” he said.

To further beef up the group’s goal to be a global player in the aerospace industry, Goh said SAM would pursue acquisition plans.

“We are looking to take over aerospace manufacturing companies making wing and structural components for aircraft.

“We currently specialise in manufacturing aerospace engine casing,” he said.

On SAM’s plan for another plant, Goh said the plant could be located anywhere in the country.

“It doesn’t necessarily have to be in Penang, where the current plant is located (in Bayan Lepas),” he added.

The planned RM200mil investment would help SAM cope with its current order book of RM2bil and also to cement the company’s position as a leading component supplier of aircraft parts beyond 2020.

“This will take our business beyond 2020. The RM200mil will add more manufacturing space for the group to cater to new aerospace component orders,” he said.

Goh said that in two years, the group’s aerospace business would generate more than 70% of its revenue, compared to 63% now.

“Our aim is to grow the aerospace contribution to 80% of the group’s revenue,” he said.

SAM’s other business is in the manufacture of testers for the hard disk drive (HDD) industry and front-end semiconductor manufacturing equipment.

In the group’s 2014 annual report, chairman Loh Chuk Yam said 2013 marked SAM’s semiconductor and electronic dominant business as a stable business model with 63% of its revenue from the less volatile aerospace industry.

To revitalise the engineering know-how of the semiconductor and electronic segment, SAM is now working with its sister company in Germany, esmo AG, to bring the best of German engineering and technologies into the business, according to Loh.

“It has started to bear fruit with orders flowing in,” Loh said.

SAM recently reported a net profit of RM1.57mil in the first quarter to June 30 on the back of RM93.16mil turnover. This was down from RM2.44mil on revenue of RM94.74mil a year ago.

It attributed the lower profit mainly to the unfavourable foreign exchange movement resulting from the weakening of the US dollar. Revenue from the equipment manufacturing and precision engineering segments fell due to the weak HDD industry, which was partially offset by higher revenue from the aerospace segment.

For the financial year ending March 31, 2015, the company expects revenue from the aerospace industry, which accounts for 70% of group revenue, to remain stable. “However, the semiconductor and HDD industries are experiencing a slowdown, and capital expenditure budgets by both the semiconductor and HDD manufacturers are deferred until demand picks up again. Thus our equipment manufacturing and precision engineering business for the remaining quarters will be challenging,” it told Bursa Malaysia.

According to Deloitte in its 2014 Global Aerospace and Defense Industry Outlook report, revenue of the aerospace industry is expected to grow in the 5% range for 2014. 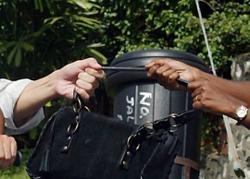