By HANIM ADNAN and DALJIT DHESI

THE ongoing changes in the regulatory landscape of the various sectors of the Indonesian economy will be challenging for foreign investors, including Malaysians, who have poured money into the country over the past 15 years.

In recent years, foreign investors, including Malaysians, have been fidgeting over fresh proposals demanding for policy reforms in the mining, plantation and banking sectors in Indonesia.

While the changes are mainly in the form of tighter business regulations and conditions closely related to resource nationalism, environmental sustainability and socio-political factors, industry players opine that the main thrust is basically to limit foreign investors’ ownership and the sheer size of their ventures in the republic.

There is a precedence of such action by Indonesia. Malaysia Smelting Corp Bhd (MSC) is exiting the tin mining scene on Bangka and Belitung Islands after stringent business conditions were imposed on foreign mining companies.

The world’s second-largest refined tin producer, which owns a 75% stake in PT Koba Tin, Indonesia’s second-biggest tin miner, is divesting its tin mining and smelting assets after more than 10 years operating in the republic.

MSC CEO Chua Cheong Yong tells StarBizWeek that “when we first went into Indonesia (after taking over PT Koba from the Australian operators) in 2002, it was a good investment until the last few years”.

“However, a series of events had overtaken us. PT Koba was facing a lot of unwarranted and unforeseen issues in Indonesia, thus making it difficult for us to continue operating in Indonesia,” he says, adding that MSC hopes to exit from Indonesia by the end of this year.

He says that one lesson learnt is that the phrase “doing business as usual” is no longer acceptable in today’s global resource industries, given the growing need for corporate social responsibility and international concerns and pressures over political, armed conflict, social and environmental issues in the industry.

While MSC may be just one foreign corporate casualty under Indonesia’s new policy reforms, market analysts say that Malaysian-based plantation companies with large-scale oil palm plantations in the republic should also brace themselves for the impact from the new regulations and conditions to be imposed on oil palm planters in the republic. Our lead story this week, Indonesian dream in jeopardy, examines the travails of Malaysian companies in that country following changes to rulings on equity ownership. On Monday, we carry a special interview with Indonesian president-elect Jokowi Widodo (left) by The Star’s managing director and chief executive officer Datuk Seri Wong Chun Wai. Jokowi speaks on a wide range of topics from foreign investments to Indonesia’s new growth areas and trade policies.

Planters in Malaysia took the news of possible changes in ownership and the way things are run in Indonesia with some trepidation.

Last year, a new regulation stipulated that plantation companies or plantation groups of companies with the same management and owner shall have a maximum acreage of 100,000ha in Indonesia.

Both Regulation No. 26/2007 and the revision are based on Law No. 18/2004, which states that the Agriculture Ministry shall stipulate the minimum and maximum acreage that may be granted to a company, while the governmental agency in charge of land affairs shall issue the land titles.

In fact, plantation licences (IUP) will only become effective after receiving recommendations from the Agriculture Ministry. Previously, the IUP was given directly by the region where the plantations operated.

The latest proposals this year that could further affect the expansion of Malaysian-owned plantation companies include:

> Restricting foreign ownership of plantations up to 30% compared with 95% currently.

A new draft Bill is now being drawn up by the Indonesian Parliament. Should the Bill become law, then plantation firms are given five years to comply. Those who refuse to comply may face fines, temporary suspension or revocation of licences. 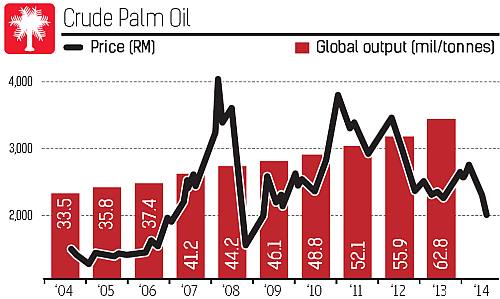 For over two decades, palm oil industry expert M. R. Chandran had said Indonesia had been the “Shangri-La” of Malaysian planters, who are the largest investors of oil palm plantations in the republic.

More than five million ha of oil palm land are said to be held by foreign investors in Indonesia, and they are said to have poured over RM100bil in investments into the sector.

According to market analysts, local plantation companies with more than 50% of planted land bank exposure to Indonesia include IJM Plantations (52%), KLK (53.2%), and Genting Plantations (72%), followed by Sime Darby at about 38%, FGV at 5.9% and IOI Corp at 7.2%.

When contacted by StarBizWeek, many domestic plantation companies with operations in Indonesia were reluctant to comment on the proposed stringent rules and conditions for foreign planters in Indonesia.

One top industry planter with a large exposure to Indonesia says, “These are just proposals and also market talk that have been going around for quite some time. I believe the Indonesian government will be assessing the pros and cons prior to the full implementation.

“Many of the Malaysian plantation companies went to (invest in) Indonesia with eyes wide open and have chosen very good and reliable Indonesian partners. “Personally, I am optimistic of a favourable outcome. I also think the Indonesian government would be more equitable and will not chase away its top foreign investors (in plantations) that would worsen the country’s budget deficit and currency situation.”

To date, there has been no clarity from the central government and respective ministries on the implementation, which many believe was part of the political pressure before the presidential election.

The consensus is that “it is highly unlikely” to go through due to the need for financial assistance and technology by local plantations in Indonesia.

Meanwhile, a Sime Darby spokesperson says Sime Darby Plantations is aware of the possibility that such a Bill may be introduced.

“We are ready to respond to any changes in the competitive and regulatory landscape of the Indonesian plantation industry.

“As far as we are aware, there has been no official communication to the plantation players in Indonesia on the proposed Bill,” adds the spokesperson.

CIMB Research, in its recent note, is also uncertain if the Bill would be passed into law, as some parties are likely to lobby against it.

“Planters we spoke to indicated that they would need greater clarity on the proposal before commenting on how they would proceed, going forward.

“It remains unclear if this ruling will be retrospective, or only affect future new investments,” the research unit adds. However, if the 30% foreign limit is implemented, then CIMB Research says it would negatively impact foreign investment into the palm oil sector in Indonesia.

“We think that the ruling is unlikely to be retrospective because it may affect the Government’s ability to attract new foreign investments into the country. It would also be difficult to implement, given that the existing foreign investment in plantations is sizeable.

Public Investment Bank Bhd says the implementation to limit foreign ownership to 30% in plantations as well as slashing the RBD palm oil export duty by Indonesia could present a double whammy for Malaysian plantation players, apart from the downtrend in crude palm oil prices.

Assuming the new Bill is passed, the research unit says the options for plantation players to cap their stakes to 30% foreign limit include potential listing on the Indonesian stock exchange, disposing stakes to local buyers, realigning their shareholding structure for their Indonesian arm and merging with local plantation players on a share-swap basis.

Setting a precedence in banking

Bankers have been continuously exposed to the changing regulatory climate in Indonesia over the years. The Indonesian Government’s tight grip on foreign ownership of local banks has created further uncertainty among foreign banks, following a recent proposed Bill to cap maximum foreign ownership to 40%.

This has raised jitters, especially among foreign banks operating in South-East Asia’s largest economy, on the direction and future of the Indonesian banking landscape.

A vital component of the Bill, which has caught many foreign lenders by surprise, is Article 116. Although the wording in the proposed draft Bill does not expressly use the term retrospective for the existing foreign ownership cap, there appears to be an implied requirement to do so.

Article 116 states that upon the implementation of the law, every foreign individual and institution, which owns more than a 40% stake in a commercial bank, has to adjust to the new ownership limitation over a period of five to 10 years.

It is learnt that the regulators – the Financial Services Authority (OJK) and Bank Indonesia – are not in favour of imposing the foreign ownership cap on existing banks that own more than a 40% stake in local banks and are in negotiations with the legislators. The issue is still being debated.

Foreign bank branches under the proposed Bill will also be required to be locally incorporated and be subject to the same rules over a time frame of between five and 10 years.

The Bill also, amongst others, allows the foreign ownership cap to be adjusted by OJK through share purchases by considering a few factors like the shareholders’ track records, good governance, capital adequacy and economic contributions.

The move to cap the foreign ownership limit is seen by analysts as having two results – to bolster the merger and acquisition (M&A) activity among local lenders, especially the bigger domestic and state-owned banks to acquire the smaller ones, and protect the banking industry from any future global financial crisis.

According to a CLSA analyst, Jayden Vantarakis, Jakarta’s tough stance on capping the foreign ownership of local banks is because the Government wants consolidation to create two or three large state-owned banks and shrink the number of banks from 120 to 100, moving forward.

Malaysian banks which have subsidiaries in Indonesia are Malayan Banking Bhd (Maybank) and CIMB Group Holdings Bhd. Maybank has an interest of about 80% in PT Bank Internasional Indonesia Tbk (BII), while the CIMB Group owns a 97.9% stake in PT Bank CIMB Niaga Tbk.

Maybank and CIMB are awaiting more clarity on the matter. Vantarakis and some analysts say that if the law is passed, it may be retrospective, while others feel the regulators will not put curbs on existing foreign banks, as this could dampen foreign direct investment into Indonesia.

The law on foreign ownership, some analysts say, could be passed this year or sometime next year, although Vantarakis opines that it will likely be passed between now and October when the new Parliament commences on Oct 1.

Analysts argue that if the new banking law is to be retrospective, then it may, at the same time, be a costly affair if the large domestic banks and state-owned banks are to acquire the assets of foreign lenders in the event there is a selldown of foreign shareholding stakes.

It may also further impose capital strains in view of the Basel III requirements in the event the large domestic banks are to acquire the assets of major foreign banks, an industry observer laments.