has found its way back into the hearts of investors, if its share price performance is anything to go by.

Since the beginning of the year, the stock has appreciated 61% to RM1.69, beating the performance of the benchmark FTSE Bursa Malaysia KLCI (FBM KLCI) which is down in the same period.

Granted, it isn’t the only semiconductor company which is being chased by investors.

Whatever the case, chairman and group managing director John Chia Sin Tet thinks that the interest in Unisem which makes microchips used in electronic products, is well justified.

“The worst is definitely over for us,” says Chia.

“Actually, our Ipoh and Chengdu (China) plants have always been profitable , what brought us down in the past two years were our Wales (UK) and Batam (Indonesia) operations.”

Having completed its group rationalisation process in January which involved closing down its Wales subsidiary and consolidating its Batam operations, Unisem is now focusing on production at the latter as well as at its Ipoh and Chengdu plants.

These three facilities are running at an average of 65% capacity utilisation rate, says Chia who has a 6.3% stake in the Kuala Lumpur-based Unisem.

Besides the three facilities, it also has a test facility in Sunnyvale, US and a wafer bumping facility in Ipoh.

“We did well in the second quarter on an operational basis, for the third quarter of the current financial year ending Dec 31, we hope to be able to register a 5% to 10% growth in our top-line on a sequential basis.” 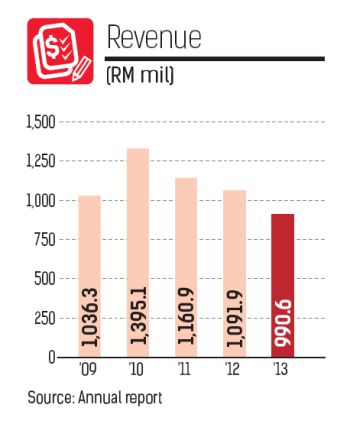 The global semiconductor market is worth more than US$300bil per annum (about RM960bil) and Unisem’s market share remains insignificant at the moment, Chia points out, suggesting there’s a lot of business for it to capture.

Lending further support to Chia’s optimism is the recovery of the US economy which should boost demand for semiconductor products and services, as the US remains one of its main markets.

The trend appears to be ongoing as early last month, the association which tracks the semiconductor industry said the global semiconductor market posted healthy growth throughout all regions in May, boosted by continued strength in the Americas.

Additionally, only this week it announced that global sales surged to the highest ever at US$27.57bil in the month of June.

“Sales are expected to increase for the foreseeable future, ” its president and CEO Brian Toohey has said.

In its latest Annual Report, Unisem notes that “the expected industry trends for 2014 include stabilisation in the PC market, continued strong adoption of tablets and smartphones and the emergence of the new category of wearable devices.”

Getting the house in order

Unisem, once the darling of the stock market, fell out of favour no thanks to the softening of demand for its products as economies globally faltered and consumers bought less of electronics.

It didn’t help that its costs were running high at the same time.

The group then embarked on a rationalisation plan to get things in order and completed that group-wide exercise in January this year.

Chia says the process, which took two years to complete, included rationalising its portfolio of packages and services.

“We discontinued many of the older legacy products that consumed a lot of headcount and resources and contributed little to the bottom-line. We also retired and wrote-off lots of old equipment and replaced them with new machines that are capable of running at much higher units per hour and producing more sophisticated products that give higher operating margins.” The rationalisation programme completed, the group now operates with a headcount of 7, 000 from a high of 10,000 2 years ago.

Notably, the 10,000 workers then were doing relatively the same level of business that the current 7,000 are doing now.

The rationalisation, Chia notes, also saw the closure of Unisem’s operations in Wales as the facility had out-lived its usefulness and the consolidation of its Batam operations which resulted in a more focused area of business mainly in the automotive space.

“We also tweaked our profile of customers to include some Tier-1 players in the industry, blending with our old profile of mainly integrated circuit design houses, providing more predictability and stability of utilisation rates at our factories,” he explains.

The improved profit figures , it says came from the change in product mix, lower overhead costs at its Indonesian subsidiary post restructuring exercise, grant income, and lower interest expense while revenue was boosted by higher sales volume and the company’s ability to sell its products at higher average prices. Currently, Unisem’s earnings before interest, taxes, depreciation and amortisation (EBITDA) margin average about 25%, with the group expecting this to further improve with higher utilisation rates in the quarters ahead. Its debt stands at around RM280mil now.

“Our cash flow is strong and our capex is restrained, we should be debt-free by next year,” Chia says.

Part of Unisem’s fresh business strategy is to target new business types. “Rather than support start-up companies which consume a lot of engineering and other resources coupled with uncertain success rates, we are targeting more Tier-1 players and mid –size companies as our customers,” says Chia.

Still, in the days ahead, challenges remain.

“Our main challenge, going forward is to maintain a consistently high utilisation rate at our facilities and therefore reduce cyclical earnings, Chia says, adding that its new business strategies should help reduce the volatility generally associated with the business. In his recent note on the company, Kenanga Research analyst Desmond Chong points out that Unisem’s second quarter results were above expectations largely due to better than expected utilisation of about 70% and a faster-than-expected turnaround.

Following the results, Chong adjusted his target price on the firm to RM1.64 from 86 sen previously and increased his FY14-FY15 net profit estimates for the company by RM10.9mil and RM17.8mil to RM28.6mil and RM44mil respectively.

Among risks to his “market perform” call on the counter are lower-than-expected sales and margins as well as possible weaker consumer sentiment as globally, economies remain fragile. Meanwhile, the 12-month average target price for Unisem by all the 9 analysts who cover the company stands at RM1.91, according to Bloomberg.