Kan, who was made the chief executive officer of The Star Radio Group last year, first joined The Star in 1989 as a senior advertisement executive.

A Bachelor of Arts graduate from Universiti Kebangsaan Malaysia, he has held various managerial positions within the advertising department, including general manager, senior advertisement manager and senior manager, advertising and business promotions.

He was also executive vice president, print business, in 2013 and group business director with an additional role of COO, print, in 2011 where he oversaw the daily operations of the print business, a core revenue generating component for the group.

Within The Star Media Group, Kan, 53, currently sits on the boards of Rimakmur Sdn Bhd and Capital FM Sdn Bhd, while externally he is one of the board members of the Malaysian Newspaper Publishers Association.

Kan will continue to oversee the operations of The Star Radio Group comprising Red FM, Suria FM, 988 and Capital Radio.

June H L Wong, who was promoted to group chief editor last year, has been given a wider portfolio as the company steps up its digital and television plans.

June will also help Chun Wai to carry out the media group’s convergence plans to bring together its various platforms.

Leanne Goh has been appointed acting group chief editor, taking over the position held by June.

Goh, who was the deputy group chief editor, joined the company in 1984 after graduating from Universiti Malaya with a Bachelor of Arts (Hons) in English Literature.

She moved up the ranks from reporter and senior writer to chief reporter and editor and worked at the news, education and Sunday Star desks.

She is the main person behind several education pull-outs and projects, including the Newspaper in Education (NiE) programme which has won international recognition.

As the executive editor and Sunday Star editor, she was overseeing the main paper on Sunday, Sunday Metro and Star Education.

Chun Wai said the changes were part of the company’s ongoing exercise to strengthen itself in a more demanding and challenging environment.

“The print segment remains the core platform, but we are also on a journey to play a dominant role in digital, radio and television, which will have an impact to the company in the years ahead,” he said.

He said June’s 30-year experience as a journalist would help to strengthen the content of the various platforms, adding that “content is still king”.

Chun Wai said The Star Online was in pole position, while its radio group was making dramatic and unprecedented strides for online listenership.

The Star introduced the CIMB-Asean ePaper Collaboration of four newspapers last month, making it the first in the region. Last week, it also launched its e-commerce shopping site.

The 40-year-old Tan brought with him nearly two decades of experience in advertising and media agencies. 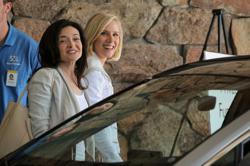