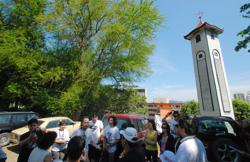 KUCHING: Sarawak has sought some RM800mil in federal funding to build a new deepsea port and upgrade the airport in Tanjung Manis as priority projects to support the halal hub development in Mukah Division in the state’s central region.

Tanjung Manis Development Sdn Bhd executive director Hashim Bojet said designs for the two proposed projects had been completed and submission for funds had been made under the 10th Malaysia Plan.

“The proposed RM300mil new deepsea port will be sited near to the Rejang River mouth. The upgrading of the existing airport is expected to cost about RM500mil.

“We hope to get the funds soon to start the infrastructure work early next year. Our target is to complete the two projects by 2012 or 2013,’’ he told StarBiz yesterday.

Hashim said the development of the halal hub was on track, with the necessary infrastructure already in place under Phase I, which covers 16,000ha.

“The entire halal hub development up to 2030 is expected to attract some RM25bil in investment,’’ he added.

Technical colleges, hotels and resorts as well as new housing projects have been planned for Tanjung Manis.

Tanjung Manis Development is a wholly-owned subsidiary of state-owned Sarawak Timber Industry Development Authority (STIDC). It is the project manager for the halal hub and other developments in Tanjung Manis, one of the five new growth nodes in the Sarawak Corridor of Renewable Energy (SCORE).

Hashim, who is also STIDC deputy general manager, said a specialised new deepsea port was a must to support the halal hub development as raw materials and halal products have to be handled separately from other types of cargoes.

The upgraded Tanjung Manis Airport can accommodate Boeing aircraft and facilitate the speedy transport of halal products for overseas markets, according to Hashim.

A railway project has been planned to link Tanjung Manis and the proposed Samalaju Industrial Park, Bintulu where energy-intensive industries will be located.

Hashim said Tanjung Manis would be accessible from Sibu when a proposed 88km-long road would be ready by March next year. The road will be connected by a bridge at Batang Serdeng, which is expected to be completed by the end of this year.

Without the direct road link, travellers to Tanjung Manis now have now to use boats for a 30-minute ride from

Sarikei, the nearest town. The road journey from Sibu to Sarikei takes another 50 minutes.

“When the Sibu-Tanjung Manis Road is ready, it will bring in more investors to Tanjung Manis,’’ said Hashim.

Tanjung Manis, which is home to Malaysia’s largest integrated timber complex, had received some RM2bil in public and private sector investments, according to Hashim.