“I have a deep commitment for social justice and helping others,” he said in a recent interview.

Warwick is also the chairman of Resource Alliance, a registered non-profit charity based in Britain with offices in Malaysia, India and Kenya. “The current problem with NGOs is that they are not familiar with the techniques to raise funds. My job is to help them specifically in this area,” said Warwick, who has been involved in fund raising for over three decades.

He added that this could be achieved by organising seminars and workshops to engage people in the various techniques available.

“I train and consult the NGOs on the psychology of donors. Different approaches are required when asking for donation from individuals and companies,” he said.

“NGOs who are seeking donation from companies or institutions may need to know the right techniques in getting contacts from them. High level contacts are needed to reach the managing director and chief executive officer of these organisations.

“Of course the purpose of donation is important too and shouldn’t be something controversial,” he said.

As for individual contribution, Warwick said NGOs could reach the donors via phone calls, letters as well as approaching them on the street.

“One thing I’ve learnt from this job is that, once we manage to get the individual donors, the possibility of them donating again is very high. 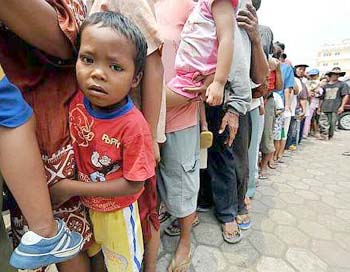 Scavengers with their children wait for donation in Tangerang, Indonesian. The problem with NGOs is that they are not familiar with the techniques to raise funds — AFP

“It is common to see them donating again in the future, which is different compared with companies or institutions, which usually contribute only for a certain period,” he said.

While it would take some time to change the habits of people in giving, those who used to only donate to mosques, temples or churches are now slowly giving financial support to NGOs for their humanitarian causes.

Warwick said the current economic downturn would have an impact on fund raising in terms of the amount received.

“However, the lack of donation received is just temporary as people are still willing to give during the good or bad times.

“That’s why it is very important for NGOs to establish themselves so that they would receive continuous support from their loyal donors,” Warwick said.

He said an unknown NGO might find it hard to persuade people to contribute during the economic downturn as people were unlikely to be convinced of their establishment.

Warwick is optimistic of the future for NGOs in Malaysia, Thailand and other Asian countries.

“There is great optimism and dynamism in this sector in this region.

“I’m very impressed with the commitment shown by people here to engage with NGOs in helping the needy and at the same time doing something meaningful for themselves,” he said.

Warwick said his training activity was fully self funded with no charges to NGOs for the seminars and workshops.

“I paid everything including the flights, accomodation and daily expenses as the immense satisfaction working with NGOs is something special to me and can never be expressed in words,” he said.

Born in 1941 at Pitsburgh, Pennsylvania, Warwick started to be involved in fundraising in the 1970s when he was working as a political organiser at Berkeley, California.

He became a full time fundraiser in 1979 and since then, has taught fundraising in the six continents to NGOs from more than 100 countries.