Exciting times ahead for hospitality sector

Market to see additional 5,600 rooms with 4 and 5-star rating

THE Klang Valley hospitality market can look forward to exciting times ahead with more new hotel developments and the entrance of more prestigious hotel players.

Over the next three years, Klang Valley will see an addition of close to 5,600 hotel rooms with four and five-star rating.

Among the world-renowned brands that will make their debut are the 240-room Four Seasons Hotel in the KLCC vicinity that is scheduled for completion in 2013, while the St Regis Hotel in KL Sentral, with a minimum of 200 hotel rooms, is scheduled to open for business in 2014.

According to Zerin Properties chief executive officer Previndran Singhe, the entrance of more prestigious hotel players in the local market would act as a magnet to attract other international brands such as InterContinental, Sofitel and The Raffles to Malaysia’s shores.

“There is still good growth opportunities in the local hospitality market, especially for niche players such as luxury heritage hotels in Kuala Lumpur,” Previn told StarBiz.

“Several five-star hotel players made some exciting announcements in the first half of this year.

“They include the approval for the 450-room Grand Hyatt Hotel at Jalan Pinang, Kuala Lumpur, and the entry of the prestigious St Regis Hotel,” Ooi said. 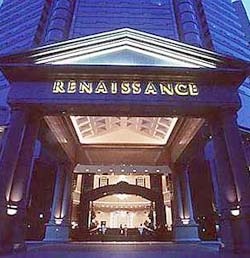 Renaissance Kuala Lumpur is being refurbished at a cost of RM153mil.

The 40-storey Grand Hyatt Hotel, to be developed by the Brunei Investment Agency, will house 450 rooms and estimated to cost RM360mil.

Another proposed project is the redevelopment of Bangunan MAS by Permodalan Nasional Bhd (PNB).

PNB acquired Bangunan MAS from Malaysia Airlines Bhd for RM130mil two years ago and intends to redevelop the 35-storey building into a hotel and apartments.

Knight Frank Research, in its latest Real Estate Highlights, said with rising operational cost and tougher economic environment, the local hotel industry was expected to undergo challenging market conditions in the second half of this year.

It noted that the current supply of five-star and five-star hotel rooms in Kuala Lumpur stood at 6,760 and 9,120 respectively, with the bulk of the supply located within the tourist belts in the city such as Jalan Sultan Ismail, Jalan Ampang, Jalan Bukit Bintang and the KLCC locality.

The five-star 438-room One World Hotel in Bandar Utama made its debut in January. 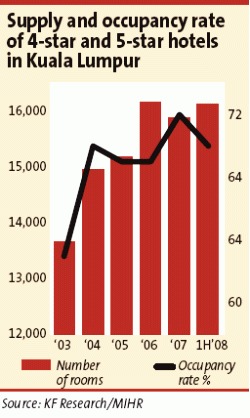 The average occupancy rate for both four-star and five-star hotels in the city during the first six months of this year was 70%, which was 2% higher compared with the same corresponding period in 2007.

Impiana KLCC will be adding another 180 rooms to its current 335 rooms while Berjaya Times Square Hotel & Convention Centre’s three-phase refurbishment and redevelopment exercise costing RM20mil is expected to be completed in September.

The Renaissance Kuala Lumpur’s RM53mil facelift will be completed next year.

The report said the average room rate (ARR) for five-star hotels during the January to June period was RM370, higher than RM320 recorded for the corresponding period in 2007. 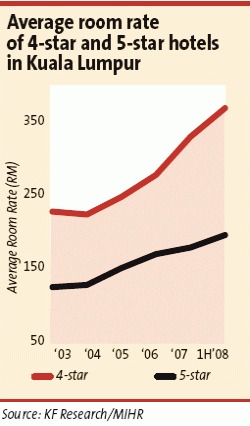 The ARR for five-star hotels during the same period was RM200, 10% higher than RM180 recorded last year.

Higher tourist arrivals and receipts in the first six months of 2008 have contributed to the strong performance by the hotels.

Meanwhile, the setting up of Pemudah, a special taskforce to reduce red tape in the application of licenses and permits for the setting up of new hotels, in February is expected to give a boost to the local hotel market’s competitiveness in the region.