KUALA LUMPUR: Khazanah Nasional Bhd has not “missed the boat’’ in terms of investing in distressed financial assets following the subprime meltdown.

Managing director Tan Sri Azman Mokhtar remained confident that there was “still time” to invest. He expects “investments to rise’’ from the 12% of foreign assets the government investment arm currently holds.

“We do not think there is really a first mover advantage,’’ he said, referring to some global funds and sovereign funds from China and the Middle East that had snapped up stakes in several global banking groups, including Citigroup Inc, UBS AG and Morgan Stanley, since the subprime credit crunch began. 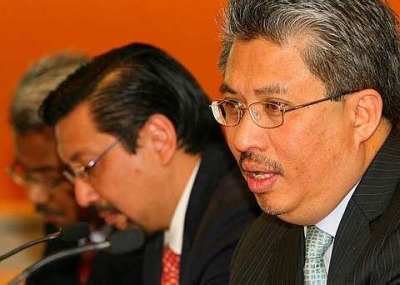 Amid the global rush to buy up stakes in international institutions following the subprime meltdown, Khazanah instead became a net seller in the past 12 months. It reaped gains of over RM6.8bil by divesting its stakes in companies such as Excelcomindo, Mobile One, Parkson, Lippo Bank and RHB Bank Bhd.

Azman would not say where Khazanah’s focus of investment would be next but it was evident that it was looking at China, India and the Middle East, among others. To source for opportunities, the agency has set up an office in China and will be opening offices in Mumbai before the year-end and the Middle East early next year.

Locally, the move to gradually sell down its stakes in government-linked companies (GLCs) under its portfolio will continue as part of the Government’s efforts to boost liquidity in the stock market and to raise funds for overseas investments.

“We have always maintained that we will gradually reduce our stake when the time, price and market is right,’’ he said.

Azman was speaking to reporters after releasing Khazanah’s fourth-year annual performance review. Khazanah’s portfolio net worth rose 60%, or RM19.8bil, to RM53bil as at May 31 from RM33bil in May 2004. This translates to a compounded annual growth rate of 12.3%.

Azman said the GLC transformation programme was intact and 40% complete and that there were improvements in the earnings recorded by the GLCs. The top 20 GLCs' combined earnings jumped to RM19bil in 2007 and their market capitalisation increased by 58% to RM85bil from 2004.

“We are pleased with the performance of the GLCs,’’ Azman said. Despite that, 24% of the key performance indicators (KPIs) were not met by the GLCs due to various factors.

With the recent increase in fuel cost, a “realistic’’ review of the headline KPIs could be expected. He expected the GLCs to weather the impact of higher fuel prices as they were much stronger than four years ago. The Government recently increased petrol prices by 41% and diesel by 63%.

On carmaker Proton Holdings Bhd, Azman said it might form an equity partnership within five years for greater economies of scale.

Talks with Volkswagen AG and General Motors Corp (GM) last year for a partnership ended after the Government felt it needed to give Proton more time to turn around.

Proton has several technical alliances but, to Azman, scale, size and reach mattered in the motor industry. “Proton had not reached the kind of export penetration that we wanted when we set it up 25 years ago,’’ he said.

“We believe we are in a better position now because there has been some operational turnaround, so there is momentum now,’’ he added.

Azman said a partnership would have to “consider an ambition to retain Proton’s brand, supply and distribution network. We need an alliance strategy ... we still have some time to review it.’’

He declined to say whether talks with Volkswagen or GM would resume.

The Iskandar Malaysia economic corridor will remain an important project in Khazanah's portfolio. Azman said talks were still under way to get a theme park operator and there would be other attractions to complement the theme park.

The project had attracted RM36bil in committed investments over a 19-month period, which is 77% of the RM47bil needed for the first five years. Land prices had also escalated from RM5 per sq ft in 2005 to an average RM50psf this year.