Executive director Chang Khim Wah said that to date, some 50% of the 500 single- and double-storey terrace houses had been taken up. 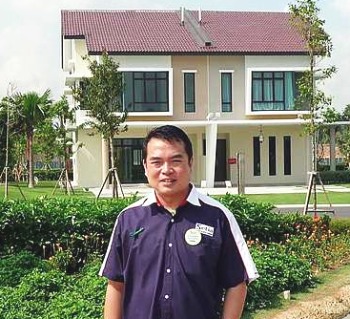 Chang in front of a show house at Setia Eco Gardens

“The response is considered positive in view of the current market situation where consumers are becoming more cautious in their spending,” he told StarBiz yesterday at the tree planting ceremony at the Setia Eco Gardens site in conjunction with World Environment Day 2008 last Thursday.

Chang said the scheme on 383.64ha, which would take eight years to complete, comprised 10,000 to 20,000 mixed properties with a gross development value of RM2bil.

The project is the first nature-inspired township in Johor and the company’s second eco-friendly project after the Setia Eco Park in Shah Alam.

Chang said this was the best time to buy properties as prices would definitely go up in the second half and would continue into next year due to the surge in prices of raw materials and fuel.

“Generally, house buyers can expect the prices of new houses to increase at least by 20%, depending on the economic situation,” he said.

Chang said Setia Eco Gardens also had attracted Singapore buyers, especially businessmen in the Jurong and Tuas areas as it was easily accessible from Singapore via the Second Link crossing.

He said the project's location, about 5km from the Johor State New Administrative Centre in Nusajaya, was another attraction to buyers.

Chang said the company would be launching the semi-detached houses at Setia Eco Gardens towards the end of the year, targeting high-end buyers.

“Demand for high-end properties in Iskandar Malaysia is on the rise, especially with the influx of local and foreign investors to South Johor,” he added.