THE Golden Triangle of Petaling Jaya, comprising Bandar Utama, Damansara Perdana and Mutiara Damansara, is poised to be one of Malaysia's leading “happening” places.

This modern leisure, entertainment and shopping hub got a further boost this year with the grand opening of the 1 Utama Shopping Centre's RM300mil Phase 2 in January and the completion of the Sprint Expressway's Penchala Link in February. October is expected to see the completion of The Curve, Petaling Jaya's centre of fashion and dining with 166 fashion outlets, 79 F & B outlets, an art village and a boutique hotel.

The Cathay Cineleisure will be opened this December. This entertainment hotspot will have a 20-screen cineplex, a 60-lane bowling alley and clubs.

How do the three developments stack up?

·Mutiara Damansara: The attractions are, you can say, big. You have Asia's largest Ikea, South-East Asia's flagship Tesco store, and the Ikano Power Centre where every store is like a mini anchor.

The Curve and Cathay Cineleisure are located just next door.

·Damansara Perdana: It has four fairly unique attractions albeit on a smaller scale – The Place (a cosy, tropical-style food and beverage centre with palm trees and water features); the Tropics shopping centre (initially meant to be a neighbourhood centre but its 110,000 sq ft of net lettable space is being turned into the country's first factory outlet, with an anchor tenant, two junior tenants, 135 retail lots and many kiosks); the Metropolitan Square; and the Perdana Walk, a belt of alfresco eateries, similar to the Bintang Walk.

When this township is completed in 2011, it will have 14,500 residential properties (including bungalows priced around RM5mil). Its residential and working population alone is expected to sustain the viability of its commercial components.

·Bandar Utama: This is the more established of the three developments. It boasts the 1 Utama shopping centre and Centrepoint, a neighbourhood-style retail centre.

The new extension has made 1 Utama possibly the biggest shopping centre in Petaling Jaya with 600 retail lots, a total gross area of 5 million sq ft and a combined retail space of 1.68 million sq ft. There is also a proposed business class hotel, medical centre and a retirement village in Bandar Utama.

It may not be too long before more people choose to hang out in this exciting hub rather than drive to Kuala Lumpur and suffer the city's traffic jam. For those who like to dine alfresco or chat with friends over a cup of cappuccino, the Golden Triangle of Petaling Jaya offers numerous eateries in a modern and conducive setting compared to congested Bangsar where finding a parking space is always difficult.

High-end developments such as Aman Suria, Damansara Legenda, Kota Damansara, Taman Tun Dr Ismail, Bandar Utama, and Country Heights Damansara have markedly increased the level of affluence in the area. The opening of the Sprint highway has also brought the affluent Sri Hartamas and Mont' Kiara areas closer to this exciting hub.

Property prices have surged in recent years with strong demand for this prime location. For example, when the high-rise apartments in Damansara Perdana were launched in 2000, they were priced at about RM150 per sq ft (psf). The price shot up to RM220 to RM250 psf in 2003 and it is projected to hit RM350 psf next year. Compare this to the RM400 to RM450 psf for condominiums in Mont' Kiara, a few minutes' drive away.

Likewise, retail lots in The Tropics were priced around RM500 psf two to three years ago, but now the developer's selling prices of shop lots in the Metropolitan Square are around RM1,000 psf!

It is a success story for MK Land Bhd whose subsidiary Saujana Triangle Sdn Bhd has sold RM1.8bil worth of properties in the RM8.3bil Damansara Perdana since it first launched Malaysia's first e-lifestyle township in 1996. Things are moving quite fast these days for Damansara Perdana.

Like in most commercial developments, the shop offices in the Perdana Business Centre were vacant for a few years after they were completed in 1999.

However, over the past year or so, more and more shops and offices are being occupied.

There is a nice budget hotel here. The roads are wide and the developer has placed colourful street objects to spruce up the place. There is plenty of surface parking.

There is also a multi-feature swimming pool, consisting of a leisure pool, a bubble tub, aqua aerobics, and water jets among others.

“Rentals have risen quite fast and a lot of people are moving into the shop offices. There were many smaller family businesses during the last six months but of late, the weaker tenants have moved out. Coming in are more established companies like 7-Eleven and Hong Leong,” he said.

On the Tropics, Chan said things were still “a bit slow”. “We're in the process of doing a few things like livening up the place with street arts like those in Tokyo's Roppongi Hills and getting a fashion group as anchor tenant,” he said, adding that there were plans to have a children's centre which would among other things have a child development centre and a library where one could rent toys.

There would also be a Penang lifestyle centre where people can enjoy Penang hawker fare.

He said the Metropolitan Square's ground floor shops had been fully sold.

“People queued up to buy the shops when we launched it last year,” he said, adding that the first condominium block with 396 units had been sold out while the second block with 252 units is about 50% sold.

s While everyone seems to be zooming into this Golden Triangle, there are fears that the whole place may face traffic congestion in future. However, for the moment, traffic situation is still all right.

Checks showed that during weekdays, especially in the morning and afternoon, the shopping centres and hypermarkets here are fairly quiet. 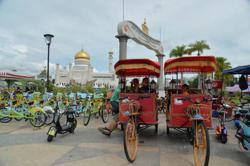