The company, the ice-cream arm of Unilever Holdings (M) Sdn Bhd, has been in the market for the past 38 years. It commands about 30% share of the local ice-cream market.

“We are confident of growing our market share, but that is not the only thing. The bigger task has been to grow the industry. As a pioneer and market leader, we are responsible for that,” he told StarBiz.

Raman said there was potential for expanding the industry, mainly based on very low ice-cream penetration, especially the high-end products.

“Per capita consumption of ice-cream in Malaysia is only two litres per annum compared with 22 litres in the United States,” he said, adding that a regular Malaysian consumer ate an average of about 7 to 8 litres a year, just like Europeans.

According to Raman, contrary to the perception that ice-cream is highly fattening, the fat content in ice-cream is lower than that in a pack of chocolates or potato chips.

“In Scandinavia, due to the nature of the product, mothers give ice-cream instead of milk to their children,” he added.

Raman said Malaysia had rapidly progressed economically and socially and the main challenge was to provide the right products to consumers.

“The bulk of the local market is for lower end ice-cream. I think consumers are willing to pay for dearer ice-cream provided you have the right innovation,” he said.

For this reason, Raman said when Wall’s recently launched its new Wall’s Selection flavour, the Caramel Crunch, it introduced for the first time take-home ice cream in transparent packs.

“We expect to make an impact with these better value products. Wall’s Selection is the beginning of the journey,” he added.

It has also launched a new flavour for Paddle Pop called Twisters.

On branding, Raman said over the last 38 years, Wall’s contemporarised the brand at least three times, the last one being in January last year.

Wall’s made its local debut in 1965, introducing ice-cream in tubs and cups, before introducing sticks and cones. Cornetto, one of its popular brands, was launched in 1972. Wall’s worldwide currently celebrates its 100th anniversary.

Typically, two of its largest consumer segments are the children's segment, with Paddle Pop, and young adults, with Cornetto.

Wall’s boasts a product line of more than 50 items.

“We have from Paddle Pop, which is priced at 40 sen to Cornetto at RM2 and Wall’s Selection at RM9 for the family. We have ice-cream to suit virtually all occasions and the entire cross-section of the population,” Raman said.

Wall’s products are now available at some 20,000 retail outlets nationwide.

The company, which is targeting to double sales growth this year, is looking at five new launches in 2004.

On advertising and promotion (A&P), Raman said Wall’s spent more than 10% of its total turnover on print, billboards and TV advertisements, which made up the bulk of its A&P budget. Wall’s was, in fact, the first to advertise ice cream on TV.

“The budget pattern has changed dramatically, with a bigger share going to the print media,” he added. 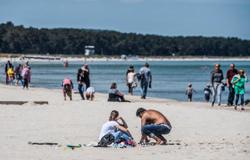 Germans are going for holidays... in their own country