The construction of PNC would start in a month's time, undertaken by Golden Hope Builders Sdn Bhd, and would take 30 months to be completed. PNC is owned by Puteri Nursing College Sdn Bhd, a subsidiary of KPJ Healthcare Bhd

KPJ chairman Tan Sri Muhammad Ali Hashim said the PNC dedicated campus in Nilai would be able to train up to 1,200 students within five to 10 years.

“This business arrangement is not just a win-win for both parties but also serves as a social responsibility,” Ahmad Sarji told a press conference after a signing ceremony between GHPJ and Puteri Nursing College Sdn Bhd in Kuala Lumpur yesterday.

He added that with about 32,000 registered nurses in the country now, the nurse to population ratio was out 1:750.

“In developed countries, the nurse to population ratio is between 1:200 and 1:300. Therefore, as Malaysia becomes fully developed, the demand for adequate and trained human capital to support the service increases,” he said.

He added that measures needed to be taken to accommodate the growing demand for competent and well-trained nursing staff and services. 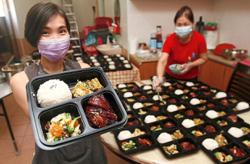