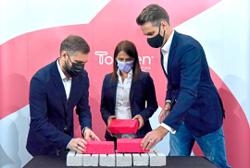 THERE is no denying that the man is a “human dynamo”. He is outspoken and has helped to turn around some of the ailing shopping centres in the country.

Meet Richard Chan Chee Keong, president of the Malaysia Association for Shopping and Highrise Complex Management (PPK). As he stood on stage at a recent PPK dinner to receive a memento from Culture, Arts and Tourism Minister Datuk Paduka Abdul Kadir Sheikh Fadzir in appreciation of his 19 years of untiring efforts in the PPK, many in the ballroom must have wondered how this man could still be running around when he had just recovered from a major operation last year.

As a PPK member noted, the retail industry needs dedicated people like Chan who can make things happen. With the war in Iraq and the spread of the killer severe acute respiratory syndrome (SARS) disease, there are fears that the retail and tourism industries in the region would be adversely affected.

Already many shopping centres in the country are not doing well. Either they are being sold off or are half empty with hardly any shoppers. On the other hand, the highly successful big shopping centres are expanding while some suburban malls are also doing quite well attracting shoppers from surrounding housing estates.

However, challenging times are ahead especially for the shopping centre industry. A prolonged war in Iraq may see prices of imported products rising and this may have a direct impact on the retail business, especially international franchised chains that may have to pass on any price hike to consumers. Any SARS outbreak here may discourage people from visiting shopping centres and businesses would be hit.

Checks at popular shopping centres like Mid Valley Megamall, Suria KLCC and 1 Utama showed big weekend crowds. People are still bringing their children to shopping complexes and other public places. This belies the fact that all the 10 pharmacies that I have checked in KL and PJ have sold all their clinical masks although no one seems to be wearing them, at least for the moment.

Much is at stake should the Malaysian retail industry be affected by any global turmoil. Take the shopping centre industry as an example. Its size, value and contribution have a direct bearing on the health of the economy.

According to a PPK survey for the 4th quarter of 2002, the total number of shopping centres in the country was about 180 centres with gross floor areas from 80,000 sq ft to 4.5 million sq ft. This excludes abandoned and non-operational projects. Their total worth was RM28.8bil!

He said shopping centres contributed a total of RM1.53bil per annum or RM127.45mil per month towards manpower costs last year. This included personnel working directly with centre management and contract services that made up 14% of the total with the balance from employees working in retail outlets in the shopping centres. Shopping centre management costs contributed RM495.64mil per annum or RM41.30mil per month towards utilities last year.

He said rental rates had been dropping for many shopping centres for the first quarter of this year and many centres had difficulties finding tenants. Consumers were also cautious with their spending.

“On the other hand, poor performing shopping centres continue to suffer from high vacancy rates, reduced rental rates and deteriorating building conditions,” he said in his paper The current state of shopping centre industry and strategies to revive it at the 14th National Real Estate Convention 2003 recently.

“Worse of all, the weak economy and its bleak outlook are slowing down retailers' expansion plans. There are also limited choices of retailers in the market. At the same time, consumers are cautious in their spending and will remain so until there is clear indication of economic improvement,” he added.

He said the current poor performance of almost all strata-titled shopping centres had taught few shopping centre developers not to sell their retail space.

Tan thinks the industry needs a retail master plan to map out the retail development potential within a defined area for the next five to eight years.

“It is like a government structure plan for the retail industry. It should include policies and regulations and should be undertaken by the government with the participation of the private sector,” he said. Such a plan would ensure integrated development and consistent planning as well as to avoid wastage of limited resources and unnecessary duplication.

The master plan would allow private retail investors to understand the retail development of each area and to have a clear reference to determine their investment risk and return.