KUALA LUMPUR: Malaysia does not have to resort to an unconventional monetary policy as the country's deep bond market and diverse set of institutional investors are enough in absorbing a higher bond supply, said Bank Negara Malaysia Governor Datuk Nor Shamsiah Mohd Yunus.

She said although the Malaysian Government Securities (MGS) are on an increasing trend, the bond market has recorded a healthy bid-to-cover ratio.

According to her, Malaysia's large debt market mitigates the need for unnecessary unconventional monetary policies, which suggests that the government does not need to ask the central bank for assistance.

"The government does not have any urgent need to come to us; neither do they want to, given the risks to investor sentiment and market functioning, particularly when our bond market is working well,” she told a virtual senior editor briefing session yesterday.

Explaining further, Nor Shamsiah said that distinctive interest rates between advanced economies and emerging economies as well as different motivations are the drivers in asset purchase by the central bank.

"The bond market in Malaysia is more stable and less volatile; hence the need for large-scale asset purchases is not there," she said. 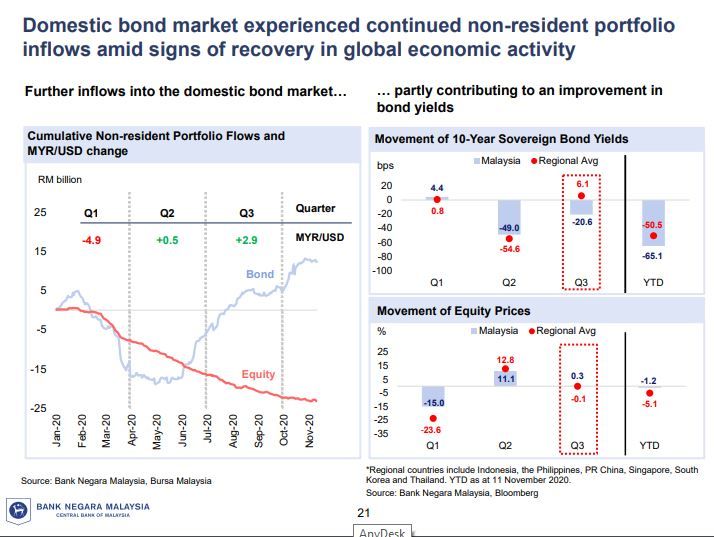 Globally, Bank of Indonesia as well as British and Australian central banks are focusing on unconventional ways to revive their economies, one of which is through direct purchases of government bonds to support the governments' economic stimulus measures in combating COVID-19 shocks.

Nor Shamsiah reiterated that in general, advanced countries' interest rates stand at around 0.1 per cent; hence, it requires them to embark on large-scale asset purchases in order to introduce additional economic stimulus.

"None of the emerging economies has an interest rate as low as the advanced economies; thus, when we do an asset purchase, it is to address market dislocation and excessive volatility in the domestic financial market," she said.

Addressing the concerns about Malaysia's exposure to sovereign debt ratings by credit rating agencies, the governor said Budget 2021 sets a medium-term consolidation path, with the fiscal deficit projected to be about six per cent of Gross Domestic Product (GDP) this year and to fall steadily to 5.4 per cent next year before dropping further to four per cent in the following three years.

"Looking from the percentage of government debt-to-GDP, the level stood at 52.5 per cent prior to the COVID-19 crisis and grew to 61.1 per cent, which is still lower than the median of the A-rated peers, which stood at 61.8 per cent. Malaysia has relied on the fiscal stimulus, additional expenditure and the strengthening of the social safety net by the government to cushion the impact of the COVID-19 shock to the GDP, resulting in an increase in the government debt level,” she said.

"When we look at the composition of government debt, it is one of the stimulus measures and will not result in a structural increase in operating expenditure; and once this fiscal stimulus has expired, the debt level to GDP and the fiscal deficit can normalise to a four per cent long-term pattern," she said.

Nor Shamsiah also stressed that rating agencies are considering other indicators, including inflation rate, volatility, fiscal consolidation, corruption and governance indicator, competitiveness of the economy, and flexibility of the economy.

"Malaysia's inflation rate and volatility are among the lowest among our peers. We have a consistent fiscal consolidation and we are also at the median of A-rated peers in terms of other indicators," she said.